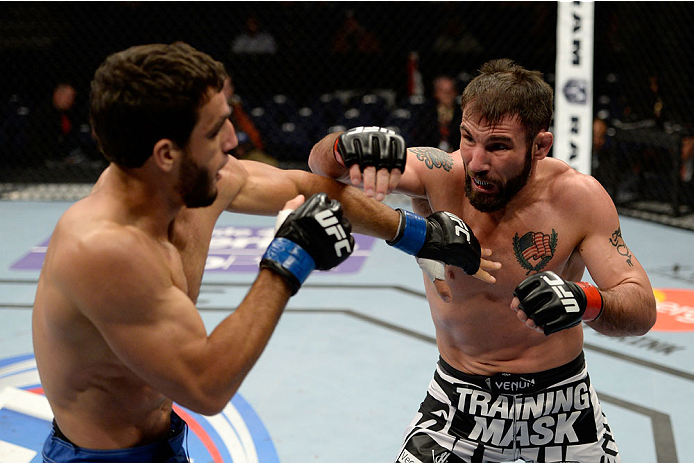 He’s got the first two segments down. On Saturday he hopes he delivers the strong finish when he faces Matt Wiman at UFC Fight Night in Austin, Texas.

“I want it (2014) to end with a win,” he said. “I want to win, I want to stay employed, and I don't care if I get a bonus or a finish, I just want to win this fight and stay employed. That's what it's boiling down to, ending the year on a positive note. The beginning of my year sucked and things have not been great, but through the year, the longer I've been going the better things have gotten, so I want to end this thing on a completely positive note and go into 2015 with the win and ready to go for a run.”

It’s resilience he probably picked up from his father, Thomas Flagg, who has been battling cancer but winning the fight, as he’s currently in remission and back on duty at his teaching job. Seeing his father getting his life back has removed one obstacle from Vallie-Flagg’s way, as he’s now able to focus fully on the task at hand, and that means getting back in the win column after back-to-back losses to Elias Silverio and Takanori Gomi.

“There have been very few instances this camp where I thought about having to go to the cancer center or thought about my dad possibly passing, so with his health coming back, I've been able to focus on training a considerable amount more, and I feel that my headspace for training is better, so not only am I focusing better, but when I'm at training sessions I'm at training sessions. It's done wonders for me.”

That doesn’t mean mom and dad will be in attendance in Austin for a triumphant return to the winner’s circle. In fact, they’ve never been to one of Vallie-Flagg’s UFC fights, and he’s cool with that.

“They'll watch it on TV and that's about it; that's a good thing,” he said, going on to explain why. “My first fight in the UFC, my mom went to a family wedding and he couldn't go because of work so he watched it by himself at the house and I think he had a harder time than my mom did watching the fight. They watch them, but they trip out, so I think it's better when they have a little bit of family around.”

They probably tripped out more than usual during his April brawl with Japanese star Takanori Gomi. For three rounds, it was a toe-to-toe scrap, with plenty of blood, sweat, and bruises to go around. Gomi left the Octagon with the victory that night in Baltimore, but both left the arena with a Fight of the Night bonus check. As for Vallie-Flagg, he had to make a quick phone call back home.

“The first thing I said (to my parents) was 'I love you guys, I'm okay, but I'm just a little bit busted up.'”

Those bumps and bruises were a badge of honor though, as anyone who can go 15 hard minutes with “The Fireball Kid” deserves kudos. That’s nothing new for the ultra-tough Vallie-Flagg, but he does admit that this one had a little extra something to it, considering his dance partner.

“Afterwards, when I went back into the locker room to take a picture with him, I knew that we had just thrown down and then I was like, man, that was with Takanori Gomi, a guy I respected in the game forever and ever. In that moment, it was pretty cool. And leading into the last round, you can see both of us smile at each other and try to hype the crowd up a little bit, and I got caught up in the moment of who I was fighting.”

It was the kind of fight where no one left that arena saying “man, I hope I never see that Vallie-Flagg guy fight again.” That almost makes it a win in the court of public opinion, but in the day-to-day reality of wins and losses, it stings both in the wallet and in terms of having a sense of job security. Yet Vallie-Flagg, as is his custom, tries to take whatever positives he can from the situation.

“It sucks that it was a loss, but I was exposed on some things that I really needed to work on and I got them pointed out to me later, so the positive in that is that I get to take away some stuff that I really need to work on to make myself a better athlete and some improvements on some other stuff,” he said. “I hate losing. It eats me up inside. I'm trying to sound positive, but it does eat me up. But if you can't walk away with some positive from any situation, then I think you're looking at life wrong.”

Vallie-Flagg, at 36, seems to have figured life out in that sense, and it’s why he’s one of the most popular figures among hardcore fans. He’s an old-school fighter who’s paid his dues, and despite the rigors of competing in this sport, he always has a smile for the world.

“I feel like I should bring something positive to every situation that I'm in, and give that to everybody that I run into and respect, and I think that rubs off on people.”

Just don’t talk to him about food, especially Austin barbecue before his fight in Austin.

“The diet's the hardest part for me,” he admits. “I really don't mind taking my lumps and getting beat up, being tired, lumpy and sore, but then on top of that I have to eat food that I don't like. That's the part that sucks for me.”

Yet in true Vallie-Flagg fashion, he finds the silver lining.

“The cool part is that I look really good right now,” he laughs. “I'm shredded.”

That probably won’t be the case on Monday morning after what he expects to be some festive victory celebrations at some of Austin’s finest eating establishments. But to get there he first has to deal with Wiman, the lightweight division’s enigma. When he’s on, the fighter formerly known at “Handsome Matt” is a tough out for anyone. But after nearly two years away from the sport, is he still that same fighter?

“I'm going into it expecting the best Matt Wiman that there is,” Vallie-Flagg said. “At one point, he took a year away from the sport and he came back throwing heat and looking good. So I'm expecting that Matt Wiman. I always think I'm gonna get the best version of somebody, especially with a kid like Wiman. He's very tough, very well-rounded, and he comes to fight all the time, even if there's time off. If I get bad Matt Wiman, hopefully I get a finish. If I get good Matt Wiman, we get Fight of the Night.”

Sounds like a plan either way, both followed by barbecue, lots of barbecue. That’s how you end a year.