Irene Aldana discovered MMA during her pursuit of a graphic design degree. After she graduated, the degree didn't matter, she knew her future was in MMA.
By Thomas Gerbasi, on Twitter: @TGerbasi • Mar. 26, 2020

Ten years ago, Irene Aldana didn’t even know mixed martial arts existed. But by October of 2010, she was about to put her Graphic Design degree to the side for a sport that would soon become her life’s passion.

“When I arrived from school to my home, I couldn't wait until the clock pointed to four o'clock so I could go to the gym and start my training,” said Aldana. “And I wouldn't leave the gym until 1am, 2am sometimes. I got obsessed with the sport. I found it very interesting how the body and the mind connected in this and I got involved and fell in love. I graduated and said goodbye to graphic design, goodbye to photography and I got deep into it.”

Today, the Culiacan native is ranked fifth in the world in the women’s bantamweight division, and after going 5-1 in her last six fights, a stretch that includes back-to-back victories over Vanessa Melo and Ketlen Vieira, she’s made a strong case for a shot at champion Amanda Nunes. And that sits just fine with the 32-year-old.

“I'll be ready for whatever the UFC wants, so if they want to give me a title shot next, I'll be ready for that,” she said. “Amanda is defending the 145 belt in May (against Felicia Spencer), so I think maybe if she wants to defend the 135 belt again, it would be at the end of this year. So, they may want to keep me busy before I can step in with Amanda, so if they want to give me one more fight, it could be Holly (Holm) or Germaine (de Randamie) next, and if I win, next would be Amanda. But if they want me to wait for Amanda, it's okay for me, too.”

That’s Aldana’s personality in a nutshell. She’s not demanding title fights, not making noise for the sake of making noise. She’s a fighter to the core, and the latest in a long line of Mexican prizefighters who prefer to do their talking in the ring or Octagon. And hey, she was born in the same city that produced legendary boxer Julio Cesar Chavez, so maybe that “speak softly and carry a big stick” thing is in the water in Culiacan, even though she admits that she didn’t know of the “El Gran Campeón Mexicano” when she was a kid.

“I didn't know about Chavez until I was older, and then when I realized that he was from there and his story and everything he did, I was so proud that he was from Culiacan,” said Aldana, who now makes her home in Guadalajara. But oh, what a story it would be if Aldana could become the UFC’s first Mexican-born champion while hailing from the same city as JCC. 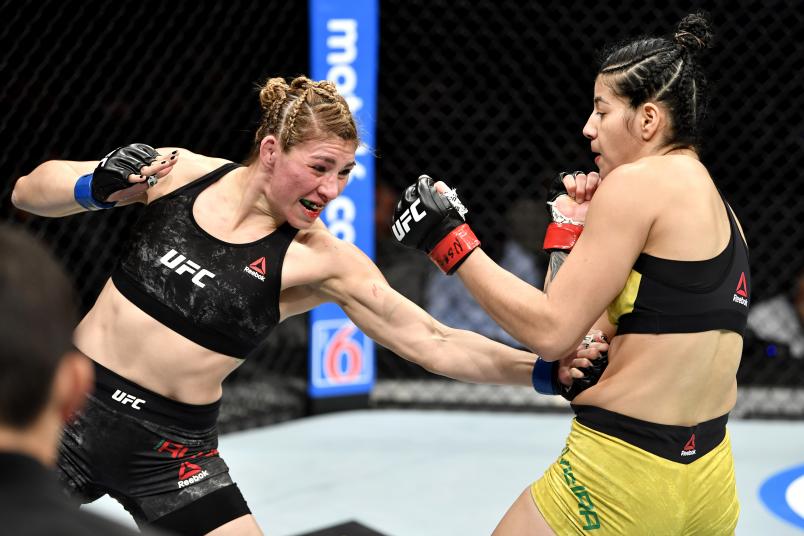 “We're making history,” she laughs, but reaching the top of the sport is serious business for Aldana. “This was my goal since I started in this sport and it would be awesome to be the first one hundred percent Mexican to win a UFC belt. I'm so proud to represent my country and my people, and I hope I can do a really good job.”

For all of this to happen in the space of a decade is pretty remarkable, but Aldana has paid her dues, both in the gym and on fight night, and though it was tough sledding at first, she soldiered on, even while her family wondered just what was going on with their recent college graduate.

“My family was overwhelmed with it,” Aldana laughs. “I only did three fights in Mexico and they were like, 'Okay, this is just a hobby, she's just having fun, she's not getting hurt.'”

Those three fights lasted a combined one minute and 18 seconds. Then Aldana went to Brazil for fight number four and that bout with Larissa Pacheco didn’t go as well.

“I had a really bad time in there,” she recalled. “My face was very, very swollen, and my family saw that fight. I got knocked down in the third round and they saw it and there really was a drama in my house. My mom was so mad – ‘Why are you doing this? You're getting hurt.’ I said I'm gonna do it anyway. So I did it and now they’re my number one fans.”

They’re not the only ones cheering for Aldana, who went on to a five-fight run in Invicta FC where she went 4-1 with three post-fight bonuses. That earned her a spot in the UFC in 2016, but she struggled in her first two bouts against Leslie Smith and Katlyn Chookagian, at least on the judges’ scorecards. Yet despite those two defeats, she earned a Fight of the Night bonus against Smith and dropped a split decision to Chookagian that many believed she deserved to win. To Aldana, though, it was an 0-2 start to her UFC career.

“It was a little overwhelming when I got into the UFC,” she admits. “I didn't have that much experience, and I got excited, I got nervous and it was a rollercoaster of emotions when I got there for the first time, and I made technical mistakes in my first fight. Then the second fight, I thought I won, but it was a close fight and could have gone anyway, so it wasn't really a bad, bad loss. I didn't debut with a win, so I really wanted that win, too, and it didn't happen, so it was a little hard for me. I went back to the gym, kept training, kept getting better, and knew that I had to get back to the win column.”

She got there against Talita Bernardo in January 2018 and she hasn’t looked back, with the only blemish since then a split decision defeat to Raquel Pennington in July 2019. So is Irene Aldana ready for the next step? You know she is.

“I won (against Bernardo) and I kept improving mentally and technically, and I kept getting more comfortable in the UFC cage, dealing with all the people and all the pressure that comes with being in a UFC fight. So I kept getting used to it and I'm more comfortable and I have more confidence in myself and in my team and things are getting better.”