Irene Aldana Can Sense Her Moment

The streaking Irene Aldana knows she's not far from a potential title shot when she fights Holly Holm.
By Thomas Gerbasi, on Twitter @tgerbasi • Oct. 1, 2020

Nine years after picking up mixed martial arts as a hobby, Irene Aldana may be one win away from challenging for a world title should she defeat Holly Holm in Saturday’s UFC Fight Night main event on Fight Island.

Such a significant change in her life prospects isn’t lost on the 32-year-old who once assumed she was going to be putting her graphic design degree to use, not painting pictures with her fists in an Octagon.

“I know this fight can take me to the belt,” she said. “I’m just one step closer to the belt and this is why this is a very important fight and it will bring the very best out of me.”

We’ve been seeing the best out of Aldana as of late, as she’s won two in a row and five of her last six, rising to the number six spot in the women’s bantamweight rankings. At number two is Holm, and while the top contender at 135 pounds, Germaine de Randamie, faces the number four ranked Julianna Pena this weekend, Aldana believes a win over the former champ, coupled with a first-round knockout of then-unbeaten Ketlen Vieira last December makes her case for a crack at Amanda Nunes’ crown a rock-solid one.

“I should be fighting for the belt next because I feel that I have done enough in my fights to be the next in line,” she said. “I beat Ketlen, at the time she was number two, Holly is number two, so I think this is going to be clear. There’s nothing more that we can prove. I want to take that belt to Mexico.”

A proud native of Sinaloa who now makes her home in Guadalajara, Aldana showed even before she joined the UFC roster that she had the Mexican fighting spirit in her thanks to a five-fight stint in Invicta FC where she went 4-1 with four finishes and three post-fight performance bonuses.

MORE: Holm vs Aldana Fight By Fight Preview | Germaine de Randamie Has A Point To Prove | Fighters You Should Know

That ability to finish opponents and put on exciting fights made her Octagon debut in 2016 a highly anticipated one, and while she lost that first UFC bout to Leslie Smith, the duo did earn Fight of the Night honors for their efforts. A split decision defeat to Katlyn Chookagian would follow, but since then, it’s been smooth sailing for Aldana, with the only hiccup being another split decision loss, this one to Raquel Pennington in July 2019.

So while this is Aldana’s first main event appearance in the UFC, this isn’t her first big fight. 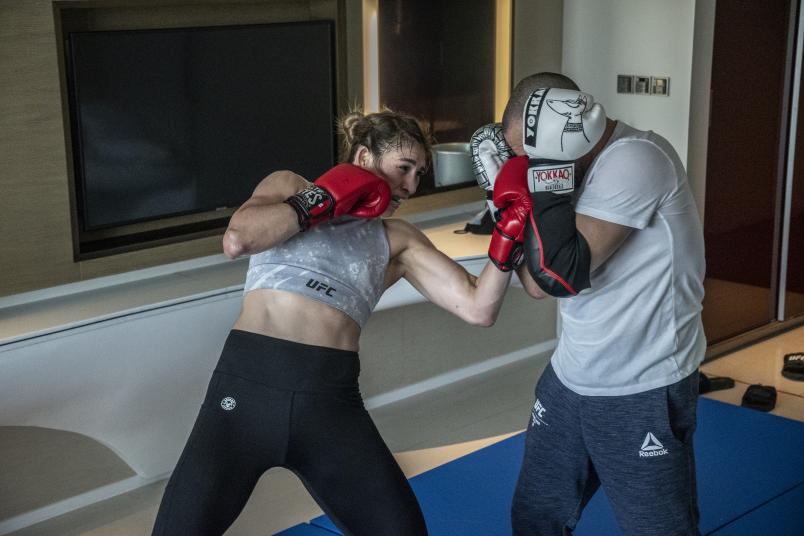 “Fighting a former champion, this is a great opportunity for me to prove myself,” Aldana said. “Beating somebody that already had the UFC belt is very significant for me, but I feel that this is one more fight and I’m just focusing on Holly as a fighter. I have fought for a title before, I have fought with great fighters and I’ve already fought with hard opponents. So I think this is just gonna be one more, and every time it’s gonna get tougher.”

Aldana likes that challenge, though, especially since she knows that even without fans in the stands on Fight Island, she has her nation on her side.

Sounds like quite the challenge for the veteran Holm, and Aldana agrees.

“I’m a great challenge for Holly because I’m aggressive, I’m technical and I fight like a Mexican.”