In His Eighth Fight For The UFC, The Light Heavyweight Is Putting The Pieces Together
By E. Spencer Kyte, on Twitter @SpencerKyte • Feb. 25, 2020

When you’re constantly watching fighters compete at the highest level, there are times when you can take for granted some of the basic, fundamental realities regarding what it transpiring in front of you; namely that getting there is only the first chapter in a much longer, far more complex story.

The days of athletes arriving in the Octagon as a finished product are largely gone and while some still exhibit a more complete skill set upon arrival than others, there is a larger portion of the UFC roster whose first two, three, four years are all about developing skills, acquiring experience, and maturing into a more accurate representation of who they are inside the cage.

Ion Cutelaba is a good example of this.

The Moldovan light heavyweight, who returns to action against Magomed Ankalaev in the middle of this weekend’s main card at Chartway Arena, made his promotional debut in June 2016 as an undersized 22-year-old bundle of energy, having won 11 of his first 13 professional bouts.

He’d spent exactly 29 seconds fighting in the second round, and his next longest appearance lasted a little over two-and-a-half minutes.

That night in Ottawa, the aptly nicknamed “Hulk” showed flashes of potential in a losing effort against Misha Cirkunov and since then, he’s continued to tantalize and tease, becoming an all-action addition to the 205-pound ranks, while not yet taking the big step forward many have been waiting to see.

“I think my performance is good, but there are always things to improve,” Cutelaba said through a translator when asked about his first seven trips into the Octagon. “I have improved my physical condition and stamina. About negative things, I have nothing to say because there are none.”

A playful smile acknowledging the obvious sarcasm chased the words out of his mouth.

“There have been several impressive moments and there will be many more in the future,” he added. “I just have to stay focused, determined and never stop evolving.”

But because he’s seven fights deep into his UFC journey and already shared the cage with a handful of established names, it feels like there is an expectation that the 26-year-old already be further ahead in his development; that by not yet morphing into a legitimate contender, Cutelaba has somehow underperformed.

It’s an assessment that feels a little hasty for a couple of reasons. 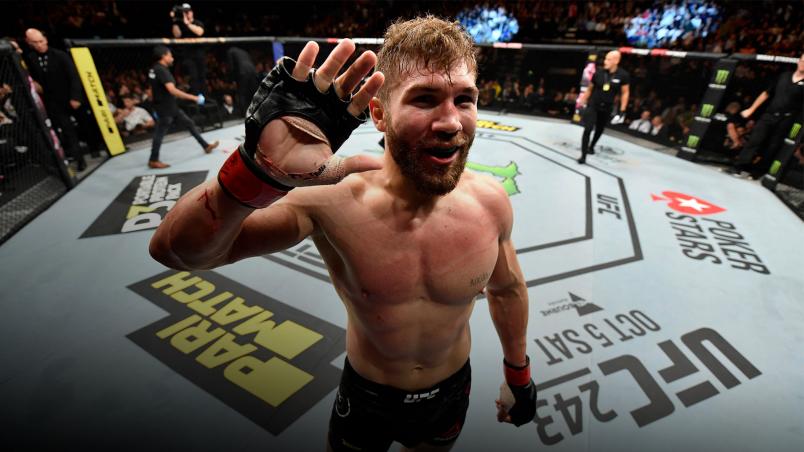 Ion Cutelaba of Moldova celebrates his TKO victory over Khalil Rountree in their light heavyweight bout during the UFC Fight Night event at Royal Arena on September 28, 2019 in Copenhagen, Denmark. (Photo by Jeff Bottari/Zuffa LLC)

First and foremost, Cutelaba was relatively untested and just 22 years old when he first stepped into the Octagon in the Canadian capital, and while seven fights is a solid sample size when it comes to diagnosing his potential, it’s also not quite big enough when it comes to making definitive statements about where his career will end up and the heights he could reach in the coming years.

Secondly, the light heavyweight and heavyweight divisions operate differently than the remaining weight classes in the UFC.

In most divisions, it takes young, emerging talents four, five, six fights — sometimes more — before they’re standing across the cage from a fellow rising star or battle-tested, Top 15 fighter. But at the two highest weight classes in the UFC, that wait time is drastically reduced and a couple solid performances can lead to you standing opposite a former title challenger in your sixth bout with the company.

“It is indeed pretty hard, but I never expected, nor would I wanted it to be different,” said Cutelaba, who followed up victories over Henrique da Silva and Gadzhimurad Antigulov with a second-round submission loss to Glover Teixeira last April in Sunrise, Florida.

It was the 40-year-old Brazilian’s 17th UFC appearance and Cutelaba’s 19th professional fight.

“I am a young fighter; I’m still evolving,” he added. “I have learned a lot during these last 18 months and I had to make many changes. It helped me become stronger, more confident and very determined.

“One day, I will become a UFC champion.”

After getting back into the win column in September with a hellacious first-round finish of former TUF finalist Khalil Rountree Jr. in Denmark, Cutelaba is set to venture back into the fray against another up-and-comer in the 205-pound ranks this weekend when he squares off with the streaking Ankalaev.

Where Cutelaba has struggled to find consistency and compete at a regular clip, his 27-year-old opponent has made four appearances in his first two years on the UFC roster, rebounding from a last-second submission loss in his debut to collect three straight victories heading into their main card clash Saturday evening on the shores of Chesapeake Bay.

Many see Ankalaev as a rising star and potential future contender, but the man he’ll share the cage with in Norfolk is not convinced.

“Who is Magomed Ankalaev?” Cutelaba said with a sheepish grin when asked to assess what his opponent brings to the table. “I'm kidding, of course. I studied his last fights though, and there is nothing impressive. I have to be careful not to hit him too hard.”

Hitting hard has been Cutelaba’s calling card since entering the UFC and his obvious power remains his greatest weapon whenever he steps into the Octagon.

But the fight with Rountree Jr. also showed an improved understanding of tactics and recognizing openings, as he shifted from trading in space to using his wrestling to ground the dangerous Muay Thai stylist.

Understanding those moments and making those on-the-fly adjustments are elements you can’t teach in the gym — they only ever take root when you’re forced to deal with them live and the only way to reach that point is through experience.

Saturday’s main card showdown with Ankalaev might be Cutelaba’s 21st professional fight, but it’s just his eighth in the UFC and he’s just now starting to put things together and figure things out, which means that big step forward that some believe is overdue could be just around the corner.