Friday night at the Scottish Rite Temple in Kansas City, Kanvas, Invicta FC is set to deliver its 18th action-packed night of fights, including a main event that will decide the No. 1 contender for the strawweight division.

At Invicta FC’s previous event in May, striking savant Angela Hill claimed the Invicta FC strawweight belt in an upset, split decision win over Livia Renata Souza. Without a doubt, “Overkill” has had an incredible 2016, with three consecutive wins in Invicta FC, including two KOs and now Hill is the proud owner of the 115-pound championship strap.

Live on UFC FIGHT PASS, two tough and talented women will battle to see who will earn the next shot at Hill. On top of that, there are seven scintillating struggles ranging from atomweight to featherweight, with future superstars throughout.

Here’s a breakdown of the Invicta FC 18 card: 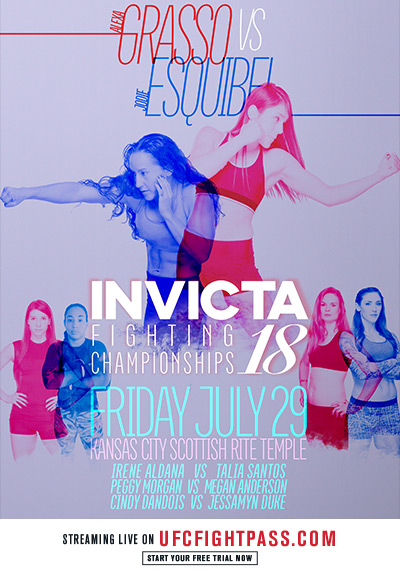 We, the Invicta FC faithful, know how deserving these fighters are for this opportunity, but, more so, we know how fun this fight is going to be. Many will characterize this title eliminator as a classic “striker vs. grappler” matchup, but, for those familiar, it is an “aggressive vs. aggressive” matchup. Neither Alexa Grasso nor Jodie Esquibel will allow their opponent to outwork or outpace them. Both fighters want to push their adversary until they break and that means good times for us, the happy viewer.

Both of these women have had a lot of success and growth in Invicta FC. The undefeated Grasso quickly became a fan favorite with three wins in the organization, which have all been a fistic feast as Mexico’s Grasso has punched and punched and punched her way to victory. Most recently, Grasso won a Fight of the Night unanimous decision win over Mizuki Inoue at Invicta FC 11, who is also on this card. As for Esquibel, the Team Jackson-Winkeljohn product went 3-1 in Invicta FC as an atomweight, including a win over Jinh Yu Frey. After a stint on The Ultimate Fighter 23, Esquibel is returning to Invicta FC to a higher weight class, with her focus on a big win and a title shot just beyond it.

Here she comes to save the day! On Tuesday of this week, it was announced that Agnieszka Niedzwiedz’s original opponent, Claudia Rey, would have to withdraw from the bout. Thankfully, Christine “Knuckles” Stanley was ready to step up on ultra-short notice to scrap with the undefeated Polish prospect who is making her Invicta FC debut. Riding a four-fight win streak that includes back-to-back Ws within the promotion, Stanley is a banger who throws heavy strikes early and often, as she showed in her one-sided unanimous decision win over Shannon Sinn at Invicta FC 17. Stanley will be quite the test for the 21-year-old sporting a 7-0 pro record and nicknamed “Kuma”. With six of her pro wins by finish, Grappling Krakow’s Niedzwiedz will be set to meet Knuckles head on as both will seek an exciting stoppage.

Let’s be honest, Jessamyn Duke desperately needs a win and it’s not going to be easy for “The Gun” to get one against the “Battlecat,” Cindy Dandois. At Invicta FC 2, Duke made an exciting pro debut with a third-round TKO. From there, she grabbed a couple more Invicta FC wins, did pretty well on The Ultimate Fighter 18, got a win inside the Octagon and it’s been downhill ever since. As she aims to end a four-fight losing skid, Dandois is set to continue her unlikely career resurgence. After three and a half years of self-imposed retirement to start a family, the judo black belt with a 5-1 pro MMA record returned to fighting against the ultra-tough Evinger at Invicta FC 10. A few events later, she secured a second-round triangle choke over Megan Anderson at Invicta FC 14, bringing new life to her career. While Battlecat wants to stoke her flame, The Gun needs to find her spark again.

Megan Anderson’s Invicta FC debut in 2015 didn’t go her way, but she has been a star on the rise in 2016. A move to Kansas City and back-to-back knockouts in Invicta FC has put the inked upstart on everyone’s radar. But this sport is as fickle as they come and one’s next opponent can steal one’s thunder in an instant, which is what Invicta and UFC vet Peggy Morgan is planning. Not many can match Anderson’s 6-foot tall frame, except the “Daywalker” is 6’1” and not shy about trading punches in bunches. Expect a mess of lanky limbs flying with purpose as Anderson tries for a win streak and Morgan targets an upset.

Originally, Texas’ Tessa “The Typhoon” Simpson was set to make her Invicta FC debut in May, but the bout was scrapped and here she is, ready to go in July. Simpson’s 4-1 pro record is deceptive, as she made her pro debut back in 2009 and has had two multiple year gaps in action since then. Regardless, Simpson is a game ground specialist having, most recently, earned a third-round mounted triangle keylock submission against Japan MMA veteran Satomi Takano after nearly three years on the shelf. Tangling with Simpson will be the returning Simona Soukupova. England’s Soukupova was last seen in Invicta FC in 2013, locking up a second-round guillotine choke of Cassie Rodish. It should be an interesting matchup for sure, as Soukupova has faced a lot of tough fighters, with her losses coming to top competition, and Simpson has been able to rise to the occasion when necessary.

Last seen in Invicta FC in January, nabbing a Performance of the Night bonus, Mizuki Inoue has been winning the hearts and minds of fight fans the world over with her brilliant battles in both Invicta FC and in Japan’s Jewels promotion. This year alone, the fiery Inoue wrapped up a third-round armbar on Lacey Schuckman at Invicta FC 15 and then went back to her homeland to wrench a first-round armbar at Jewels 11. Inoue is a young talent on the rise and her next big test will be the gritty “Lights Out” Lynn Alvarez. With a 6-3 pro record dating back to a 2007 pro debut stoppage over Michelle Waterson, Alvarez has a lot of experience for only nine career fights. Also, all six of her wins are by finish, which means she will be ready to give as good as she gets in this high profile tilt against the 21-year-old Inoue.

Someone has to scrap with Aspen Ladd, right? At only 21 years old, the native of Folsom, California has three pro fights and finishes and they have all been for Invicta FC. The unassuming Ladd scored a first-round TKO in her debut, armbarred TUF 23 finalist Amanda Cooper in her second fight and, most recently, Ladd battered Kelly McGill en route to a TKO stoppage in March at Invicta FC 16. No doubt, Ladd will be the favorite, but Jessica “Bakan” Hoy comes from a great camp, has one finish to her name already, she will have a size advantage and she is looking to impress in Invicta. A product of Las Vegas’ Syndicate, Hoy will have a mountain to climb in besting Ladd, but this sport is built for upsets and Hoy trains with a litany of highly experienced fighters like Roxanne Modafferi, who will have Bakan ready for her big debut.

Kicking off the event, Sijara Eubanks will be making her return to Invicta FC as she meets Amberlynn Orr, who will be making both her pro and Invicta FC debut. Back in April 2015, “Sarj” scored a last second, first-round TKO of Gina Begley in what was Eubanks’ pro and Invicta FC debut. Eubanks took a loss in her next bout outside of Invicta FC, but is ready to build off what she started in the promotion. On the other side of this matchup, Orr sports an impressive 11-1 amateur record filled with first round finishes and, originally, was set to meet Kelly McGill in March. A lot to prove and a lot of glory is at stake for these up and coming bantamweights.