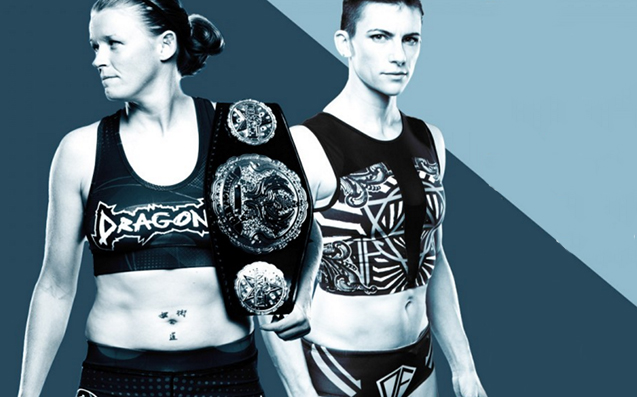 Gold is up for grabs in “The Golden State”.

It’s no secret that the women’s bantamweight and strawweight divisions are stacked. So stacked that the UFC has great fighters, great challengers, and truly great champions in both weight classes. And yet, the two baddest title owners at 135 pounds and 115 pounds may be the current Invicta FC champs - Tonya Evinger and Livia Renata Souza.

On May 7 at The Hangar at the OC Fair & Event Center in Costa Mesa, California, gold belts will be on the line in the main event and co-main event at Invicta FC 17, which airs live on UFC FIGHT PASS. The headliner, Invicta FC bantamweight champion “Triple Threat” Evinger will take on “The Thoroughbred,” Colleen Schneider. In the co-headline bout, Invicta FC strawweight champion “Livinha” Souza will square off with Angela “Overkill” Hill.

Here’s our preview of the nine scintillating fights at Invicta FC 17:

What’s there left to say about Tonya Evinger that Triple Threat hasn’t already said herself? The current Invicta FC bantamweight champion talks the talk and walks the walk, for sure. The one-time U.S. Olympic wrestling hopeful turned salty MMA veteran has been on one of the most fascinating career resurgences in Invicta FC. Evinger has won all five of her Invicta FC bouts, all against recognizable names, and she has looked better with every performance. In July, Evinger stomped young finisher Irene Aldana for four rounds to claim the title. In September, Evinger halted previously undefeated Pannie Kianzad in two rounds to win a non-title bout because Kianzad missed weight.

Tasked with trying to wrangle Evinger is Colleen Schneider. Currently enjoying a four-fight win streak, Schneider is a well-coached fighter with a deceptive amount of experience. With a background in taekwondo, Schneider has spent the past couple years training at Erik Paulson’s Combat Submission Wrestling gym in Fullerton, California. Before that, The Thoroughbred earned her MMA stripes spending almost as much time competing in Asia as she has in America. In January, Schneider took a decision win over the super tough Raquel Pa’aluhi at Invicta FC 15. No doubt, Evinger will be Schneider’s best foe to date, but it’s a great opportunity for a game fighter like Schneider, who has fought on big stages before. As for the champ, it’s another chance for Evinger to continue her streak of domination in Invicta FC.

Invicta FC strawweight champion Livia Renata Souza is a hurricane and Angela Hill is a cyborg bent on destruction. Even if it was just this fight, the card would be worth the ticket price. About a year ago, an undefeated Brazilian who had absolutely smashed her competition in her home country made her Invicta FC debut in a belt battle against then-champ Katja Kankaanpaa. It was a back and forth scrap, but Souza secured a triangle choke in the fourth round to claim the Invicta FC gold. At the time, Souza had won seven of her eight pro bouts by submission. In January, Livinha made her first title defense against undefeated DeAnna Bennett. It was over before it started as Souza stormed Bennett with strikes and scored her first career KO win just 90 seconds into the bout.

That same night in January at Invicta FC 15, The Ultimate Fighter 20 alum Hill made her promotion debut with a KO just 99 seconds into her bout with Alida Gray. Many believe Hill didn’t get a fair shake in the UFC, as she only had one pro fight before making her Octagon debut, which she did win against Emily Kagan at the TUF 20 Finale. From there, Hill took back-to-back losses against Rose Namajunas and Tecia Torres. The UFC’s loss was Invicta FC’s gain, as Hill has burst onto the scene in 2016 with two striking stoppages. Hill followed up on her short and impressive debut with a crushing second-round KO of the bigger Stephanie Eggink at Invicta FC 16. In just five months’ time, Hill has the chance to grab her third victory and claim her spot on top of the strawweight mountain. As for Souza, she has the opportunity to topple another tough challenger as she solidifies her championship legacy.

Originally, 21-year-old wunderkind Mizuki Inoue was to show off her Fight of the Night-winning skills in this bout, but Inoue had to withdraw earlier this week. Now this will be a dueling Invicta FC debut between two tough Brazilians with amazing nicknames as Kaline “The Dark Angel” Medeiros tangles with Aline “Hannibal” Serio. This will be a short notice bout for Medeiros, who has been training in the U.S. and is currently enjoying a three-fight win streak. Expectations for this matchup should be set to “slugfest,” as Serio is a scrapper who can end things early as all five her career KOs have occurred in the first round and she doesn’t shy away from a 15-minute brawl either. While this meeting came completely out of the blue, The Dark Angel versus Hannibal really has the potential to deliver Fight of the Night fireworks.

With Charmaine Tweet’s kickboxing background and Latoya Walker’s boxing background, this should be one wild slobberknocker on the feet. Of course, anything can happen in MMA. On one hand, “Not So Sweet” Tweet owns five first-round submission finishes and, on the other, “Black Mamba” owns two first-round knockouts, so one punch from Walker could be all she wrote. For Tweet, this fight is about regaining momentum after taking a first-round knockout loss to Cris Cyborg in February 2015. For Walker, this is about keeping momentum going with her undefeated pro record, which she improved to 5-0 with her most recent unanimous decision win over Peggy Morgan at Invicta FC 12. Either way, this featherweight division is growing and there’s a good chance the winner of this fight might fill the void, as Cyborg is set to make her Octagon debut next week at UFC 198. 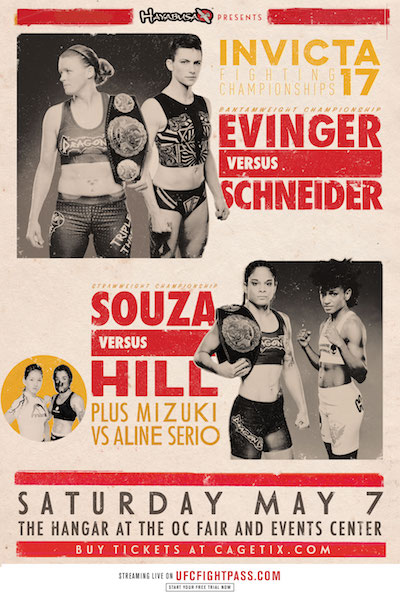 As mentioned, this 145-pound division is a growing one, and it has a bright future with finish-friendly fighters like Megan Anderson and Amanda Bell. Gold Coast, Australia’s Anderson is just non-stop action, and she nabbed her first promotional win with her most recent third-round TKO over Amber Leibrock, which also won the Fight of the Night bonus. Anderson’s 6-foot long frame has been in back-to-back rumbles in Invicta FC and this should be another can’t miss scrap as she meets Bell. Famously, Bell scored a 37-second knockout of Marina Shafir in August 2014, which propelled Bell into her Invicta FC debut a few months later, where she scored another first-round knockout. In her second Invicta FC outing, Bell would get the better of the first five minutes against submission ace Faith Van Duin, but would get quickly caught in a choke in the second round. Bell loves to throw heavy leather and Anderson is as aggressive as they come, so this is a must-watch featherweight fracas.

This is a classic “striker vs. grappler” matchup with a lot to prove for both fighters. The latter, Rachael Ostovich, became a quick fan-favorite with her Wonder Woman gear and her never-ending motor in her first two Invicta FC bouts. Ostovich split the difference in those outings, taking a split decision in the first and losing by armbar with only two seconds left to Andrea Lea in the second. Ostovich will aim to get back on the winning track against pro boxer turned pro MMA fighter Ariel Beck. Making her Invicta FC debut, Beck owns 3-1 pro boxing record and a 4-2 pro MMA record. Coincidentally, Beck has also tasted third-round armbar defeat at the hands of Lee. Obviously, Beck wants to make a solid first impression, and her two first-round knockout wins last year could be a sign of things to come in Invicta FC.

This flyweight bout has that irresistible force versus immovable object feeling. Just a cursory glance at her pro record will tell you that Christine “Knuckles” Stanley is not getting paid by the minute, as all four of her pro wins come by first-round knockout. Stanley’s most famous is her five-second hook kick knockout back in August 2014, but Knuckles’ most important thus far would be her drubbing of Laura Salazar in her Invicta FC debut in February 2015. Clearly, Stanley will throw for the KO early and often, but Shannon Sinn is tough and does not back down from anyone. She took a decision loss to Andre Lee in her first Invicta FC outing, but bounced back with a unanimous decision win in a heated contest against Maureen Riordon at Invicta FC 12. While she only has a 2-2 pro record, Sinn had a sizable amateur MMA career and she has not lost as a pro or amateur from strikes, so she knows how to survive and win firefights.

In their respective corners of the world, Laura Howarth and Alexa Conners have a dangerous reputation and it’s about time they share it with the rest of us. From East Sussex, England, “Hot Head” Howarth is a 2-1 pro with a stellar amateur career. Howarth will be making both her Invicta FC and US debut in this bout. As for Conners, this will be her Invicta FC and pro debut, but Conners was an amateur MMA star in her native South Carolina. With a 7-1 amateur record, including six KOs, Conners did hold a pair of amateur titles in her home state at featherweight and bantamweight. Kicking off Invicta FC 17 on UFC FIGHT PASS, both Howarth and Conners have the opportunity to represent where they come from with a big win.