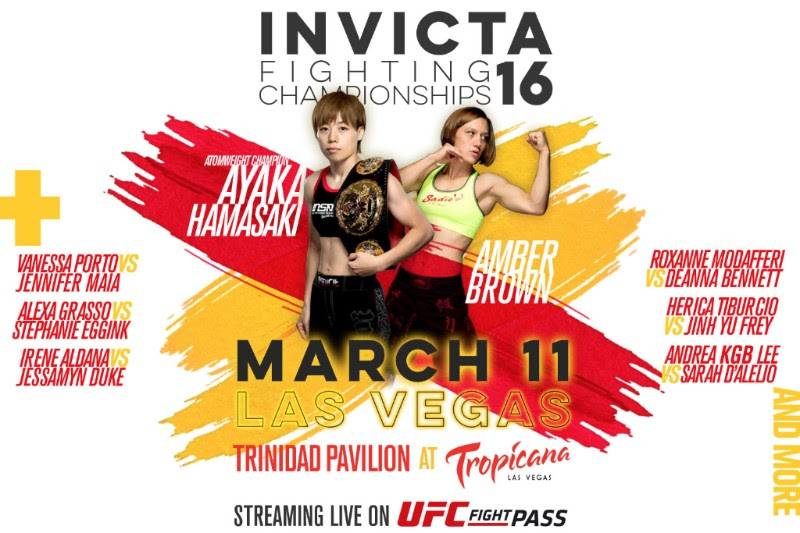 On March 11 at the Trinidad Pavilion at the Tropicana Las Vegas, the talented women of Invicta Fighting Championships will once again take over UFC FIGHT PASS to deliver an action-packed event that is headlined by two belt battles.

Not only are there a myriad of fan favorites tangling with title contention in the balance, but the Invicta FC atomweight and the interim flyweight championships will be up for grabs.

In the main event, newly crowned 105-pound queen Ayaka Hamasaki will defend her strap against rising star Amber “The Bully” Brown. And in the co-main event, top-ranked Brazilians will collide, as Jennifer Maia takes on Vanessa Porto for the interim title at 125 pounds.

Here’s a rundown of the stacked night of fights at Invicta FC 16: Hamasaki vs. Brown:

It’s the first on this list, but the best has, definitely, been saved for last on this fight card. This is what a main event should be - a title collision. Champion and challenger will not just exchange, they will plow right into the other. The current Invicta FC atomweight champion, Ayaka Hamasaki won the gold at the end of five rounds of crashing together like rams with then-champ Herica Tiburcio. With a stellar 12-1 pro record, Hamasaki has torn her competition asunder in her native Japan and has only surrendered defeat up a weight class against current UFC strawweight #1 contender Claudia Gadelha. Heading into her first title defense, Hamasaki will no doubt try to use her non-stop motor and takedowns to grind down her challenger.

But Amber “The Bully” Brown likes close quarters action. In the clinch, Brown likes to inflict as much damage as possible at all times by whatever means necessary. MMA fans know a thing or two about Albuquerque, New Mexico and that’s that champions are bred there, which is a tradition that Brown aims to extend. The 6-1 pro from Fit NHB has delivered three straight wins in Invicta FC including, back-to-back first round submission finishes. While only having a few years in this sport on paper, The Bully has gone well beyond fighting in local leagues and has fought twice in Japan.

It should be an excellent title fight, as Hamasaki is clearly Brown’s best opponent to date, but The Bully will have a size advantage and is effective at landing strikes in any position.

The one and only Invicta FC flyweight champion, Barb Honchak is enjoying a hiatus from fighting. Follow the two-time defending champ who is 5-0 in Invicta FC on social media to see all of Honchak’s lovely scenic photos of the Pacific Northwest. In the meantime, the 125-pound division has fights to be had and future opponents of Honchak to be forged, so an interim Invicta FC flyweight title will be battled over by two scrap-happy Brazilians.

Actually, it’s a rematch from about four and a half years ago. In the original meeting, submission specialist Vanessa Porto tapped striking stylist Jennifer Maia via armbar. At the time, Porto was 12-4 and had been competing for over six years. Meanwhile, Maia was 4-0-1 in only her second year in MMA since choosing it over boxing. It was an interesting matchup then and is an even better one now. Porto is riding a three-fight win streak, including two in Invicta FC since losing a decision to Honchak with the title on the line. As for Maia, she’s had a mix of wins and losses, but has shown excellent cardio and sharp technique against game opponents. One should easily expect these two to push the pace well into the championship rounds.

Originally, the undefeated Alexa Grasso was set to scrap in a possible “win and she’s in” title eliminator against one-time Invicta FC strawweight belt challenger Stephanie Eggink. The Mexican striking savant had to withdraw due to injury and has been replaced with another terror on the feet - Angela “Overkill” Hill. The Ultimate Fighter 20 alum had an impressive and impactful Invicta FC debut just two months ago with a knee to the body knockout of Alida Gray in under two minutes. Another win would leapfrog Overkill to the near top of the 115-pound ranks, but she’ll need to best a highly-underrated Eggink. It’s been a while since “Snowflake” fought, but Eggink’s one and only fight in Invicta FC was against Katja Kankaanpaa for the then-vacant Invicta FC strawweight strap. The Fight of the Night back in 2014 resulted in a fifth-round D’Arce choke win for Kankaanpaa, but it was a really one-sided drubbing by Eggink up until the surprising submission loss. Eggink has a deceptive amount of experience with only six pro fights, but she’s been a pro since 2011 and was a 3-1 amateur for a year prior to that. Certainly, Hill has the tools to take anyone out on the feet, but she is in for maybe her toughest fight yet by taking on the larger Eggink, who is going to be amped up to steal Overkill’s thunder.

This could be a barnburner or it could end in a flash, but this potential bantamweight brawl should be all sorts of exciting. After three years of fighting inside the Octagon, Jessamyn “The Gun” Duke is returning to where it all began for her in a high-profile clash with former title challenger Irene “Robles” Aldana. In her first go-around, The Gun earned two finishes in Invicta FC before getting bashed with an illegal knee that resulted in a no contest. The long and lean Ultimate Fighter 18 alum will try to right her career with a thrilling tangle with fast-finisher Aldana. The impressive product of Mexico’s Lobo gym has a 5-2 pro record, with all her wins coming via first-round stoppage, including two in Invicta FC. In her last outing, Aldana showed a lot of grit and heart as she was outclassed by current Invicta FC champ Tonya Evinger, but fought through that one-sided beatdown for 20 minutes. If this bout makes it past the first round, this has Fight of the Night written on it, as neither of these tall drinks of fisticuffs like to give their opponent an inch, whether they’re winning or losing.

This flyweight fracas is about momentum - continuing it or regaining it. Absolute fan favorite Roxanne Modafferi is in the middle of a career resurgence in this company and this weight class. “The Happy Warrior” has grabbed two decision wins, dropped a decision and, most recently, secured her first finish in Invicta FC with a third-round TKO of Mariana Morais in September. The veteran’s ground game has looked the best it has in years, and Modafferi will need it to be as she meets “The Argentine Assassin,” DeAnna Bennett. After going 8-0 as a pro, including four wins in Invicta FC, Bennett rode a wave of success that crashed hard on the rocks or knuckles of current Invicta FC strawweight champion Livia Renata Souza. Minus that 90 seconds of bad, Bennett has looked unflappable, earning win after win over game opponents like former champ Katja Kankaanpaa and Jennifer Maia. The Argentine Assassin is returning to flyweight to start a new streak as Modafferi aims to keep her star rising.

This collision at 105 pounds is frothing over with possible future belt associations. The former Invicta FC atomweight champ, Herica Tiburcio will make her first return to action since losing the belt by a narrow split decision in July. Seven months earlier, the Brazilian grappling machine earned that belt and two bonuses with her third-round guillotine choke of then champ Michelle Waterson. In her third Invicta FC bout, the 23-year-old will tangle with the lancing stand-up of Jinh Yu Frey. Owning a 4-1 pro record, Frey has scored three first-round finishes and went toe-to-toe in two hard fought decisions - a recent unanimous win over Liz McCarthy and a controversial split loss to Jodie Esquibel. With the division’s crown on the line in the main event, a win for either Tiburcio or Frey could mean a headlining belt bout in their next outing.

At some point, a young gun has to out-shoot an old rifle or a battled-tested warhorse has to run down a rankings-climbing colt. Mixing metaphors aside, 4-1 pro Andrea “KGB” Lee has brought an undeniable spark to the flyweight division with her scintillating striking and her submission-friendly ground game. Lee secured a last second armbar of Rachael Ostovich at Invicta FC 14 and, most recently, KGB grabbed another armbar win, this time for a belt in Legacy FC. That’s all well and good, but now, Lee will meet a returning “Monster” in Sarah D’Alelio. Making her first drop to 125 pounds within the promotion, D’Alelio has been a force to be reckoned with in Invicta FC, going 3-3 as a bantamweight. Throughout her six years as a pro, D’Alelio has faced a who’s who list of opponents and has had excellent wins within the promotion, like a unanimous decision win over Amanda Nunes and her ultra-slick armbar of Vanessa Porto. A win would catapult either fighter to the front of the flyweight division.

In November 2014, “Killer” Kelly McGill pounded her way to a bloody, unanimous decision win in her company debut as a featherweight at Invicta FC 9. While the victory over Maegan Goodwin was a good one, McGill was sidelined with an ACL tear for the entirety of 2015. Cut to a year and a few months later, abd the 2-0 pro who trains in Oakdale, California is returning to competition ten pounds leaner as a bantamweight against another 2-0 pro in Aspen Ladd. Taking this fight on short notice, the 21-year-old has already turned a lot of heads in Invicta FC competition with back-to-back finishes in the promotion. After scoring a first-round TKO in her Invicta FC and pro debut, Ladd secured a second-round armbar of the much-hyped Amanda Bobby Cooper in September. With both fighters known for their aggressiveness, it will be a struggle to see who can impose their will first.

Someone’s 0 has got to go, as these dueling debutants will begin their professional MMA careers on the big stage. Hailing from North Carolina and, nowadays, training in South Carolina, Ashley Greenway is no stranger to competition, as “Doll Face” has an extensive amateur MMA career dating back to 2011, with tangles against Invicta FC vets like J.J. Aldrich and Tecia Torres. The, literally and figuratively, colorful Greenway is set for a scuffle pitting “experience vs. offensive onslaught” against US Army veteran Sarah “Switch Kick” Click. The 24-year-old out of Cape Cod, Massachusetts has been turning heads on the amateur circuit, showing off some serious knockout power.