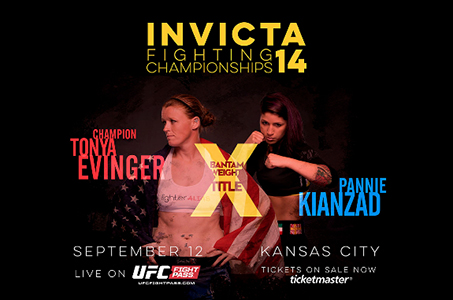 They’re baaack! Invicta Fighting Championships returns to Kansas City this Saturday for the all-female organization’s 14th event and its seventh live on UFC FIGHT PASS, and Invicta FC: Evinger vs. Kianzad has another stacked card, with action ranging from 105 to 155 pounds.

In that main event, undefeated Pannie Kianzad will aim to defeat Invicta FC champ Tonya Evinger, who has demolished all who have faced her thus far in the company, in a five-round bout now ruled a non-title affair after the challenger missed weight Friday afternoon. In the co-main event, former Invicta FC strawweight champ Katja Kankaanpaa looks to get back to her winning ways against the absolutely stellar DeAnna Bennett. Also ready to entertain are a litany of fan favorites and budding new stars that will clash in their journey to the top of the mountain.

Here’s a preview of who’s fighting who at Invicta FC 14:

In her first Invicta FC main event - although a non-title fight - gritty veteran Evinger is set to tangle with another young talent that is turning heads: Pannie “Sexy Scramble” Kianzad. With an unblemished 8-0 pro record, the 23-year-old Persian-Swede made her Invicta FC debut in July, taking a unanimous decision win over another highly touted debutant in Australia’s Jessica-Rose Clark. Since her successful entrance, Kianzad has gained a lot of popularity online with her vibrant personality and gifs of her executing the “butt bomb” against Clark.

Things will get a lot less fun and a lot more serious for “Sexy Scramble” at Invicta FC 14 as she takes on easily her toughest opponent to date in Evinger, who has been the resident meat grinder at 135 pounds.

It’s always about the title, and this co-main clash has those implications in spades. The former Invicta FC strawweight champ, Katja Kankaanpaa secured the strap with a come-from-behind fifth-round sub stoppage last year before losing the belt to current champ Livia Renata Souza back in April. The Finnish grappler affectionately known as “Killer Bunny” will meet the surging and undefeated “Argentine Assassin,” DeAnna Bennett. With three consecutive wins in Invicta FC, Bennett has only extended and doubled-down on her hype train as she made her Invicta FC debut already having wins over TUF 18 alum Colleen Schneider and TUF 18 winner Julianna Pena. It’s extremely possible that the next time you see the winner of this matchup - it will be in a five round fight.

It’s the old guard versus the new in this flyweight fracas. At 32 years old, “The Happy Warrior” Roxanne Modafferi is playing the wily, world-traveled veteran to 20-year-old Brazilian upstart Mariana Morais. For Modafferi, Invicta FC has been a burst of life to her career, as she’s earned impressive back-to-back wins over Tara LaRosa and Andrea Lea. The Happy Warrior did take a decision loss to Vanessa Porto in her last outing, but will aim to get back on track against 9-2 submission threat Morais. Riding a five-fight win streak into her Invicta FC debut, Morais has earned eight finishes, including six of the tapping variety. Morais could make huge noise with a big win over Modafferi or The Happy Warrior could silence critics by taking out a young contender.

Both flyweights have 2-1 pro records and star potential. Rachael Ostovich was already gaining fans by the minute before her Invicta FC debut with her choice of Wonder Woman attire for the weigh-ins and the fight itself. The 24-year-old went on to earn a decision win over Evva Johnson at Invicta FC 10 where Ostovich brought the fight to Johnson, scored takedowns and was in Johnson’s face for all 15 minutes. Meanwhile, striking specialist Andrea “KGB” Lee took a unanimous decision win in her Invicta FC entrance against Shannon Sinn, then lost a gritty back-and-forth battle with the vet Modafferi. On one side, Ostovich wants to continue her roll and, on the other, Lee wants redemption.

It’s an international extravaganza as Belgium’s “Battlecat” takes on Australia’s Anderson. In her first Invicta FC appearance, Cindy Dandois kind of had the cards stacked against her as she fought current champ Evinger at a lower weight than Dandois was used to and it was Battlecat’s first scrap in three-and-a-half years. Obviously, Dandois - who has been training a lot with current #1 ranked UFC women’s bantamweight Miesha Tate in Las Vegas - wants to put on a much better showing against the debuting Megan Anderson. Riding a four-fight win streak into her Invicta FC signing, Anderson is a true featherweight threat at six-feet tall and with back-to-back submission stoppages in her last two outings.

Jamie Moyle is already an Invicta FC success story. Originally, Moyle earned her spot on the Invicta FC roster by winning an amateur MMA tournament in her adopted home of Las Vegas. Since then, the Syndicate MMA product has gone 3-0 in Invicta FC, nabbing a Performance of the Night bonus in her debut, a rear naked choke in her next bout and a Fight of the Night bonus in her non-stop scrap with Amy Montenegro in July. Next up, Moyle will meet the surging Sharon “The Dream Catcher” Jacobson. Enjoying a three-fight win streak of her own, Jacobson took a unanimous decision win and a Fight of the Night bonus in her first Invicta FC bout against Delaney Owen in April. The Dream Catcher will be a dream “crusher” as Jacobson aims to derail Moyle’s hype train. Basically, two young bulls are locking horns and there’s bonus potential written all over it.

Besides being promising atomweights, Jinh Yu Frey and Liz McCarthy have two common pro opponents - plus a common amateur opponent - with similar results. Both lost razor-thin split decisions to the highly-touted Jodie Esquibel in Invicta FC and both grabbed wins over Cassie Robb. For McCarthy, “Lightning” wants to get her Invicta FC record back to .500 as she is coming off another tough split decision loss, this time to Amber Brown in McCarthy’s most recent outing. Meanwhile, Frey secured a first-round rear naked choke win over Robb in her most recent showing at Invicta FC 10. Making quick work of her opponents was the expectation for Frey, as her two fast finishes outside of Invicta FC were viral sensations.

After splitting the difference in her first two Invicta FC bouts, Colorado’s J.J. Aldrich is back and ready to rumble with New Mexico's exciting prospect Rosa Acevedo. The 23-year-old Aldrich earned a unanimous decision win over Delaney Owen in her Invicta FC and pro debut, but got tapped by Moyle in her second outing. The 1-1 pro record is deceiving, as Aldrich has a wealth of amateur experience, having fought Ostovich and Raquel Pennington and she owns a rear naked choke win over Kailin Curran. Making her Invicta FC debut on short notice by replacing Daniela Kortmann, Acevedo has enjoyed back-to-back wins with her most recent performance possibly her best to date: a second round armbar over Amanda Lovato in February. With a 3-1 pro record and an array of stoppages in her amateur career expect Aldrich to have her hands full with Acevedo.

California’s Aspen Ladd had about as great of an Invicta FC debut as she could have ever hoped for by scoring a first-round TKO via punches and elbows against Ana Carolina Vidal in February. The finish was not all too unexpected, as the 20-year-old Ladd was a terror in the amateur circuits, earning an 8-1 record with seven stoppages. Now, Ladd will tangle with another 1-0 pro as she meets the Invicta FC debutant Amanda Bobby Cooper. With a 2-1 pro boxing background and a litany of striking stoppages as an amateur MMA fighter, Cooper did the unthinkable and secured a second-round armbar to win her first pro MMA bout. With both fighters known for hunting for the finish early and often, this is a must-see matchup which is probably not going the distance.

Someone’s 0 has got to go as two amateur standouts turn pro in Invicta FC. The partisan Kansas City crowd will no doubt be cheering for local Topeka native Rachel Wiley. The Midwest Combat Academy-trained Wiley has a 5-1 amateur record, including three finishes and some amateur kickboxing experience to boot. Standing in Wiley’s way is Florida’s Felicia “Fee-nom” Spencer, who also owns a 5-1 amateur record. Like former Jungle MMA teammate Jamie Moyle, Spencer actually won her Invicta FC contract by taking top honors in Tuff-N-Uff’s “Future Stars of MMA” tournament with back-to-back finishes. They can’t ask for anything more than to get their pro debuts in Invicta FC and live on UFC FIGHT PASS.