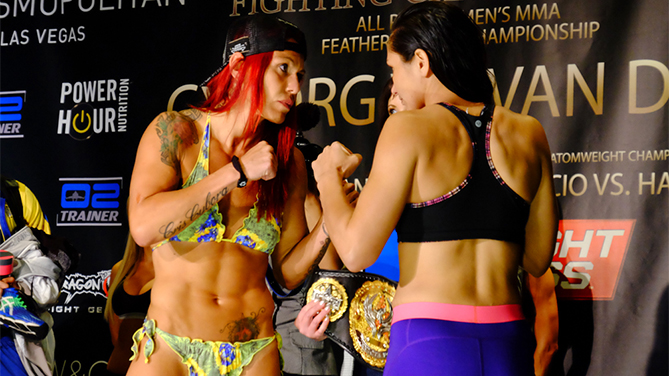 Three title fights on a Thursday???

Without a doubt, the luckiest people in Las Vegas this week will be those in attendance for Invicta FC 13’s outrageous card featuring three belts up for grabs. Unless you have a seat in the Cosmopolitan Hotel in “Sin City,” then Thursday night’s glittery gold-filled action is on UFC FIGHT PASS.

Headlining this event is the one and only Invicta FC featherweight champion Cristiane “Cyborg” Justino, who is making her second title defense against “The Immortal” Faith Van Duin. The vacant Invicta FC bantamweight strap will get a new owner as Mexico’s quick finisher Irene Aldana takes on the resurging Tonya “Triple Threat” Evinger. Lastly, the shining star of Invicta FC 10, Herica Tiburcio, will aim to successfully defend the Invicta FC atomweight belt for the first time against Japanese MMA superstar Ayaka Hamasaki.

Can anyone stop Cyborg? So far, Justino has gone 3-0 in Invicta FC, scoring three TKOs, with two of those occurring in the opening round and a shiny belt stating Cyborg is the baddest woman at 145 pounds. After sitting out of MMA for a year and a half, Justino returned in February to deliver a 46-second beat down of Charmaine Tweet at Invicta FC 11 for Cyborg’s first title defense. Now, the submission savvy Faith Van Duin will have the unenviable task of battling with Justino for the Invicta FC featherweight belt. In her April promotional debut, the New Zealander known as The Immortal secured a Performance of the Night bonus for her second round rear naked choke of Amanda Bell. With her 5-1 pro record, Van Duin will have her hands full - understatement of the year - trying to do what has not been done in over a decade: defeat Cyborg.

In December 2013, Lauren Murphy became the inaugural Invicta FC bantamweight champ with her come-from-behind TKO over Miriam Nakamoto, but before Murphy could defend the belt, she was signed by the UFC. Vying for the vacant title is a youthful explosion and a veteran warrior who are both undefeated thus far in Invicta FC. With a 5-1 pro record, Irene Aldana has burst onto the Invicta FC scene with two crazy quick sub stoppages. “Robles” trains out of Lobo Gym in Guadalajara alongside Alexa Grasso, who may be contending for the Invicta FC strawweight title later this year. Standing in Aldana’s way is women’s MMA pioneer Tonya Evinger, who has been fighting professionally since 2006 and, currently, is on a six-fight win streak. After almost a decade in this sport, “Triple Threat” has earned three dominant wins in Invicta FC, including two submissions, and appears to be more dangerous now than ever before. It’s about time someone starts wearing this belt again and both these women would make for a great champion.

It’s been eight months and people are just starting to pick their jaws up off the floor from Herica Tiburcio’s promotional debut, where the 22-year-old Brazilian earned a Performance of the Night bonus, Fight of the Night bonus, and the Invicta FC atomweight belt by submitting then-champ Michelle Waterson a minute into the third round. The much-heralded win by Tiburcio will be tough to top, but the 4’11” submission magician will try her best as she collides with judo black belt Ayaka Hamasaki. Trained by Japan’s greatest female MMA star Megumi Fujii, Hamasaki owns an impressive 11-1 pro record, including an armbar over Lacey Schuckman in her Invicta FC debut. Expect a grappling duel with both champion and challenger looking to impose their will on the ground.

As the bantamweight belt is decided on this card, two rising stars and brand new Invicta FC signings will battle to be one step closer to getting first crack at the title. Born in Iran, raised in Sweden and trained in Denmark, Pannie “Banzai” Kianzad is a shock of personality and butt-kicking talent with a perfect 7-0 pro record. The 23-year-old has been tearing up the European women’s MMA scene since her pro debut in 2012 and, most recently, took a five-round unanimous decision to claim an inaugural women’s bantamweight title in London. Set to derail Banzai’s party bus is Jessica-Rose Clark and her 5-1 pro record. The fourth Australian to be signed to Invicta FC, “Jessy Jess” is riding a three-fight win streak, including two finishes, and, like Kianzad, Clark is coming off a five-round unanimous decision win that earned her a women’s bantamweight belt in her home country. Both of these women are primed for the big time, but they’ll need to clash with each other first.

In her first Invicta FC outing, Amber Brown fought tooth and nail with Liz McCarthy, earning “The Bully” a split-decision win and improving her pro record to 4-1. Hailing from a fighter’s town, Albuquerque, Brown laced up her first pair of gloves at Fit NHB to get back into shape after having a baby. Six years later, The Bully is trying to make a name for herself in the 105-pound division and Brown will do just that if she can best the undefeated Catherine “The Alpha Female” Costigan. Not just the homeland of Conor McGregor, Ireland has produced Costigan, who has an unblemished 5-0 pro record with four wins by submission, and her sights are firmly set on a shot at Invicta FC gold. On paper, this is a classic “striker vs. grappler” matchup with a lot hanging in the balance for the winner.

Already a success story, Jamie Moyle won the Tuff-N-Uff 115-pound amateur tournament last year that featured such prizes as a shiny belt and an Invicta FC pro debut. In November, Moyle earned a unanimous decision win over Jenny Liou Shriver in her Invicta FC debut. The Syndicate MMA product then steamrolled over J.J. Aldrich en route to a first-round rear naked choke victory in February. Now, Moyle is 2-0 and ready to take a step up in competition against Amy “The Resurrection” Montenegro. Owning a 6-1 pro record, including three sub stoppages, Montenegro took home a hard-fought unanimous decision win over American Kickboxing Academy’s Brianna van Buren in her Invicta FC debut in February. Considering each of these women has been in a war in Invicta FC in a previous bout, this should be a gritty grind with sleeper-pick potential for Fight of the Night.

Not many “curtain jerkers” have this much hype around them, but not many of them are good friends with and a training partner of UFC bantamweight champ Ronda Rousey. In her highly anticipated Invicta FC debut, “The Supernova from Moldova,” Marina Shafir, will tangle with fellow debutant and BJJ ace Amber “Jacare” Leibrock. As a member of Rousey’s “Four Horsewomen,” Shafir had an impressive unbeaten amateur career before turning pro and going 1-1 in two lightning-quick outings. Meanwhile, this will be the Charles Gracie Jiu-Jitsu product Leibrock’s pro debut after splitting the difference in her two amateur MMA bouts. Expect a submission-friendly tussle as all of Shafir and Leibrock’s MMA wins are of the tapping variety.