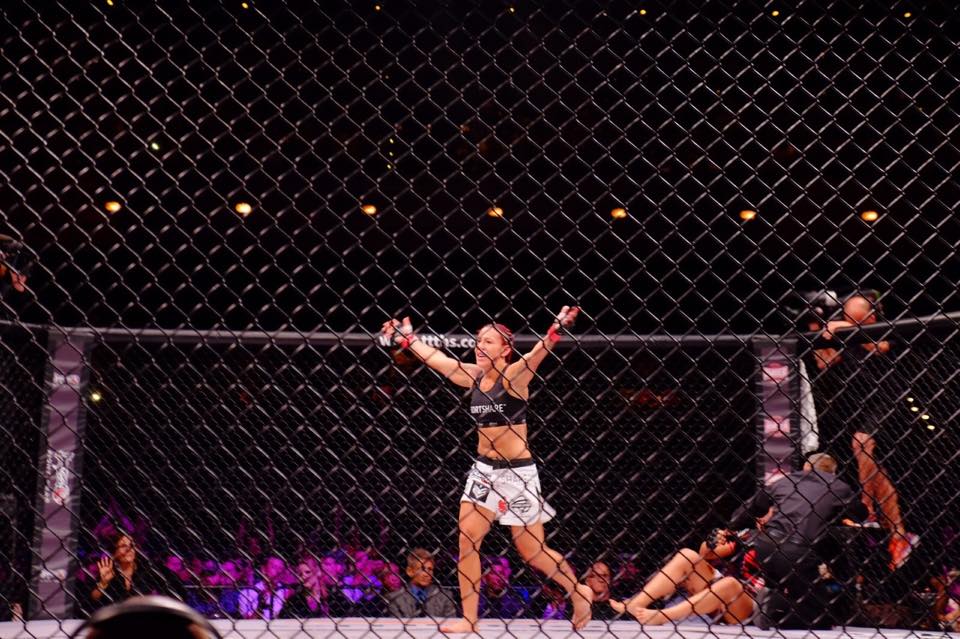 Another fight, another foe turned away with the quickness by Cris Cyborg.

Just 45 seconds into the opening round, referee Steve Mazzagatti was stepping in to wave Thursday night’s Invicta FC 13 main event fight off. The first clean right hand that the Brazilian champion landed caused Faith Van Duin to take two big steps backwards, prompting Cyborg to chase her down and unload a collection of heavy shots along the cage that signaled the beginning of the end.

When Van Duin dropped to the floor, two more shots brought the fight to a close, giving Cyborg her fourth consecutive victory under the Invicta FC banner and her second consecutive successful title defense that ended in under a minute.

In the wake of another dominant outing, the question remains the same: what’s next for the dominant featherweight titleholder?

Cyborg has crushed the competition and appears to be without an equal, leading to the continued speculation about a potential showdown with UFC women’s bantamweight champion Ronda Rousey.

After her victory, Cyborg once again implored the unbeaten Olympian to “stop running” and meet her in the cage, but Rousey has remained steadfast in her stance that it’s the Brazilian that has to come to her, challenging Cyborg to make the 135-pound limit so the dream fight can become a reality.

The opening round of the bantamweight title fight between Tonya Evinger and Irene Aldana was a wild affair that showcased Evinger’s aggressive style and the tremendous heart and guts of her Mexican opponent.

“Triple Threat” came out quick and put Aldana in a series of bad positions, threatening with a toe hold early, strikes in between and a deep armbar that looked like it was going to bring the fight to a close. Somehow, Aldana escaped, but Evinger wasn’t deterred, continuing to attack with strikes and submission attempts through to the bell.

While the pace slowed considerably in the second, it was more of Evinger being the hammer and Aldana being the nail as the 34-year-old veteran worked from inside her 27-year-old opponent’s guard, softening Aldana up with strikes and keeping her back against the fence or on the canvas for the majority of the round.

Just when Aldana appeared to be turning the tables, fending off takedown attempts and making Evinger work hard for everything she got, the Houston native completed another takedown and moved straight into mount, spending the final 90 seconds of the middle round looking for limbs and landing hammerfists.

Entering the championship rounds, Evinger’s torrid pace was clearly starting to take its toll, but her veteran savvy allowed her to continue dominating the action. When Aldana tried to stuff a takedown by pushing away Evinger’s head, the 20-fight veteran deftly took her back, eventually making her way to mount yet again.

As the punches rained down, referee Mark Smith warned Aldana to fight back and when she couldn’t escape, he stepped in to wave off the action, giving Evinger her fourth straight Invicta FC win and making her the promotion’s new bantamweight champion.

Hamasaki controls Tiburcio on the mat to claim atomweight strap

In the opening round, the Japanese veteran Ayaka Hamasaki kept champion Herica Tiburcio on the end of her strikes, popping Tiburcio with clean lefts as the diminutive Brazilian titleholder tried to close the distance. Late in the frame, Tiburcio stung Hamasaki, creating an opportunity to dive on a guillotine choke, but the patient challenger escaped the hold without much trouble.

The second was a grappling-heavy frame, with Hamasaki controlling the majority of the action from half guard, dragging Tiburcio back to the mat every time referee Kim Winslow brought the fighters back to their feet, even though the challenger would be working to advance and find openings against the champion.

Round 3 looked like it was going to be more of the same from the second, with Hamasaki initiating the takedown early and controlling Tiburcio on the ground, but midway through the frame, the champ was able to reverse position along the fence and take Hamasaki’s back, spending the rest of the frame threatening chokes and forcing the 11-1 veteran to play defense.

Hitting the championship rounds, Hamasaki went back to work from top position in the fourth and despite Winslow impacting the action with an ill-timed, unnecessary stand-up, the former Jewels titleholder returned Tiburcio to the mat with a heavy trip takedown in the center of the cage and remaining there for the rest of the round.

As soon as the final round began, Hamasaki put Tiburcio on the canvas and began attacking an arm. The resilient 22-year-old defended, but struggled to shake her more seasoned foe. Once they did return to the feet, Tiburcio failed to muster the kind of “need to finish” offensive required to sway the fight in her favor. With a minute left in the fight, Hamasaki once again put Tiburcio on the mat, riding out the final seconds on top to secure the victory and claim the Invicta FC atomweight title.

A pair of newcomers clashed in the final non-title fight of the night with Sweden’s Kianzad squaring off with Clark, a 27-year-old Australian carrying a three-fight winning streak into Thursday’s clash.

After spending the majority of the first round battling on the feet, both at range and on the fence, Kianzad scored a late takedown that seemed to inform her approach in the second. Softening Clark up with a series of left hooks, “Banzai” once again dragged the fight to the floor, controlling the majority of the action and threatening with a couple different submission attempts while shutting down Clark’s every attempt to get back to her feet.

The third returned to the striking realm, with Kianzad showing off her crisp, varied boxing, including a stiff jab and slick, short left hook that she connected with early and often to the body and the head. Clark remained game, trying to hunt down Kianzad in the final seconds, but it was too little, too late.

Kianzad took home a clean sweep of the scorecards to push her record to 8-0 and establish herself as a contender in the Invicta FC strawweight division.

The first of several Irish fighters to hit the cage this weekend in Las Vegas, Costigan carried plenty of hype into her promotional debut against Brown, the Albuquerque product who picked up a split decision win over Liz McCarthy in her Invicta FC debut last November.

From the outset, Brown completely dominated, pressing forward at the start of the round, taking Costigan to the ground with an outside trip from a body lock and landing in mount. From there, Brown stayed busy, landing measured, short elbow strikes and hunting for submissions.

The Irish newcomer defended well initially, but as Brown continued to drop elbows, Costigan gave up her back and the Fit NHB product flattened her out and sunk in the rear naked choke to get the tap at 3:34 of the first round.

During her post-fight interview with Laura Sanko, “The Bully” said she’s no more than one fight away from a title shot and after that kind of performance, it’s hard to argue with her.

Montenegro and Moyle both picked up victories at Invicta FC 11 back in February – the former scoring a unanimous decision win over Brianna Van Buren, the latter tapping out J.J. Aldrich in the first round – and squared off here in a battle of two emerging talents looking to climb the strawweight ladder.

These two went full throttle from Jump Street, with the opening five minutes playing out like a Rock’em Sock’em Robots fight, both women stinging the other with stiff shots. When Moyle threatened from bottom with an armbar, Montenegro slammed her to the canvas, breaking the hold.

While the pace slowed a little in the middle frame, it remained a close, gritty, back-and-forth affair. In the third, neither fighter gave an inch, trading strikes in the pocket and grinding it out along the fence, battling for head position and exchanging knees.

When the cards were read, it was Moyle coming away with the split decision victory to maintain her unbeaten record and extend her Invicta FC winning streak to three. The 26-year-old Syndicate MMA product remains one to watch in the 115-pound ranks going forward.

This battle of promotional newcomers was a tremendous kick-off to Invicta FC 13.

Shafir, a member of The Four Horsewomen alongside UFC women’s bantamweight champ Ronda Rousey, Shayna Baszler and Jessamyn Duke, entered off the first loss of her career – a stunning first-round knockout loss to Amber Bell – while the 27-year-old Leibrock earned her way into Invicta FC for her professional debut by winning the Tuff-N-Uff Future Stars of MMA tournament back in January.

It didn’t take long for Leibrock to make a statement, pressing the action right out of the gate and stinging Shafir with a right hand in the center of the cage. With Shafir on the ground trying to recover and searching for a leglock, Leibrock unleashed a torrent of right hands that put her out, bringing an end to the fight in just 37 seconds.

This was an outstanding promotional and professional debut for the 27-year-old Californian, who said she asked to face Shafir with designs on proving she’s the best in the 145-pound weight class. This wasn’t a bad start for her in that regard.