This Friday, for the fifth time, Invicta Fighting Championships will be live on UFC FIGHT PASS. 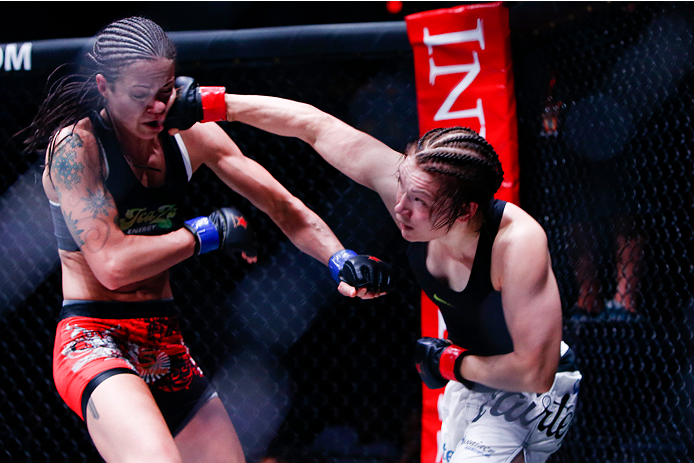 On Friday night, April 24th, Invicta FC is returning to Kansas City, Missouri with an exciting card and a glittery gold belt up for grabs.

In the main event, Invicta FC strawweight champion Katja Kankaanpaa will make her first title defense as she faces off with undefeated submission magician Livia Renata Souza. Also in action in the co-main, The Ultimate Fighter 18 alum Roxanne Modafferi will aim to remain perfect in Invicta FC as she tangles with the owner of, arguably, the stiffest jab in the flyweight division, Vanessa Porto.

Here’s a rundown of Invicta FC 12: Kankaanpaa vs. Souza’s matchups:

It was easily one of the most dramatic wins in Invicta FC history. Katja Kankaanpaa slapped on a D’Arce choke in the fifth round of a title fight where she was down on the scorecards. About seven months ago in the co-main of Invicta FC 8, Finland’s finest, aka “Killer Bunny,” fought tooth and nail with Stephanie Eggink for the vacant strawweight belt for four rounds with Kankaanpaa most likely, down three rounds to one. As mentioned, Killer Bunny sealed the Fight of the Night with a slick sub about halfway through the final stanza.

In her first title defense, the 10-1-1 pro will take on the 7-0 challenger - Livia Renata Souza. Owning six of her career wins by the tapping variety, Brazil’s “Livinha” is a black belt in both judo and Brazilian jiu-jitsu. Souza’s Invicta FC debut will be right at the top of the mountain in a scheduled 25-minute title bout, but with five of her subs taking place in the first round and three of those happening in under a minute each, it may take longer for Livinha to walk out to the fight then it will for her to walk out with the belt.

Hot on the heels of two terrific Invicta FC wins last year, fan favorite Roxanne Modafferi will face, seemingly, her toughest test yet in the flyweight division in Vanessa Porto. Following a stint on TUF 18 at 135 pounds, “The Happy Warrior” dropped to 125 and has picked up back-to-back, hard-fought decision wins over veteran Tara LaRosa and young, striking specialist Andrea Lee. Meanwhile, Brazil’s 17-6 pro earned a second Invicta FC win as Porto took a unanimous decision over striker Zoila Frausto Gurgel. No doubt, Porto has her eyes set on a rematch with Invicta FC flyweight champion Barb Honchak, and for that to happen Porto needs to get through Modafferi first.

Better late than never as Faith Van Duin will finally make her Invicta FC debut. Originally, New Zealand’s 4-1 pro was set to take on Charmaine Tweet last December, but instead of scrapping the fight was scrapped because Tweet was not cleared to fight at the last minute. Smash cut to this week and “The Immortal,” who owns three of her four pro wins by stoppage, will meet head-to-head with “The Lady Killer,” Amanda Bell. Coming off a very strong showing in her last outing, Bell scored a first round knockout of Denmark’s Maria Hougaard Djursaa, which was the only finish recorded at Invicta FC 9. Bell had a rocky start into pro MMA, losing her first two bouts, but The Lady Killer has turned that frown upside down with three straight finishes, including the KO of newly signed Invicta FC prospect Marina Shafir last August, which went viral in the MMA blogosphere.

Ediane Gomes has picked herself up, dusted herself off and come back stronger before and the long-tenured American Top Team member will aim to do the same against Raquel Pa’aluhi. In her last Invicta FC outing, Gomes got tapped by the resurgent Tonya Evinger, which was Gomes’ first Invicta FC bout at bantamweight. Prior to that, Gomes had earned two impressive wins at featherweight and will look to bring her usual strong ground game against Hawaii’s Pa’aluhi. Taking a fight on short notice is always about seizing an opportunity via upset, which Pa’aluhi did as she earned a unanimous decision win over veteran striker Kaitin Young at Invicta FC 9. Like Gomes, all of Pa’aluhi’s previous pro losses are against top-flight competition, but with a win over Gomes, Pa’aluhi could pull her career over .500 in a big main card spot.

Slugfest! While anything can happen in MMA, there’s a solid shot at this being a striker’s duel between the long limbs of Peggy “The Daywalker” Morgan and the raw power of Latoya “Black Mamba” Walker. The 6’1”, TUF 18 alum has split the difference thus far in Invicta FC competition, with Morgan snagging a unanimous decision win over Andria Wawro in her last outing. Standing across from The Daywalker will be Invicta FC first-timer Walker, who boasts an undefeated pro MMA record. At 4-0 with two wins by KO, Black Mamba may be new to Invicta FC fans, but Walker is far from new to combat sports, with her background as an undefeated amateur pro boxer including a Golden Gloves tournament. Expect Morgan and Walker to lace them up to knock each other down.

This has a battle to the final bell written all over it. Making her promotional return, Lacey “The Ladie” Schuckman was last seen in Invicta FC 3’s slobberknocker against former atomweight champ Michelle Waterson. Schuckman lost by split decision, but won a much-deserved Fight of the Night bonus. With a well-traveled 10-8 pro record, Schuckman will bump up 10 pounds to strawweight to collide with 3-1 pro Jenny Liou. A college professor and BJJ lifer, Liou will look to nab her first Invicta FC win in her second try. While her background is in grappling, Liou is a scrapper and doesn’t give an inch whether she’s winning or losing, and she hasn’t been stopped as a pro or amateur. This matchup may not have a belt on the line, but it’s certainly got more than its fair share of bonus earning potential.

Outside of Invicta FC, Delaney Owen is 3-0 with all of those pro wins by submission. Inside Invicta FC, “Lil Scrappy” is 0-1 with a hard fought loss to J.J. Aldrich in their organizational double debut. For the Florida born and trained Owen, maybe the second chance is the charm as Lil Scrappy will lock horns with promotion debutant Sharon Jacobson. Sporting a 2-1 pro record, Jacobson owns both of her wins by first round KO - one by slam - and her lone loss was against undefeated Invicta FC wunderkind DeAnna Bennett. On paper, Owen will look to grapple and Jacobson will look to clobber.

It’s a classic “grudge match” as former training partners turn foes. Colorado native’s Shannon Sinn and Maureen Riordon have a bit of a personal rivalry hanging over this scrap besides both searching for their first Invicta FC wins. After a successful amateur career, Sinn turned pro with a sub one-minute sub win before making her Invicta FC debut in a tough decision loss to Andrea Lee. As a BJJ purple belt under Master Sylvio Behring, Sinn will most likely try to take this fight to the floor against Riordon, who owns three of her amateur wins by KO and who’s one and only pro fight was a loss via armbar. But that loss is more than meets the eye, as Riordon was fighting up a weight class against the UFC’s Marion Reneau, who has diced through two women thus far inside the Octagon. Expect “Baby Face” Riordon to come out guns blazing against a familiar target in her Invicta FC debut.

Someone’s 0 has got to go as both Gina Begley and Sijara Eubanks will be making their Invicta FC and pro debuts in this flyweight fracas. The former’s nickname “Jellybean” sounds like a joke, but her three amateur wins - including one over Sinn - via chokes are no laughing matter. The Kentucky native will need those ground skills to be in top form as she will clash with BJJ black belt Eubanks. With two tapping wins as an amateur, Eubanks has been a fixture on the medal stand at International Brazilian Jiu Jitsu Federation tournaments the world over. For grappling lovers, make sure to tune into UFC Fight Pass early for JellyBean versus Eubanks.