Saturday night at STAPLES Center, the Octagon’s main and co-main event are set in the women’s bantamweight division as Cat Zingano challenges UFC women’s bantamweight champion Ronda Rousey and Raquel Pennington takes on Holly Holm. But that is far from the only female fighting action in store this weekend.

There are no two words said in succession sweeter to a combat sports fan than “title fight”. Set to make her first belt defense, Invicta FC featherweight champion Cristiane “Cyborg” Justino is returning to MMA action for the first time in almost two years to tangle with Canadian kickboxer Charmaine Tweet. At Invicta FC 6, Justino delivered a classic Cyborg performance by brawling and beating former Strikeforce women’s bantamweight champion Marloes Coenen for four rounds before finishing her by TKO to grab that gold. And it’s just great having the champ back because she always provides that must-see excitement.

As for the challenger, a former Muay Thai kickboxing champion and mother of two, Tweet scored a first round stoppage due to strikes against Veronica Rothehausler in September to earn this title shot. While Cyborg has more or less steamrolled her last 13 opponents, Tweet poses two serious challenges, which most of those foes could not and they could give Justino fits. The first, Tweet is six feet tall, giving her a clear size advantage over Justino, who usually likes to bully her opponents. The second, Tweet’s striking background, coupled with her height and length, could easily make this Cyborg’s most difficult fight to date, if not her first loss in just shy of a decade. 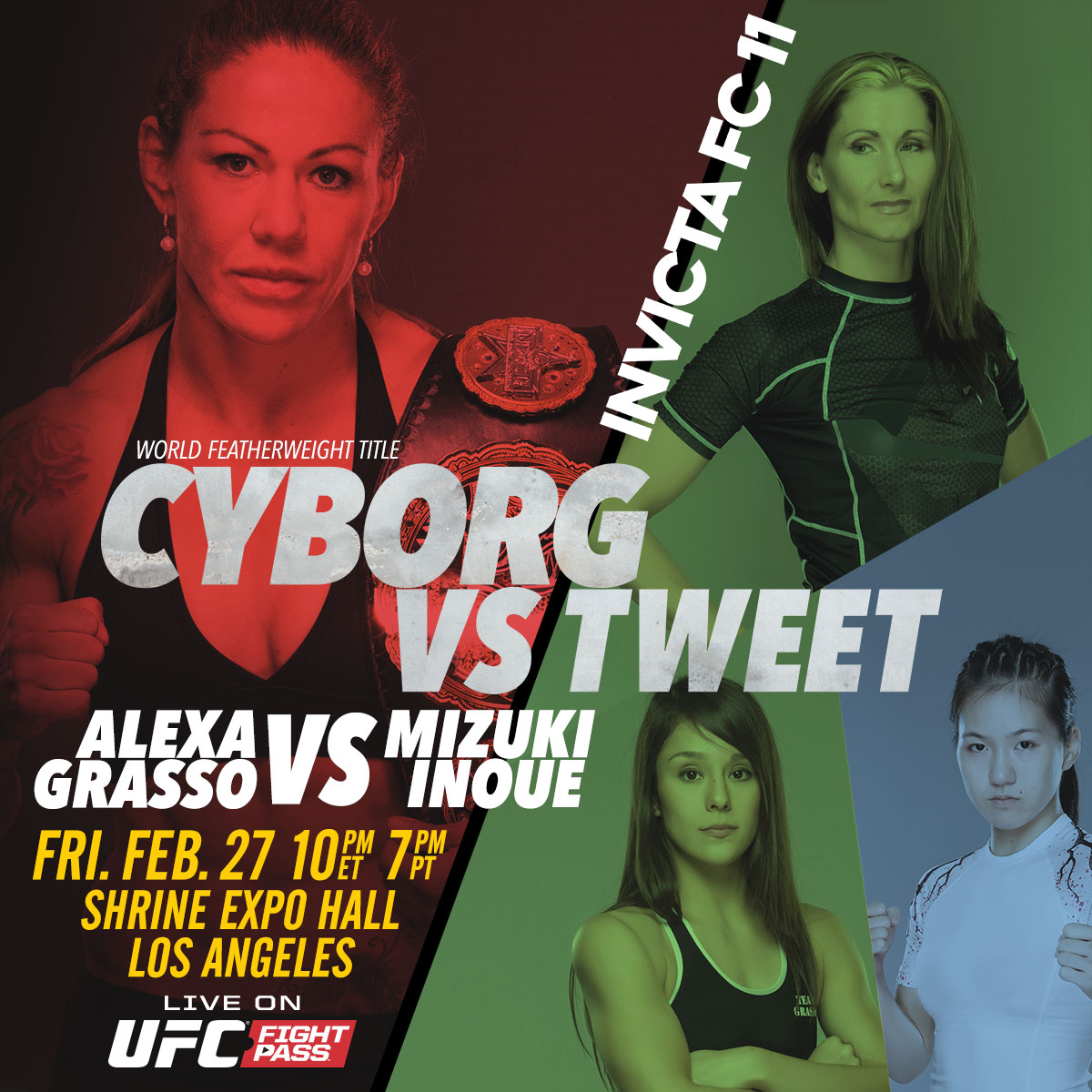 Can you say ‘Fight of the Night’? Without a doubt, Mizuki Inoue is Japan’s best female strawweight, with a 7-1, 1NC pro record in her home country, all but one of those wins coming via armbar. In Invicta FC, Inoue has shown off some of the slickest boxing and a never-ending gas tank in her Fight of the Night with Karolina Kowalkiewicz and her unanimous decision win over The Ultimate Fighter 20’s Bec Rawlings. Ready to meet Inoue head on is Mexico’s undefeated knockout artist Alexa Grasso. The Team Lobo punching prodigy owns four of her six wins by first-round KO, including her most recent striking stoppage over Alida Gray at Invicta FC 10. No matter who comes out on top, the sky's the limit for these two, with Grasso at 24 years old and Inoue at only 20 years old.

Last year was a huge one for DeAnna Bennett as “The Argentine Assassin” earned four wins, three by stoppage and two were in Invicta FC. Improving her perfect pro record to 6-0, Bennett was a standout star in 2014, making her Invicta FC debut with a second-round body kick TKO and following that up with a unanimous decision win over the highly-regarded Jennifer Maia. Originally, Bennett was set to scrap with Lynn Alvarez, but an injury forced her from the card and Norma Rueda Center is stepping up on just over two weeks’ notice. The 3-1 product from Team Jackson-Winkeljohn is a game competitor, having only suffered a single defeat as a pro or amateur, which was in a decision to TUF 20’s Joanne Calderwood on short notice. It’s a huge opportunity for Center to take out an undefeated rising prospect, while it’s up to The Argentine Assassin to keep her loss column clean as she angles toward a title shot.

Another ultra-exciting Team Lobo fighter, Irene “Robles” Aldana, owns a 4-1 pro record with all four of her victories via first-round stoppage. In September, Aldana made her Invicta FC debut in a short, but sweet, tangle with TUF 18’s Peggy Morgan, where Aldana secured a rear naked choke just shy of three minutes into the bout. Aldana was supposed to clash with Melanie LaCroix, but an injury forced her to withdraw and, now, the “Thoroughbred” Colleen Schneider is taking this bout on short notice. Coming off a five-round unanimous decision win in October, Schneider is eager to make her Invicta FC debut and show off her Erik Paulson catch wrestling style.

Someone’s 0 has got to go! Both J.J. Aldrich and Jamie Moyle made successful pro MMA debuts in their Invicta FC debuts in unanimous decision wins last year. The latter, who trains out of Syndicate MMA, claimed her Invicta FC spot by winning an amateur tournament in Las Vegas. The former had a lengthy amateur career featuring clashes with current UFC fighters like Raquel Pennington and Kailin Curran. It should make for an exciting fight as both are young, hungry and ready to prove they belong in Invicta FC.

It’s an Invicta FC double debut as Brianna “The Bull” Van Buren collides with Amy “The Resurrection” Montenegro. Despite being only 4’11”, The Bull packs as a serious punch, with two of her three pro wins by first round KO. The American Kickboxing Academy product will put her 3-1 pro record on the line against the 5-1 pro record of The Resurrection. With four of her five pro wins by finish, including three rear naked choke victories, Montenegro is a clear threat no matter where the fight goes.

This is a classic “striker vs. grappler” matchup with one major twist as these two really get after it. In the long-standing tradition of “don’t blink!” clashes, knockout artist Christine Stanley is set to scrap in an Invicta FC double debut with submission magician Rachael “The Panther” Cummins. A member of Liz Carmouche’s Team Hurricane Awesome, Stanley owns a 3-1 pro record with all three wins coming by KO in a grand combined time of 92 seconds. In August, Stanley scored easily one of the most impressive highlight reel KOs of last year with a five-second, flying, spinning, hook kick. Looking to take the fight to the ground is Reign MMA’s Cummins, who owns all of her pro and amateur wins by tap out, with almost all of them occurring in the first round. Stanley’s lone loss did come by an armbar submission, so watch for The Panther to pounce on that.

Kicking off the card are two flyweights making their pro debuts on the Invicta FC stage. Ana Carolina Vidal is a highly-decorated BJJ competitor out of Gracie South Bay Jiu-Jitsu, who won her first amateur MMA bout at the tail end of 2014 by way of submission in under two minutes. Originally, Aspen Ladd was set to take on the 2-0 Kristi Lopez. While this is her pro debut and she’s only 19 years old, Ladd already has a ton of amateur experience and has won amateur titles in several organizations in Nevada and California.