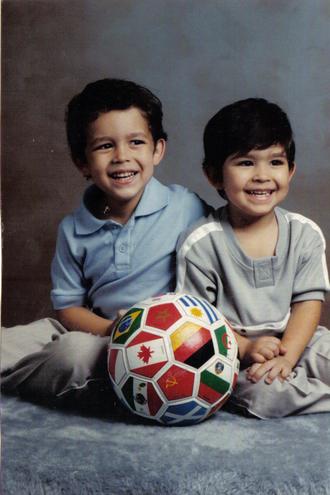 Many would be happy to reach the UFC and get a chance to fight the best MMA athletes in the world, but that’s not enough for Ulysses Gomez. He’s here to win.

Positioned at number 10 at flyweight in the current UFC rankings, Gomez is already in England for what will be his second fight in the Octagon at UFC on FUEL TV 7 this Saturday, a bout against veteran Phil Harris. His first UFC bout was a bitter one, as he debuted with less than two weeks notice at UFC on FOX 4 last August, and was defeated by the man who now has the opportunity to compete for the title held by 125-pound champion Demetrious Johnson: John Moraga.

Although born in Los Angeles, Ulysses lives the story of many Mexican immigrants, who, like their parents, are also fighters. Even as a child, he was fighting with his brother Herculez, striker for the U.S. National Soccer Team and Club Santos in Torreon, Mexico.

"Ulysses was calm and respectful, but we fought like brothers. We were competing but always together; I never thought he would be a fighter though, until he was 17 or 18. I saw in him the passion for MMA," says Herculez, remembering those typical brotherly battles that somehow presaged the future of Ulysses, who, despite also having played football, walked another way.

Interestingly, Ulysses is now fighting in England, the country that gave modern soccer to the world.

"My opponent Harris is British, so the audience will want me to lose, but I will not. I don’t mind being the underdog. I am small, and that’s one of the reasons why I started training. When I was little I was the joke for everyone: 'It's like a Chihuahua' they said, and I was never as good as my brother in soccer, but fighting was different."

That’s why he’s in the UFC now, where he belongs, and where he can fight the best in the world in one of the organization’s newest divisions: flyweight.

“Our division is still small and can be tricky, because we are few but those few are the best in the world, so every UFC fight will be very difficult. If I win a few fights, I could have shot at the title; many of my friends tell me 'you’re in the UFC, you must be very good,’ but I don’t want that; I want to win.”

His brother runs into similar questions.

"Tim Howard (U.S. National Team and Everton goalkeeper) is a big fan. His brother also practices MMA, just not professionally, so we talked about it, and in Mexico they ask me about my brother as the sport grows more and more and they all know he’s a fighter."

And although in different disciplines, this pair of brothers shares a winning mentality. Herculez, the big brother, advises Ulysses on the life of a professional athlete: "We talked about the pressure of being in the public eye, that what you do there will be many people’s business, so you have to stay focused. While our sports are different, life is not. "

And yes, life changes, whether you are a soccer player or a UFC fighter. Ulysses gives his best example: "What has changed in my life? I have a wife now! With the money from my first fight I bought her the engagement ring. Well, actually we’re going to be married in April or May, maybe my brother can come. But she said yes; how will she say no? I'm very handsome (Laughs)."

The older brother doesn’t just share his brother's passion, but he also knows the sport and he had the opportunity to join some of Ulysses’ training camps.

"Oh it has my respect. It’s not easy; it is a profession and a sport that demands a lot physically. I experienced it firsthand. Long ago I learned that I must take care of my body if I want to have a successful career, and the type of training that Ulysses taught me are movements we do not work on in soccer. And it has helped me a lot. Because not everyone does it, it can give you an advantage. You get used to another type of physical wear on the field so when you're tired or out of breath, you find that second breath faster. But I couldn’t be a fighter at all. It's a different mentality," says Herculez, who has been exposed to media pressure and the life of a professional sportsman longer than Ulysses, but who has also managed to see the sportsmanship of an MMA fighter through his brother.

"I even cornered him once. What surprised me the most was the respect every fighter has. It’s a different mentality to what I've seen before. Not everyone has that. You see what these fighters do in their lives - the physical, mental and psychological effort - and anyone could benefit from learning that. "

"Hopefully he can see the fight," says Ulysses, thinking of his brother and his family always supporting him. This will definitely be his toughest fight so far, not only because of the venue, opponent, and the moment, but because none of them will be beside the Octagon.

"I have 12 fights, my parents and my wife were at all of them, and I like it. It can be two thousand or ten thousand people at a fight, and I can always hear my mother's voice. She won’t be there, but her heart will."

"Hopefully I can see the fight," says Herculez, knowing that the same day he will be playing in the local Mexican league with his team.  "It’s hard to watch his fights; he’s still my little brother! But it's what he likes, and he's good at it. He always has our support. I was in London once, did a preseason at the Arsenal facilities, and it’s a beautiful city; I was also on vacation, but I never thought of that city with the jitters I’ll have for this fight. "

Ulysses’ bout will be at 11am Mexico time, the first fight of the night in London, and can be seen free worldwide at the UFC Facebook fan page. Herculez will be playing in the city of Monterrey in Mexico that night, marking a great Saturday for two successful brothers, and a great Saturday for the Gomez family.