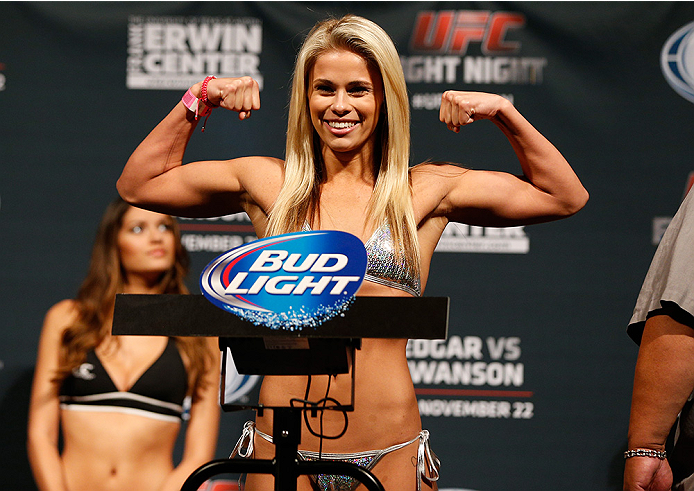 When you hear that Paige VanZant’s first exposure to mixed martial arts came through classes at Ken Shamrock’s Lion’s Den facility in Reno, she gets an instant badge of respect even before she steps into the Octagon for the first time Saturday night against Kailin Curran.

See, if you’ve followed MMA for any length of time, you’ll remember that no team had a tougher tryout than the Lion’s Den, with those initiations taking on a mythical dimension over the last two decades. And while the then 15-year-old VanZant wasn’t exposed to those kinds of workouts, it wasn’t easy either.

“I had different people that beat me up pretty much every day (Laughs), so I wouldn't say there was an initiation per se, but it was definitely a very, very tough start,” VanZant said.

Just five years after she first set foot in an MMA gym, VanZant, 20, will be in the UFC, the latest addition to a strawweight class that gets more and more firepower every week.

“I think the 115 division is the most stacked division out there,” she said. “There's a lot of talent, and all the girls in the division are very, very athletic and very driven, so I see this being a huge, huge thing for the UFC and I see it lasting for a very long time.”

Entering the same division that will soon have 16 new members after season 20 of The Ultimate Fighter concludes, “12 Gauge” Paige will be in a shark tank that some may wonder if she can swim in. Sure, she’s got a 3-1 pro record, with her only loss coming by way of decision to current TUF 20 competitor Tecia Torres, and she’s drawn her share of rave reviews from fight insiders, but at 20, is she ready to battle the best in the game?

“I've been an athlete my entire life, and I'm very, very focused,” VanZant said. “When I put my heart and mind to something, I put everything into it, and for the last five years, I haven't done anything else but fight. I've given up a lot. I gave up school, I gave up a really good job, and I'm just focusing a hundred percent on fighting, and I think that makes up for the experience. Being an athlete your whole life, you know what it is to compete, and I knew that I would make it to the UFC and I was just fortunate to have it come to me this young in my career.”

And as her male peers Jake Matthews and Sergio Pettis have proven in the last year, age ain’t nothin’ but a number if you’ve got the talent to compete, and VanZant is confident that she has what it takes, something that became even clearer when she watched the reality show that she wasn’t able to take part in because she wasn’t 21 yet.

“Watching the show now and seeing all the drama that went on in the house and how stressed everyone was, it's a relief to me,” she laughs. “I really did want to be on the show, and because of my age I couldn't, but I'm not missing as much as I thought I would. There was a lot of stuff I got to avoid. But I really, really try to focus on their fights and I get a look at how each competitor fights, and those are all my potential opponents, so it's nice to sit on the outside and see how each one of them fights and look forward to challenging them in the cage.”

That first challenge comes tomorrow night against the similarly experienced Curran. On paper, this could steal the show from the more high-profile names on the card, but VanZant has no doubt of the end result.

“I think she's very tough and she's going to be a tough opponent, but I don't see her having the technique to beat me,” VanZant said of the 3-0 Hawaiian.

The bout was originally scheduled for the UFC Fight Night event in Halifax in October, but when VanZant suffered a back injury, it was postponed a month. Even worse for VanZant, who had already suffered the disappointment of not being able to compete on TUF, she was forced to stop working with the Team Alpha Male squad in Sacramento because of insurance issues and move back home. All’s well that ends well though, and after healing up and putting together a solid training camp with coach Rick Collup in Reno, she’s ready for her debut and her first shot at punching someone in the face for real since an April 2013 win over Courtney Himes.

“I have a great support system,” she said. “My family's always supporting me in whatever I do and they help a lot. When I'm down or when I need to change things, they always support me. I had to change camps and move back to Nevada because of the injury and I'm very fortunate to have an amazing team backing me in here in Reno. I've got the whole town rooting for me on this fight.”

After Saturday, that rooting section may grow a bit…or a lot. Either way, she can’t wait to get her mission statement out to the world: “I just want to show off that pretty girls are pretty bad ass too.”