"We Chinese fighters have few chances to show our abilities to the world,
but when my UFC fight begins, all the UFC fans will know how I'm going
to fight." - Li Jingliang 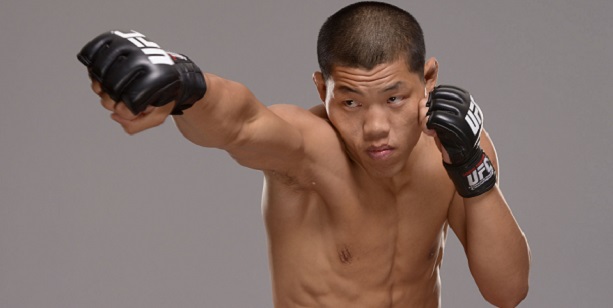 With so many fights and so many fighters, there are certain things that you can take for granted as the months and years stack up in the sport of mixed martial arts. China’s Li Jingliang takes nothing for granted, leaving no stone unturned as he prepares for his UFC debut this Saturday against David Michaud.

That means arriving in Las Vegas a month before his fight, not just to shake off the jetlag of his trip from Beijing, but to get acclimated to everything that has to do with debuting in the Fight Capital of the World.

“It's a long trip to fly from Beijing to Las Vegas and I needed almost a week to get over the jetlag,” said Jingliang through translator Peter Zheng. “Now I'm training here, and I feel pretty good. Las Vegas is a very beautiful city and I really love it here. It's a dreamland for every fighter, including me. I hope I can fight here as frequently as possible, and I want to bring my friends and family to visit here.”

If Jingliang lives up to his reputation as a top welterweight propect, he may be making a second home in Vegas, but at the moment, his jobs are clear – first to win and in the process let the world know that there is a rising tide in Chinese MMA, one that is only going to produce more and more UFC-level fighters in the coming years.

“MMA in China is growing rapidly these days, but a lot of people still don't know the sport,” he said. “So I hope we can use the media and other ways to promote the sport.”

One of those other ways – and the most important - is in the Octagon, and Jingliang has the style to not only be successful, but to get the fans on his side as well, as he’s finished six of his eight pro wins.

“I started training wrestling and Sanda when I was a child, and then I picked up the BJJ techniques very quickly,” he said. “I'm a brown belt now, and I believe I was born to be a MMA fighter.” 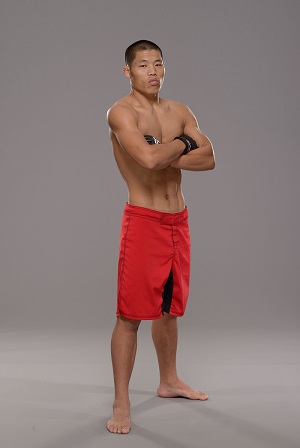 He’s probably accurate on that front, but all the natural talent in the world means nothing if you don’t have someone to refine those talents, and Jingliang found that someone when he moved from his native Xinjiang to Beijing in 2008 to work with the UFC’s first Chinese fighter, Zhang Tiequan and China Top Team.

“That was the real beginning of my professional MMA career,” he said. “I start training MMA with Zhang Tiequan and his team, and since then, fighting for UFC is one of my biggest dreams.”

Eight wins and just two losses later, that dream is about to become a reality, and it’s fitting that Zhang is with Jingliang for the biggest fight of his career.

“He's the first ever UFC fighter from China, and he's given me a lot of good advice about fighting here,” said Jingliang. “With his company, I feel very relaxed, and have the confidence and determination to win the fight.”

If everything seems to be coming together at the right time for the 26-year-old owner of one of MMA’s best nicknames, “The Leech,” that would be almost accurate, but in this sport, there’s always a wrench thrown in somewhere along the line, and for Jingliang, it was a change of opponents, as an injured Danny Mitchell was replaced by David Michaud.

“It was a little bit of a surprise to know my opponent changed, but I'm a professional fighter and this is part of the game,” he said. “And no matter what opponent I meet, I won't change my fighting style. I always use my best weapons to fight.”

And he’s got those weapons sharpened for Michaud, who he has already done a nice breakdown on already.

“I know David is a wrestler, and my team and I already have a detailed analysis on him,” said Jingliang.

And with the ability to finish the fight on the feet or the ground, Jingliang has diehard fight fans interested in seeing what he can do in the wide-open UFC welterweight division. This 170-pounder is just as interested.

“The UFC has a strong welterweight division, and 170 pounds is always the most competitive weight class of the promotion,” said Jingliang. “A lot of talented fighters make the fights very exciting and I have strong confidence in myself to gain a foothold in this division.”

“There is no pressure for me, it only makes me more excited for the fight,” said Jingliang when asked how he feels about living up to the fans’ expectations for him. “When I'm walking into the Octagon, I'll scream like hell and enjoy the cheers from the fans. We Chinese fighters have few chances to show our abilities to the world, but when my UFC fight begins, all the UFC fans will know how I'm going to fight.”