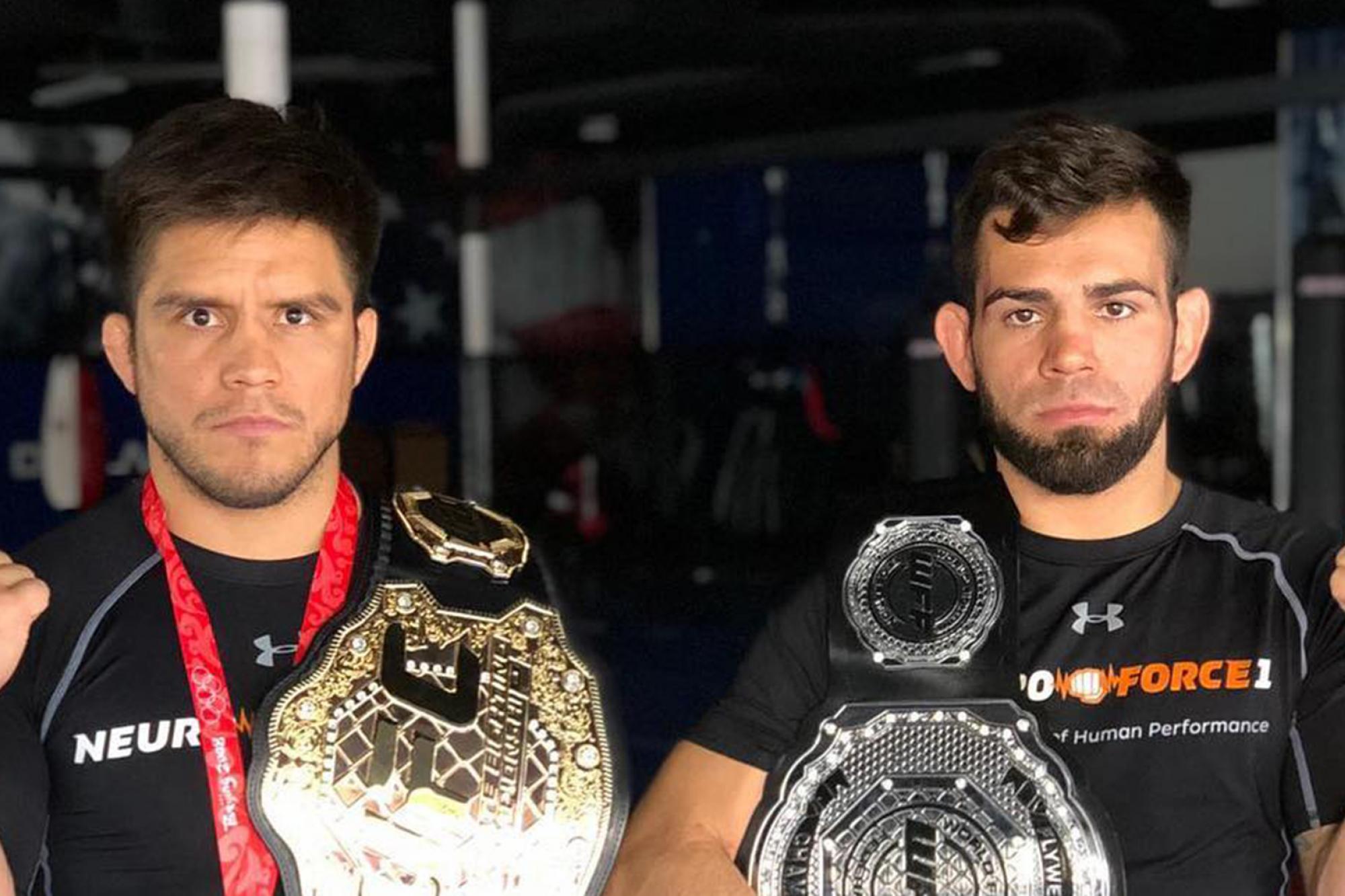 “Man, it was very, very special,” said Silva. “You know how it works, we’ve been training our whole lives for that moment. It was a big time. We had a party, but I was thinking about going straight to the gym."
By Thomas Gerbasi • May. 24, 2019

Less than ten days after a career-defining 32-second knockout of TJ Dillashaw, UFC flyweight champion Henry Cejudo took to social media…to give his teammate the spotlight.

Alongside coach Eric Albarracin, Cejudo stood proudly as a video played, announcing that bantamweight Bruno “Bulldog” Silva was now a UFC fighter. Hugs and slaps on the back followed, witnessed by thousands of the champion’s Twitter followers.

“Man, it was very, very special,” said Silva. “You know how it works, we’ve been training our whole lives for that moment. It was a big time. We had a party, but I was thinking about going straight to the gym. I thought I’ve got to train now and do everything way better than before.”

It’s the reaction you expect from any new member of the UFC roster, and one you hope to hear, because whatever you’ve done on the regional circuit, it doesn’t matter now. What matters is now, and the 29-year-old from Sao Paulo is well aware of that, knowing exactly what it took to get here.

And it wasn’t easy for the Ultimate Fighter Brazil 4 alumnus, who built an 8-2 record before going 1-1 on the reality show. Even getting onto the Team Nogueira squad he called home for several years wasn’t a seamless process.

“At that time it was really hard,” said Silva. “It was Minotauro (Nogueira), Minotouro (Nogueira), Anderson Silva, Junior Dos Santos, and it was a huge team. I went there and I tried to train, tried to talk to somebody to get on the team, but nobody gave me a chance because there was too many people already there. And I’m a small guy.”

Silva, 5-2 as a pro at the time, tried to make his case to whoever would listen.

“I said, ‘I have seven professional fights, I’m good in jiu-jitsu, I’m doing boxing and I’m a capoeira guy,’” he recalled. “I talked to four different guys and they said no. They didn’t give me a chance.”

Disappointed but not discouraged, Silva saw future UFC Hall of Famer “Minotauro” warming up on a stationary back in a small room in the gym. It was his last chance.

“I got in there, I took my shirt off and started to do some backflips,” said Silva. “It was a small space and I did four of them. ‘Minotauro’ said, ‘Stop,’ and told me to come there. He talked with me and I told him I wanted to train there. I was going to leave my city and I told him this is my dream and I want to be world champ one day. That was Saturday. He said, ‘Okay, come here Monday to train.’”

The affiliation with Team Nogueira was a game changer, producing three wins before Silva got a spot on TUF Brazil 4. But making it to the quarterfinals didn’t get him a call from the UFC. It did give him a goal, though.

“In 2015, I was in The Ultimate Fighter Brazil 4 and I came here for the first time,” he said. “I saw how beautiful the U.S. was. And then I saw all the support fighters got and I saw the wrestling too. I knew I needed to go to the U.S. to train wrestling.”

He made a phone call to Albarracin.

“He was a wrestling coach and I needed wrestling and he was in America. I called him and asked him to help me go to the U.S. At this time I didn’t have a lot of money. I had a motorcycle and I had to sell it to go to the U.S. and train and learn English. I was going to go just for two months. This was my plan.”

Silva sold the motorcycle to a friend, but there were still several questions revolving around his trip: housing, food, general life things. Albarracin put his mind at ease.

“I have a place for you to stay,” he told Silva, whose new roommate was Cejudo.

“I started training with him (Cejudo) and he said, ‘You can stay in my house and I’ll help you. You don’t have to worry about food or transportation,’” recalled Silva. “I stayed five months my first time, and everything started from there.”

By 2016, Silva was back for good. He’s gone 3-1-1 since TUF Brazil 4, he got a call from the big show, and now he’s a UFC fighter expected to make his debut later this year. It’s been quite a ride, and he gives a lot of credit to “The Messenger” for helping him navigate that ride.

“A little over two years ago I was in Brazil and I didn’t speak English,” said Silva. “He (Cejudo) taught me how to speak English, he taught me how to do everything. He supports me in everything, he’s worried about me, and he’s done everything for me. I recognize this, and I try to do the same for him. We train together, we live together, and he’s like a brother, friend, father. It’s special knowing I have somebody like him.”

Now he wants to follow his friend and teammate to the top, and he can’t wait for the next chapter to begin.

“I’ve been training a lot and I feel so confident,” he said. “I want to show the world my game and show that I’m a talented fighter. I know everybody says that, but I’m gonna prove it. I’m excited to show the world who I am.”