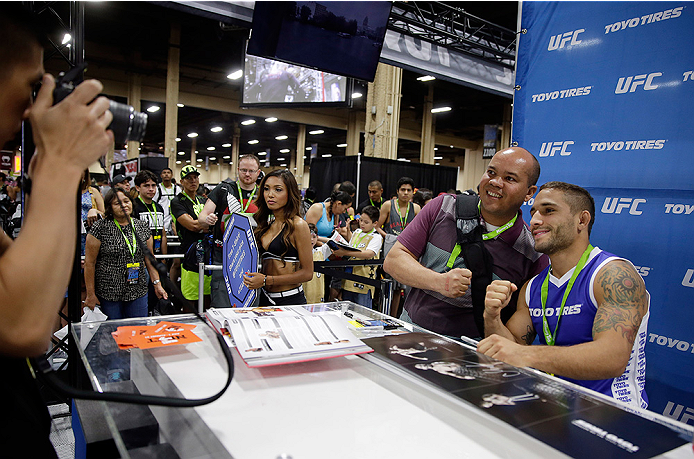 The UFC announced its popular International Fight Week will return to Las Vegas July 7-12, 2015. Since its inception, UFC International Fight Week has increased in size and activities, quickly establishing itself as the world’s largest mixed martial arts celebration. The weeklong festival provides high-energy, all-star entertainment that the UFC is known to deliver and includes numerous diverse events providing something for everyone.

Signature events such as UFC Fan Expo, an Official Pool Party with Octagon Girls® a free concert and Open Workouts will headline the weeklong schedule, with newer events such as Charity Bowling, and the Ulti-man 5K Race making their return. Many of the hottest locations around town including Brooklyn Bowl, The Venetian and The Palazzo Las Vegas, Fremont Street Experience, LIQUID Pool at Aria and El Cortez will host special UFC-themed events. In addition, several new amateur and youth combat sport tournaments will make their debut in Las Vegas during 2015 International Fight Week. The celebration will culminate with a weekend of action-packed fights, including UFC 189 on July 11.

Innovative auctions and unique fan experiences raised thousands of dollars over the week for the UFC Community Works program which benefited Three Square Food Bank, One Drop, Boys & Girls Club of Southern Nevada and The Gay and Lesbian Community Center of Southern Nevada. Fans bid on the opportunity to bowl or sightsee with top fighters, ran side-by-side with the stars at the fund-raising 5k, and took in original creations at “the Art of Fighting” exhibit and auction. In addition, UFC fighters and Octagon Girls taught a free self-defense class at The Center and visited both the Boys & Girls Club of Southern Nevada and Sunrise Children’s Hospital during this special week.

More details and the official 2015 schedule will be released in the coming months, and updates can be found at www.ufcfightweek.com as well as by following UFC International Fight Week on Facebook, Twitter and Instagram (@UFCFightWeek).