An Interesting Year for Luke Barnatt 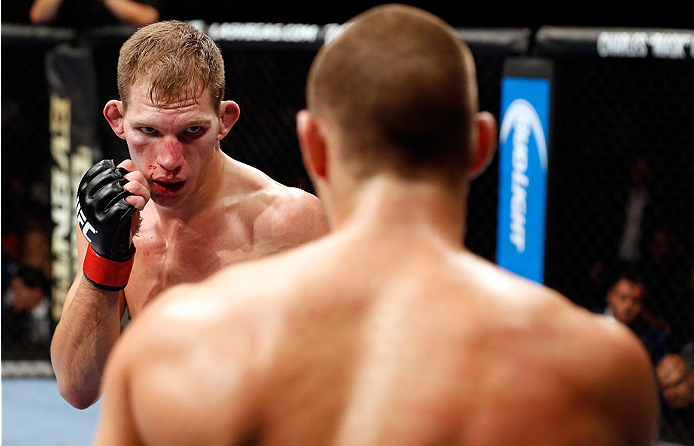 Luke Barnatt knew he beat Sean Strickland. The May bout in Berlin didn’t mark the best performance turned in by “The Bigslow,” but everyone has those days. As the great boxing trainer George Benton once said, “win today, look good next time.”

“There's nothing you can do, and before the decision was read out, I was pretty bummed because I didn't feel like I performed that well,” Barnatt recalled. “I performed to the game plan and beat the guy, but no one wants to watch that fight. I'll just move on to the next one. Then they called out that I lost.”

All of a sudden, Barnatt went from pretty bummed to all-out bummed as the split decision verdict was read out in favor of the American. If not for countryman Ross Pearson’s loss to Diego Sanchez a week later, it would have been the worst decision of 2014.

“The Ross Pearson decision was ridiculous, and that kind of took the sun off my decision,” he said. “Everyone was like 'oh, Ross Pearson got such a bad decision' and I'm sitting there thinking 'well, mine was just as bad.’ At least Diego Sanchez came to fight and actually threw some punches. Ross got to hit him a little bit. My guy just ran away for 15 minutes.”

As soon as the initial disappointment of losing his unbeaten record and half his paycheck wore off, Barnatt was back to being his usual jovial self, and he had a good Saturday night with those who went to Germany to watch him fight.

“I went back to the hotel, partied with my friends and family and girlfriend and I had a great night. I felt like a winner, and I was fine.”

“I watched the fight back the next day and, excuse my language, I was like 'holy f**k, how did the judges score that to Sean Strickland?’ I was so pissed. It hit me pretty hard. But there's nothing that you can do. So I consider myself the winner in that fight, I consider myself to be 4-0 in the UFC and 9-0 overall, and when I win this fight I'm going to be saying I'm 10-0.”

Tonight, Barnatt returns, bloodied (at least on his previously unscathed record) but unbowed, to take on Corpus Christi’s Roger Narvaez in Austin, Texas. When he talks about the fight and his future in the UFC, it’s clear that the result of the Strickland fight has taken nothing away from the 26-year-old’s confidence, and maybe that’s what makes him the fighter that he is. If you dwell too much on yesterday, you lose sight of what’s in front of you now, and Barnatt is not dwelling on yesterday.

Over the last six months, he’s moved to San Diego, where he trains with the Alliance MMA team, he’s gotten engaged to his girlfriend, and he’s put in a full training camp for Narvaez, who makes the return to middleweight after a short-notice debut loss in the Octagon to Patrick Cummins at light heavyweight earlier this year. In short, Barnatt “definitely didn't go into a dark hole.”

What he has done, in addition to the aforementioned items, is make it clear that he has no intention of letting Narvaez pick up his first win tonight. The way he sees it, Narvaez doesn’t even belong in the Octagon with him. Some may say that’s an odd tact to take, because if Barnatt wins, people will say it didn’t mean anything. If he loses, then he lost to an opponent that he said didn’t even belong there. Care to respond, Mr. Barnatt? Of course he does.

“The right thing to do is to say 'the man I'm about to face is a demon, this guy is gonna be a tough test for me, blah, blah, blah,' but I speak the truth,” he said. “I don't make these things up, I don't sit down and think about it; I just say my opinion and that's my opinion. When I fought Andrew Craig, I didn't make up anything. I said Andrew Craig is a tough dude and I was worried about that fight; it was a tough fight for me. This fight is still a tough contest. The guy is talented and a black belt in jiu-jitsu, but it doesn't matter. I don't feel like he deserves to be there, so I'm gonna say it. And once I beat him, once I knock him out and get the win, then the UFC can give me someone I deserve to fight.”

It’s this ability to tell it the way he sees it has made Barnatt one of the most interesting prospects in the entire UFC, and not just the middleweight division. And after a fairly rough year for UK fighters in the Octagon, with Pearson and Michael Bisping both going 1-2, and Brad Pickett and Barnatt both 1-1, it’s time to check in with Barnatt to see if he’s ready to step up and lead the charge for his countrymen. Yeah, you know the answer.

“There is a generation behind me that is coming from England,” he said. “I know them, I've trained with the guys, and I've seen them in the gym. They're younger, hungrier, and more deadly than anyone in the UFC in the moment. But I am the future in the UK. There's no one else that can fight like me, put the sport across like me in England. I'm not there yet, but I'm going in that direction.”