Inspired by the Best, Nah-Shon Burrell Aims for the Top

"You can tell everybody that it is going to be a standup war." - Nah-Shon Burrell 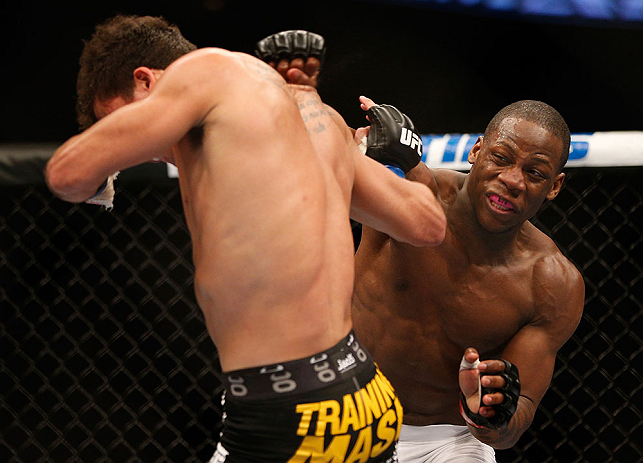 Every once in a while, a person or a group comes along and shows how truly amazing humans can be at something and it compels others to try it. Whether we’re talking about Tiger Woods, The Ramones, The Wu-Tang Clan, or the 1992 US Men’s Olympic basketball team, aka “The Dream Team”, watching others do that voodoo they do so well can spark a fire inside us to pick up a club, a ball, a guitar, a microphone, or even step into the cage.

For 23-year-old Nah-Shon Burrell, who recently made a successful UFC debut, it was watching another fighter’s first fight inside the Octagon that began his own journey into martial arts, “Watching that Anderson Silva vs. Chris Leben fight actually got me into MMA.”

In June 2006 on a free Ultimate Fight Night, the UFC middleweight champion and pound-for-pound king of caged-combat Anderson Silva kicked off his UFC career with a 49 second “Knockout of the Night” of the granite-chinned Chris Leben, who previously had never been KOed. It was the starting point of the greatest career in UFC history as well as providing motivation for a high school aged kid in West Philadelphia to start training.

“I never really had seen or watched MMA before,” remembers Burrell. “When I had seen Chris Leben talking all this trash on TV, I was like, 'Wow, this Chris Leben is about to knock Anderson Silva out! This is going to be good!' I had never seen Anderson Silva before and it went completely the other way. Ever since then, I got hooked. I became an Anderson Silva fan and an MMA fan at the same time.”

Cut to February of this year at UFC 157, when Burrell made an impactful and exciting entrance into the UFC’s welterweight ranks with a unanimous decision victory over Yuri Villefort. After a solid stint in Strikeforce and the W inside the Octagon, “The Rock-n-Rolla” has a pro slate of 9-2, with six of his wins via KO/TKO stoppage and the remaining three going the distance. Not too long ago, Burrell was green to everything MMA, who may or may not have emailed UFC matchmaker Joe Silva to book him his first fight and now, he is a potential rising star with a win under his belt and something to prove.

“I felt like I had to win,” states Burrell. “I was supposed to fight Yuri two other times before that in Strikeforce, but I didn't care who I was fighting. We kind of tweeked the game plan towards the end of the week coming into the fight. It was a little different than I wanted it to go, but I still came out with the W. A lot of people around the world thought that the Strikeforce guys couldn't compete in the UFC. I came in there with a chip on my shoulder. I think I can compete with anybody at 170; no matter what company I fight for.”

The one blemish to his besting of Villefort was the day before when Burrell missed weight. Admittedly, Burrell wasn’t training as hard as he would have been if he were getting ready for a fight during that layoff following the cancellation of the Strikeforce card in September and getting the word that the UFC picked up his contract. Just one look at “The Rock-n-Rolla” and one can tell he cuts a lot of weight and he claims he usually can cut about 35 pounds in two weeks.

“I walk around a little heavy,” explains Burrell. “When I cut, I don't need a lot of time, but I need a little time to acclimate my body to the weight. At that time, I didn't have a lot of water in my system and I was training, so my body wasn't ready for the drastic cut like that. My body shut down in the middle of the cut, so I had to rehydrate my body and start from scratch. Even though I was training for the whole time that I was on that little break, I wasn't fight training. I was a little surprised that I was able to compete the way I competed in there. I am happy with myself for that.”

When asked, if he’ll have trouble cutting weight this time, Burrell answered succinctly, “No.”

Up next is a potential Memorial Weekend fireworks fracas at UFC 160 against “Wonderboy” Stephen Thompson. The undefeated kickboxer from Simpsonville, South Carolina made his UFC debut with a “Knockout of the Night” win over Dan Stittgen at UFC 143 before dropping a decision loss to Matt Brown a couple months later at UFC 145 in April 2012. The 6-1 striking prodigy keeps his MMA training in the family by studying standup under his father, the “Toughest Man in South Carolina,” Ray Thompson, and gets his ground tutelage from his brother-in-law, BJJ black belt Carlos Machado.

“I saw his first fight in the UFC and how they were fancying him up and saying how good he was - I kind of wanted to fight him since then,” reveals Burrell. “I couldn't say anything then because I was in Strikeforce and doing my thing over there. I don't know much about him, but I did see him fight. They said he was like 50-0 in kickboxing? I'm not saying I'm scared to keep it standing because I'm going to keep it standing and bang it out, but we're not going to make this a straight kickboxing match. That wouldn't be smart. It's definitely going to be a standup fight. A lot of good kickers need space to kick and my job is to not give you that space.”

Obviously, “Wonderboy” is a technically stellar striker, but Brown may have written the blueprint to beating Thompson by pushing an aggressive pace and making sure it’s a gritty MMA fight and not a classic kickboxing match. “I could do that and I could do it way better than Matt Brown did it,” asserts Burrell, who has shown a penchant for rumbling at a frenetic speed in his young career. “I think I have better cardio and better hands with knockout ability. You'll see what [Brown] did in his fight, but a lot better.”

In preparation for Thompson, Burrell is crisscrossing “The City of Brotherly Love” between his home gym of the Fight Firm and the Gracie Jiu-Jitsu school Balance Studios. “We're working towards keep moving forward, keep punching, tire them out, and then go for the knockout,” tells Burrell of the Fight Firm’s fighting philosophy. Thompson may have the kickboxing credentials, but Burrell is routinely put through the ringer by Scott and Tuan Pham, who have developed several Muay Thai champions.

“I hate training,” says Burrell. “I treat it like a job. I can't explain it. I guess they say if you like you're training then you're not doing it right. I come in here and I work so hard that I leave exhausted and busted up. I don't like training at all (laughs).”

The grind is the necessary burden that gets “The Rock-n-Rolla” ready for what matters most - the fight.

This Saturday in Las Vegas, Nevada, “The Rock-n-Rolla” will collide with “Wonderboy” in a guaranteed welterweight war. “I'm here in the UFC to stay,” asserts Burrell, who is ready to mark his name amongst the division’s best by stamping out Thompson. “I know a lot of guys might be scared of Stephen Thompson now because he's a good kickboxer and they'll just take him down and lay on him. You can tell everybody that it is going to be a standup war. Fights rarely go the way you expect it to, but if it does, then second round KO/TKO.”

With a highlight reel win this weekend, Burrell could very well inspire the UFC’s next generation.