Tom Gallicchio was one of a few fighters that were given a second chance on Season 25 of TUF
By Walker Van Wey • Jun. 25, 2020

Within arguably the most hostile season in the history of The Ultimate Fighter, there was one man whose optimism seemed to be impervious to the aggression and animosity that surrounded him

Team Quest’s Tom Gallicchio walked into the TUF house as the most unlikely of cast members. After a decision loss in the opening round of TUF 22, Gallicchio found himself in the background as Urijah Faber and Conor McGregor stole the show. Despite rubbing shoulders with The California Kid and the most “Notorious” man in UFC history, Gallicchio notched no memorable moments of his own.

It seemed his journey may have ended with a front row seat to the inception of TJ Dillashaw’s “snake in the grass” image and a six-week look inside the mind of Urijah Faber.

Even when the UFC announced season 25 would be a redemption season for past fighters who never quite had their day in the sun, Tom Gallicchio wasn’t on the producers’ minds. In fact, he wasn’t even deemed worthy of being the last pick for the season.

“I actually wasn’t supposed to be on at all,” Gallicchio said. “Gerard Harris got injured and I took his spot. Although my season had Conor McGregor and Urijah Faber on it, it was mostly about them and less about the fighters. I didn’t have much of a platform.”

“The product of every man who hasn’t given up” wasn’t going to let that stop him. 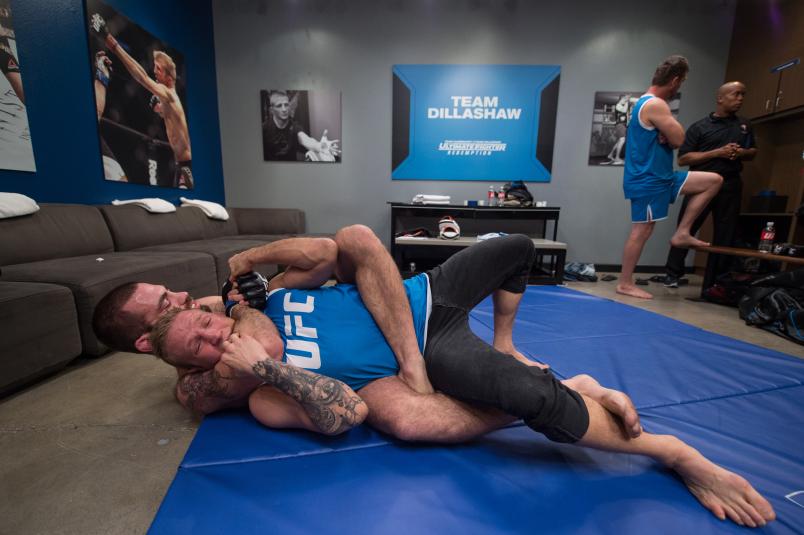 LAS VEGAS, NV - FEBRUARY 03: Tom Gallicchio warms up with head coach TJ Dillashaw before facing Eddie Gordon during the filming of The Ultimate Fighter: Redemption at the UFC TUF Gym on February 3, 2017 in Las Vegas, Nevada. (Photo by Brandon Magnus/Zuffa

He walked into the house with over a decade of experience and a smile on his face. Day in and day out as fighters began to butt heads and lose focus, Gallicchio became more and more happy with the opportunity at hand.

With $10,000 per win and an extra $5,000 per finish, the 30-year-old submission artist knew how much his business and life would change with a strong showing on the show.

He wasn’t at his home gym, at home with his girlfriend or getting face time in with his candy machine company “KO Candy,” but the impression Gallicchio made on the world after his quarterfinal victory that season impacted his life just as much outside the Octagon as it did inside of it.

“There were a lot that wanted machines but there were so many that were so far away that I just wasn’t able to do,” Gallicchio recalls. “I had people hit me up from different countries about a machine but it wasn’t lucrative enough to fly out and service an M&M machine. I still have people come up and ask me about the business.”

Although people still approach Gallicchio to this day about candy machines, TUF 25 helped fantasy became reality for “Da Tank” when he parted ways with the candy business earlier this year.

“I got a lot of candy machines in a lot of places and I actually just got out of the business about a month or two ago,” Gallicchio said. “I built it up and sold it. I’m getting ready for my next big move; I’m looking to open up a gym. It’s time to do bigger and better things and time to start training my own fighters.”

Between free food, all the AC a guy could want and bonus money for wins and finishes, Gallicchio made the most of his time on TUF 25, despite not winning the contract. For a guy who never had a real run in the UFC, he has made a life out of fighting for himself and the road is getting smoother and smoother.

While every fighter seems to leave the TUF house with horror stories and, in some cases, a shot to their image, Gallicchio patiently waits for the opportunity to put it all on hold once again for another run at the six-figure contract.

“I still will text some of the producers asking when the 155 redemption season is coming around,” Gallicchio said. “I just think TUF is an amazing time and an amazing opportunity for fighters young and old and I hope we get another 28 seasons.”

For seasons 22 and 25 of The Ultimate Fighter sign up for UFC FIGHT PASS today!