Inside The Irish Invasion - Part 6 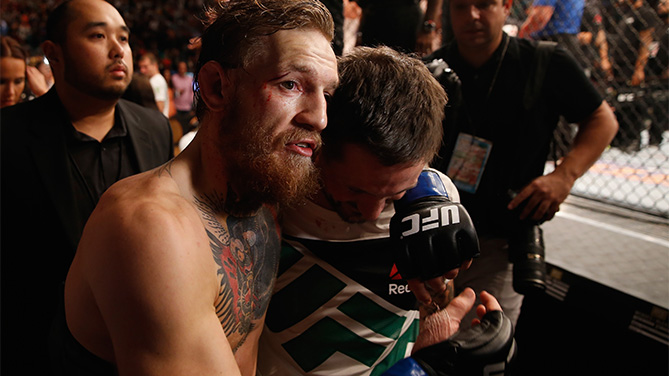 The MGM Grand Garden Arena might only be half full, but the Irish fans are already in full voice as Neil Seery makes his way to the Octagon to face Louis Smolka. Although the Irishman’s hands do the talking in the early exchanges, it isn’t long before the Hawaiian’s grappling ability allows him to take control.

Seery’s defiance escaping a handful of submissions draws great swells from the assembled fans. At one stage the American fans manage to get a ‘USA’ chant going, but in a matter of seconds it’s drowned out by hisses that slowly turn into an ‘Ole, Ole, Ole’ chorus. The Dubliner doesn’t get the nod on the night, but after showing the heart of a lion, the loss undoubtedly won the flyweight a host of new fans.

Cathal Pendred enters the arena to a song synonymous with Ireland’s greatest sporting summer, ‘Italia 90’, ‘Put ’Em Under Pressure’. After last night’s weigh-ins, people have pointed to the celebratory feel around UFC 189 as this generation’s equivalent to the Irish soccer team’s success in 1990.

The Irish welterweight ends up on the wrong side of a decision and suddenly there’s a slightly different atmosphere in the arena. There had been so many good omens this week, but these losses so close to McGregor’s bout with Mendes certainly didn’t bolster the gathering’s confidence.

Exactly like the day before at the weigh-ins, Gunnar Nelson is greeted like a hometown hero in a location that might be the polar opposite to his Icelandic dwelling. Despite his ultra laid back manner, it means a lot for the Mjolnir man to compete in the ‘Fight Capital of the World’, and his performance points to that.

Many believed the John Kavanagh black belt might be at a disadvantage in the striking department, but his knockdown of decorated striker Brandon Thatch and his subsequent rear naked choke finish that follows it once again put him into the conversation for bigger tests in UFC’s welterweight bracket.

The roar is huge. It feels like the people have gained confidence from seeing ‘Gunni’ have success with techniques that are seemingly more favorable to his opponent. With ‘The Notorious’ set to answer the much cited wrestling question in the event’s main event, the stoic Icelandic welterweight instilled a belief in the vocal Irish gathering.

As the opening bars of ‘The Foggy Dew’ are played around the MGM Grand Garden Arena a green mist pours out from one corner of the venue only to reveal an ascending platform that carries Irish superstar, Sinead O’Connor, to the ceiling of the space. McGregor appears below her and just before he arrives at the Octagon, he salutes her before he goes about his business.

The two round exchange with Mendes sends the arena into hysterics. There is fear, humor, despair and delight, but eventually Mendes finds himself falling to the floor where Herb Dean saw it fit to call his effort discontinued.

It’s an emotional moment for McGregor, tears stream down his face as he reaches the Promised Land. He is the king, or at least one of two kings in the featherweight division.

Kavanagh and McGregor leave the Octagon with their arms around each other and tears are noticed in both their eyes. The chorus heralds the arrival of a new era at 145 lbs. for the man who has justified their unwavering support over the last week in ‘Sin City.'