Inside The Irish Invasion - Part 5

Part V: A Sea of Green, White and Orange 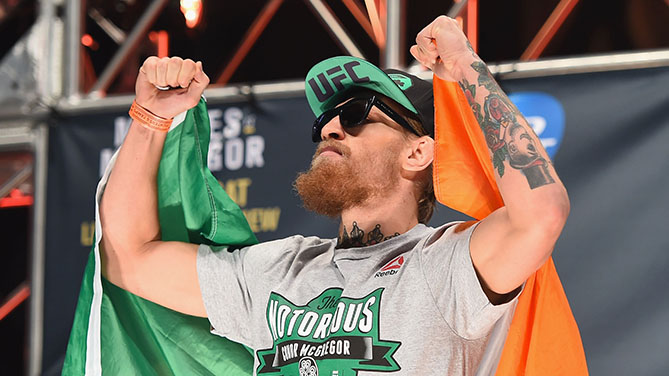 Although the Irish party didn’t stop until 10 a.m. on Friday, the invasion is in full effect at 2 p.m. at MGM Grand. A sea of green, white and orange moves towards the arena, with only one voice needed to launch the whole crowd into a chorus of, “Ole, Ole, Ole:, “You’ll Never Beat the Irish”, or “There’s only one Conor McGregor.”

It certainly feels like this generation’s definitive sporting moment. More than 10,000 people are packed into an arena to see a man step on weighing scales and then stand in front of another man. They’re singing, dancing and smiling – it’s McGregormania. Even the people who don’t hail from the Emerald Isle have become Irish in the party atmosphere.

A small ball is getting smacked up into the air. Just before it looks like it’s going to land, another person hits it back up again. Each time a solid connection is made the crowd sounds its delight. When a security guard takes the ball away from the assembly a massive boo echoes around the arena. Seeing the disappointment on the security guard’s face, laughter clatters through the stands letting him know it was only a bit of fun.

More revelations of Aldo’s rib injury don’t hinder the atmosphere, but some activity on social media regarding a physical altercation with McGregor and Urijah Faber is certainly up for discussion between songs. The DJ sends the crowd into fever pitch just before the arrival of Joe Rogan, Dana White, Lorenzo Fertitta and assorted other personalities to the stage. Their faces show the enormity of the event – the biggest weigh-in the sport has ever seen. 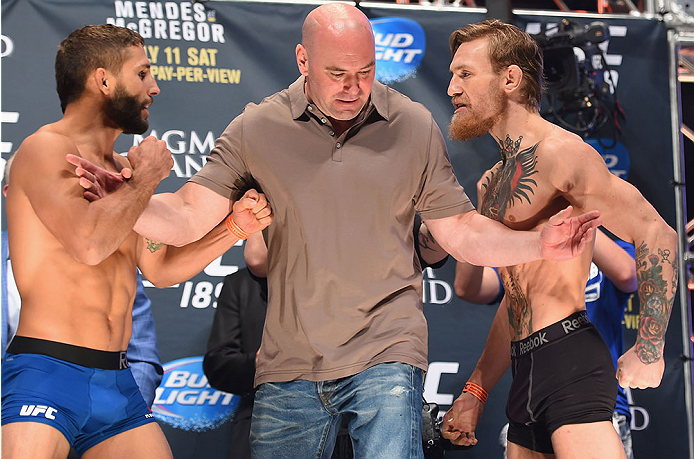 The arena explodes as the first of the Irish charges, Neil Seery, appears wearing the tricolor. Again, after Cathal Pendred weighs in he holds the Irish flag aloft while he’s nose-to-nose with John Howard. Gunnar Nelson might not have an Irish flag with him, but his ovation is akin to all of his SBG brethren and Seery’s.

Finally, when the star of the show makes his arrival, the noise is deafening. He strips down expose his signature tattoos and when his weight is confirmed at the featherweight championship limit, he contorts into a bodybuilder’s pose and sends a war cry to the back of the arena.

On his arrival to the stage, Mendes bolts for the champion and the only thing that stops him is the UFC President Dana White. They exchange words and Chad Mendes smiles throughout the chaos, nodding his head. He is ready for “The Notorious” and the nation that stands behind him. 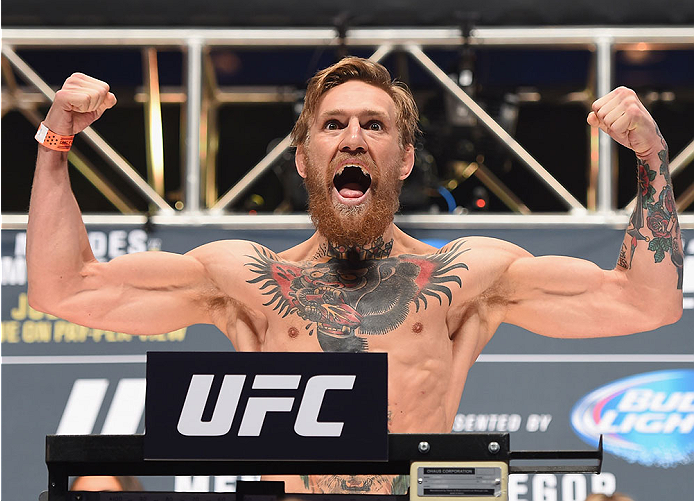 “Chad is an overblown midget,” McGregor tells his adoring public. “Tomorrow night I’m going to cut him in half and raise gold for Ireland.”

The Green Army leaves the arena and make its way into the Las Vegas night, packing out of MGM Grand as they band together to sing songs of heroes from the past and, of course, songs about the man who has brought them here.

Even at the UFC Fan Expo earlier in the day there were pictures of the Irishman everywhere. An Irish flag is emblazed on the bags in which the droves of people carry their purchases home.

Speaking at the fan event, Dana White even claims that a potential date in Ireland’s historic national stadium, Croke Park, is still on the cards.

“We want to do Croke Park, we really do,” he tells the crowd. “If this kid wins that title, we want his first defense to be in Croke Park.”

There’s no denying the buzz from back home when it comes to “The Notorious”. Even the band U2 takes time to send him a message wishing him good luck. It’s not bad for a man who collected his last social welfare check just over two years ago.