Inside The Irish Invasion - Part 4 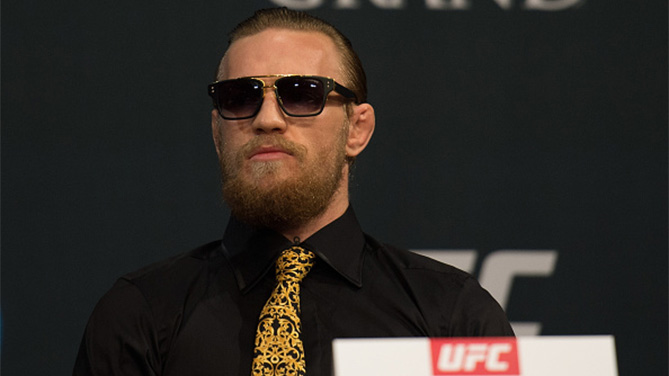 The queue of enthusiastic fans stretches around several corners leading up to the MGM Grand location for UFC 189’s press conference at 10 a.m. Thursday. The numbers of Irish continue to grow as Conor McGregor’s interim featherweight championship bout with Chad Mendes approaches. A young man in his late 20s is sleeping, slumped against a wall having inevitably fallen into the time warp of “Sin City."

McGregor appears before the masses wearing a tie with a golden pattern through it and a pair of gold-framed sunglasses, a metallic collection he sincerely believes will grow on Saturday night. Famously a late riser, the early shift doesn’t seem to bother him as he launches into his signature spiel.

“I am number one. If you are number one, who gives a sh*t if number two steps out in place of number three,” he tells the crowd, addressing Jose Aldo’s late withdrawal. “At the end of the day I’m number one so it makes no difference to me who is standing across the Octagon from me. I will win.”

At the end of each statement the Irishman makes, the crowd erupts with applause and cheers. In the presence of his countrymen, his expressions seem more Irish, as if he’s directing his answers to them.

“He’s a little 5-foot-2 twerp. He should’ve kept his mouth shut, I’m going to slap the face off him and that’s it,” he says as cheers fill the room again. 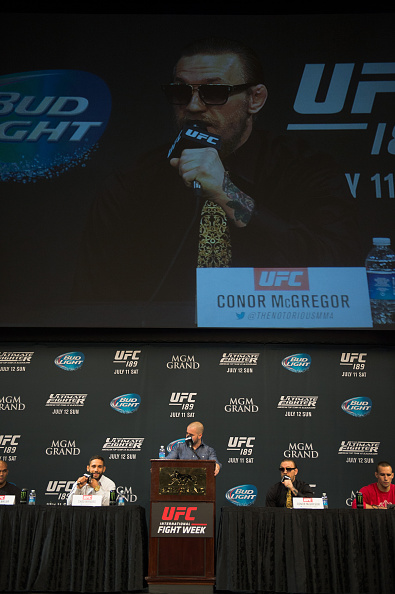 The range of McGregor’s appeal is noted as a young child, maybe six or seven years of age, begs the contender to do grievous harm to Chad Mendes in their interim title clash.

“Conor, can you please rip Chad Mendes' head off?” his little voice shouts to the stage, warranting a wide smile from the Irishman.

The news of SBG fighters Frans Mlambo and Sinead Kavanagh booking their place in Saturday’s IMMAF amateur world championship finals travels down the strip from the Flamingo to the MGM Grand. With another couple of wins over the Americans -- a good omen for McGregor’s bout according to some -- John Kavanagh’s team now has an opportunity to claim three world titles on Saturday.

Gunnar Nelson and Cathal Pendred file in for their own press obligations after the morning press conference. A big welterweight, Pendred says he’ll have no trouble making the required welterweight limit, something that never worries honorary Irishman Nelson, who skips the cutting process altogether.

Neil Seery is nowhere to be seen. The Dubliner never hides his lack of enthusiasm when it comes to press-related work and he no doubt got some satisfaction out of not being called upon for a gaggle of interviews. 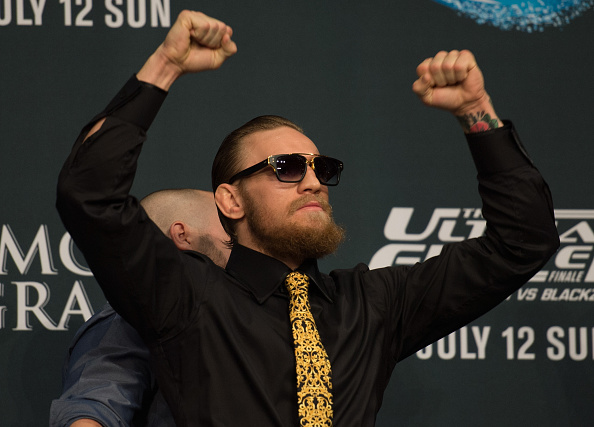 Later in the day, scores of the Irish support make their way to the Cosmopolitan to support Ireland’s Catherine Costigan in her Invicta Fighting Championships debut. As McGregor appears on the big screens in between the fights they raise the roof.

Those looking for signs of things to come at UFC 189 leave the venue disappointed. Costigan succumbs to a rear naked choke as Amber Brown, an American, dominates her en route to taking the first round victory. The Irish party falls silent; it wasn’t supposed to happen like this, not this week.

Newsfeeds fill up with pictures of another one of Ireland’s mixed martial arts celebrities as he arrives from the homeland. Tony McGregor, father of the surging SBG featherweight, shot to fame after his witticisms were broadcast on ‘The Notorious’ documentary. The Irish run towards the Tony with their phones out desperate to get a picture with him. He always obliges and always has time for a quick chat.

Things are gearing up for an electric atmosphere at today’s weigh-ins – a guaranteed memorable event when “The Notorious” Irishman is in town.