Inside The Irish Invasion - Part 2

Part II: The Irish Are Coming 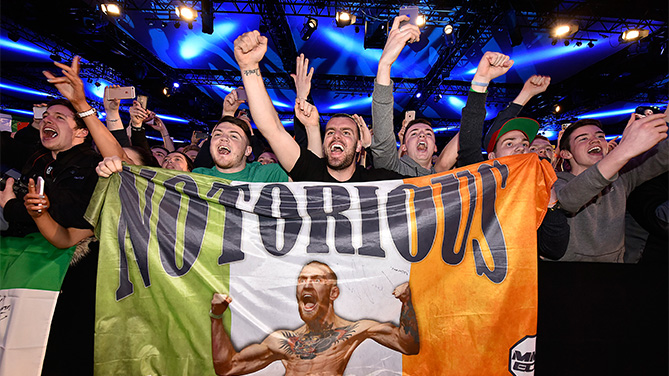 Dublin airport is a hive of activity on a wet Tuesday morning as yet another flock of Conor McGregor’s Irish support sets out for Las Vegas.

RELATED CONTENT: Inside The Irish Invasion - Part 1 | McGregor Will Intimidate, Infuriate, Dominate. All At Once | McGregor Plans To 'Butcher' Mendes

“Did you see the latest Embedded lads?” asks one young man out of a group of eight who all nod their heads affirmatively. “This Mendes lad, I don’t know what to think of him. Is he tougher than Aldo do you think?

“He’s a wrestler, you know?” the same inquisitive chap ponders as the others try to answer him simultaneously.

“No, it doesn’t matter who they put in front of him, he’s the best,” says another one of the crew when the rest eventually stop talking. “He’s going to take that belt home to Ireland and the UFC are only going to get it back when he moves up to lightweight.”

It’s a sentiment that seems to satisfy everyone.

From the staff at baggage claim right up to security at international pre-clearance, there is no mystery as to why the people are traveling to "Sin City." Once they see the final destination on the boarding passes, the initial question of whether the travelers are heading to see "The Notorious" in action is skipped altogether.

“So, you think McGregor’s got this one?” says the United States Customs officer stationed at Dublin Airport. “You got him in the first round or what? Are you going to put a bet down while you’re over there?”

Eamon Kidd and Alan Nolan made the trip home all the way from Perth, Australia to travel to the event with their friends from the Irish capital. Even on the other side of the world the Dubliners felt the momentous pull of the event.

“We had to come back for it,” Kidd tells me. “This is a huge sporting event for the Irish and we didn’t want to miss out on it. It’s the type of thing that people are going to be talking about for years if he wins. Even back in Australia, there’s a massive Irish population over there but even the Aussies and Kiwis are talking about him.”

The MGM Grand’s signature golden lion greets those lucky enough to be staying in the resort that will host UFC 189 from inside a mock Octagon as soon as they walk through the doors of the infamous casino. Images of McGregor with a tricolor behind him are draped on the side of the building. His hands are aloft and his mouth is stretched out in the midst of a war cry.

Catherine Costigan makes her Invicta debut two days before McGregor locks horns with Mendes. She, too, arrived weeks in advance of what will be the biggest test of her storied career.

The news of the success of another resident of the “Mac Mansion” crew has provided the Irish with a good omen as well. James Gallagher, one of the most highly touted amateurs in Europe, took a victory over American prospect Sam Agushi in the first round of the IMMAF tournament that will eventually crown several amateur world champions. However, it’s Saturday’s main event, which pits Ireland against the U.S., that the traveling supporters are really worried about.

Irish brogues bounce around the roulette tables, the occasional “There’s only one Conor McGregor!” chant spontaneously erupts for no good reason – for any reason. The excitement is measurable around Las Vegas Boulevard. It feels like a single spark could ignite the festivities in the traveling crew.

Today at the UFC 189 open workouts, the Irish got their first sighting of their Pied Piper of mixed martial arts. If the atmosphere around The Strip is this electrifying without McGregor, one can only imagine what will happen when he appears before his amorphous, faithful following.