Inside the Camp: Updates from Alliance MMA

Ask any fight fan to name the top gyms in the sport and the same collection of names will probably come out first.

One that may not get as much instant love, but deserves billing alongside those familiar talent factories is Alliance MMA, where Eric Del Fierro and a collection of talented coaches have been turning out top tier talent for a decade.

“We fall into those Top 5 gyms in the world, but the difference with us is we’re still a small facility compared to the other teams that are out there – the big name teams – but I think we get just enough mention,” said Del Fierro, who is not only the head coach at the San Diego fight team, but a full-time firefighter and EMT as well. “We’re going to have our ups and downs as a team and when we’re on our highs is when we get the most attention.” 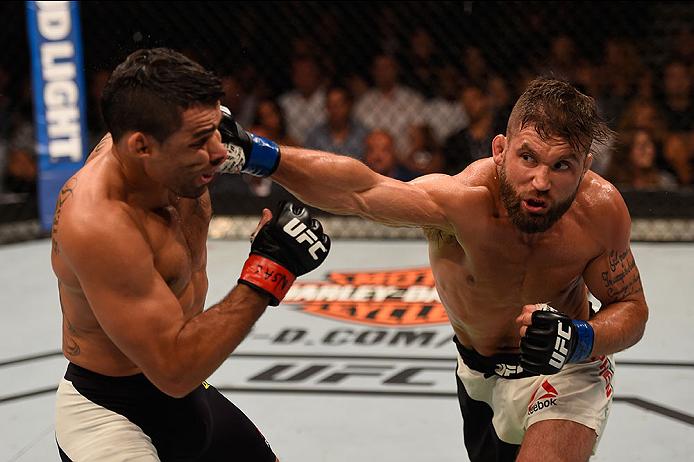 Right now, the team is in the spotlight thanks to a strong run of results over the last two UFC events, as Jeremy Stephens picked up arguably the biggest win of his career late last month, defeating former bantamweight champ Renan Barao in Las Vegas before Polo Reyes earned Fight of the Night honors and Dominick Cruz retained his bantamweight title at UFC 199 last weekend in Los Angeles.

As one of the longest tenured fighters on the team and certainly its most accomplished member, Cruz sets the tone and example in the gym – not with his words, but with his actions.

“His determination and his will to get back in there and compete is admirable and all the guys and girls feed off of it,” his long-time coach explained. “Everybody is in there having their own battles going into their fight, so seeing what he went through and his determination to not quit makes everyone work harder and stay with their dream.”

Following three different ACL repairs and a torn groin that limited him to one fight in three years, Cruz returned to the Octagon in January and picked up a split decision victory over TJ Dillashaw to reclaim the bantamweight title he was stripped of during his extended injury hiatus.

As an encore last weekend in Los Angeles, Cruz made it clear that he was all the way back by putting his nine-year rivalry with Urijah Faber to bed, collecting a unanimous decision victory over “The California Kid” in their personal rubber match.

“We never once doubted that he was going to be back. It was more just following his commitment and saying, ‘If this is our choice where we’re choosing not to retire, we’re 100 percent in.’ Nobody ever sits back and doubts it. We just figured, ‘Okay, we’re coming back and that’s all there is to it.’

“After we did it, as Nate Diaz said, ‘I wasn’t surprised,’” Del Fierro laughed, leaving out the Stockton native’s choice of pronouns. “I know what he brings to the table and he’s just too tough to quit.”

In addition to being tethered to Cruz in the minds of fight fans, Alliance also stands out as a place where numerous international fighters have chosen to call home for their fight camps over the years, with the likes of Alexander Gustafsson and Ross Pearson setting up shop at the San Diego fight camp and numerous others having passed through at one time or another.

These days, the gym is also garnering a great deal of attention for the collection of high level female talent that calls it home, even if the man at the top of the coaching hierarchy isn’t sure how his spot suddenly became the place for female standouts to come and train.

“For the past decade, we’ve always had guys from different countries come out and our team is just huge, but we never had females,” Del Fierro explained. “I think Kerry Vera was one of our only females, but then all of a sudden The Ultimate Fighter came on and that brought the 115-pound girls.

“I want to say Bec Rawlings was one of the first ones that came over. She was living at the gym, grinding, and she stuck with it and then I think Jessica (Penne) and Angela Hill (came out) shortly after and then it just kept growing.

“Cat Zingano is here with us now, but I don’t know (how it started),” he laughed. “They kind of snuck in there and now there is a whole bunch of them here now and they’re all doing great. Everybody is motivated and it’s going well right now.”

And it’s a female fighter that he points to when asked to single out one athlete everyone should be paying attention to from the gym over the next year.

“I think you’re going to see a resurrection of Angela Hill,” Del Fierro said of the Ultimate Fighter Season 20 competitor, who made her Octagon debut with a single professional MMA bout under her belt and was released after back-to-back losses to Tecia Torres and Rose Namajunas.

Invicta FC quickly swooped in to sign “Overkill” and the 28-year-old has already gone 3-0 to start 2016, claiming the all-female organization’s strawweight title last time out.

“She wasn’t ready to be in the UFC when she was there and you’re going to see a new Angela Hill in Invicta and whatever comes her way after that. She’s comfortable with our camp, she’s learning, she’s progressing she’s happy. You’re going to see a different athlete.”