Inside the Camp: AKA update

If you want to know what makes the American Kickboxing Academy one of the most consistent and successful gyms in mixed martial arts, look no further than the trio of UFC champions to come from inside the walls of the San Jose, California outfit.

After a lengthy run of producing top contenders and title challengers like Josh Koscheck and Jon Fitch, Cain Velasquez was the first from the camp to claim UFC gold, doing so with his first-round technical knockout victory over Brock Lesnar at UFC 121 on October 23, 2010. He would lose the title to Junior Dos Santos in his next fight, but reclaim the title 13 months later with a thorough drubbing of Dos Santos at UFC 155. 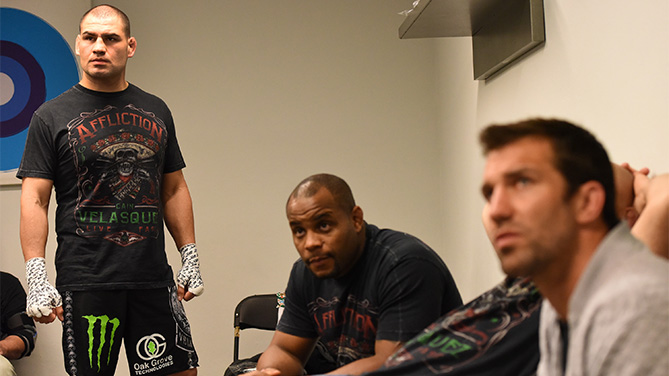 Last year, Daniel Cormier became the second member of the team to claim UFC gold, surviving a first-round scare to earn a third-round submission win over Anthony Johnson to claim the vacant light heavyweight title, the belt he will defend against chief rival Jon Jones at UFC 197 next month in Las Vegas.

Seven months after “DC” ascended to the top of the light heavyweight division, Luke Rockhold did the same at middleweight, making good on his promise to knock Chris Weidman from the ranks of the unbeaten by winning the title with a fourth-round stoppage victory at UFC 194.

“The fighters are all there for each other,” begins Javier Mendez, who founded the gym in mid-1980s and stands as one of two head coaches, alongside “Crazy” Bob Cook. “Luke Rockhold – I’ll use him as an example – if he notices something is wrong with one of the younger fighters, he goes out there and does things for them. ‘Hey, how you doing?’ or sits down and talks with them; Daniel Cormier is the same way because he’s the team captain.

“Even Cain Velasquez – whenever he’s here, he’s helping somebody out. Cain doesn’t stay to himself. That’s the kind of atmosphere we have around here. It’s not easy to do, but if we keep maintaining that and keep reminding ourselves that we’re a team, why it’s important to stay that way, it will give us the motivation to stay true to what the team spirit is all about.”

The trio sets the tone, both in actions and effort, and they feed off each other at all times. 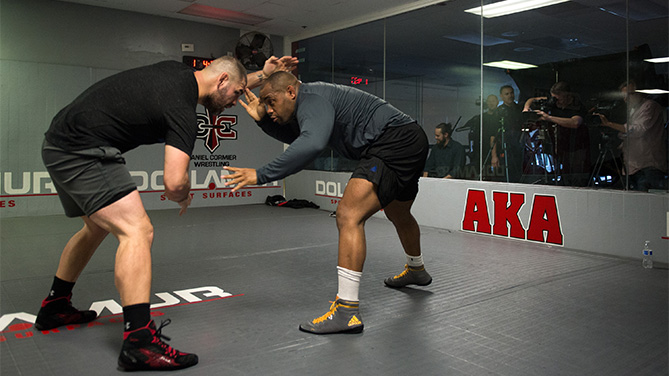 Coming away from his first encounter with Jones last January, Cormier discussed not having Velasquez in his camp to help him prepare, as the former heavyweight champion was recovering from knee surgery. It wasn’t a knock on the men that were there to help get the two-time Olympian ready to challenge for the light heavyweight title, but a testament to the bond between the two wrestlers and how Cormier feeds off the work he does with Velasquez inside the gym.

“Cain wasn’t there for him for the first fight and he gets a lot of confidence from the push that Cain gives him,” Mendez says, noting that Velasquez is “slowly getting into” training after being forced out of a championship rematch of his own earlier this year. “Nobody pushes any fighter in our gym the way Cain does; there is no fighter that can put pressure on people the way he does.

“DC was missing that and the good thing for DC in this one is that he’ll have Cain the last two weeks of his training camp, so everything is coming in perfect. He’s so motivated. He knows he’s the real champ, but for him to validate that with everybody else, he needs to gain that win that he didn’t get from Jon the first time.”

While Velasquez and Cormier have the kind of big brother-little brother bond where the younger is keen to listen to every piece of advice his older sibling has to offer and put it into practice in his own life, Cormier and Rockhold’s connection is something entirely different.

The reigning middleweight champion is the youngest of the tetra-pack of talented UFC competitors forged inside the walls at AKA and while he, Cormier and everyone else that knows them will tell you how much they love each other deep down, they’re also quick to point out that neither will concede any ground to the other – in anything, ever – and it makes for some interesting exchanges both inside and outside of the gym.

How combative and competitive can the two be? Ask the normally stoic Velasquez about the back-and-forth interactions between the two and the big man can’t help but smile ear-to-ear and start laughing, likening the dynamic to Cormier being at the head of the classroom trying to teach a lesson and Rockhold throwing spitballs from the back row, books closed, feet on the desk, still ready to ace the test.

“From the very beginning when he came here, DC knew how to pull strings and he would start trouble in the gym,” Mendez, who has caught an errant shot or seven breaking up disagreements and sessions that got a little too hot between the two, says. “DC would just pull people’s strings and I had to tell him, ‘I appreciate that you’re trying to get these guys riled up, but you’re getting them in real fights; you need to stop.’

“But you’ve got to understand, once you cry wolf, to a lot of people, you’re still that guy. So in Luke’s mind, he’s still that guy. A lot of the time, DC might say something and Luke will fire right back at him.

“They’re all three like brothers, but DC and Cain will never fight. But DC and Luke? They will and they have. They love each other, but they will fight.”