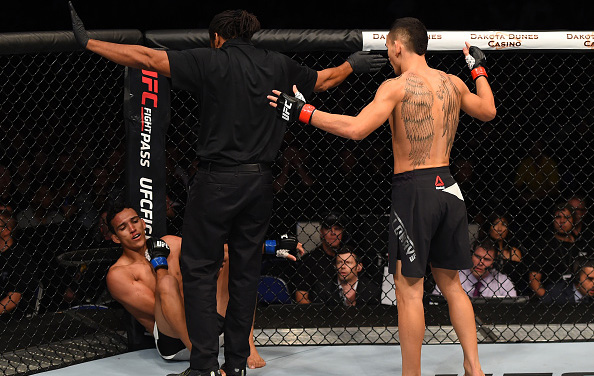 A highly-anticipated clash between featherweight contenders Max Holloway and Charles Oliveira ended in anticlimactic fashion Sunday at SaskTel Centre in Saskatoon, with Holloway winning via first-round TKO in the UFC Fight Night main event when Oliveira couldn’t continue due to injury.

The victory was the seventh straight for Waianae, Hawaii’s Holloway, the fifth-ranked contender at 145 pounds.

Holloway focused his early attack on the seventh-ranked Oliveira’s body, and while the Brazilian pulled guard and looked to take the fight to the mat in the second minute, Holloway was having none of it. When the two rose, Oliveira held his left collarbone with his right hand and put up his left hand to hold Holloway back. Oliveira eventually sunk to the mat still holding the collarbone, referee Herb Dean waving off the bout at 1:39 of the opening round.

With the win, Holloway improves to 14-3; Sao Paulo’s Oliveira, who saw a four-fight winning streak snapped, falls to 20-5 with 1 NC.