Injuries behind him, Nogueira ready to fight 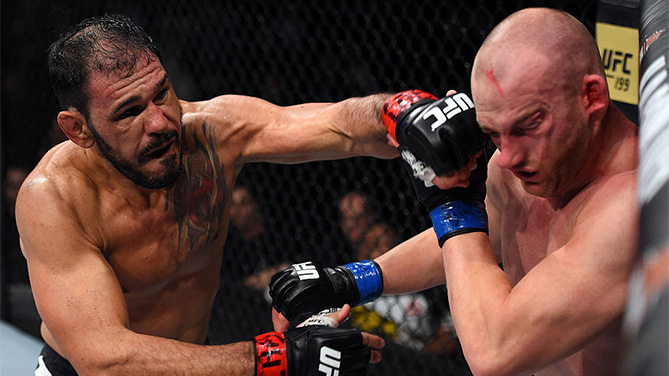 When Antonio Rogerio Nogueira steps into the Octagon on Saturday night, it will mark the first time since 2011 that the Brazilian light heavyweight has competed twice in the same year.

Even during his early years, Nogueira was never one to employ the “Cerrone Method” when it came to his career, logging more than three fights between January 1 and December 31 of a given year just once (2002). But for the better part of a decade, you could count on Noguiera to make two or three appearances without fail.

But that has changed over the last several years.

Injuries kept Nogueira out of the cage completely in 2012 and limited him to just a single appearance in the three years that followed. He managed a 1-2 record during that time, beating former champion Rashad Evans before dropping back-to-back contests against Anthony Johnson and Mauricio “Shogun” Rua.

“I had a lot of injuries in the last four years,” Nogueira said, reflecting on the slow pace of his career in the cage. “I didn’t fight in 2012 and since then, I haven’t fought two times in a year (until now). I had a big problem with my lower back since 2013 and I had surgery on my knee in 2012 and that’s the reason I didn’t fight as much as I wanted.

“I want to fight two times a year, but I couldn’t because I had those problems,” added the former PRIDE standout, who holds victories over luminaries like Kazushi Sakuraba, Dan Henderson and Tito Ortiz over the course of his storied 15-year career. “This is a very good time for me. I’m in better condition and I don’t have any injuries. I’ve been doing a lot of physical therapy – one hour, two hours a day – and I think now I’m 100 percent.”

Three fights prior to stepping into the cage with Rua at UFC 190, Nogueira’s twin brother, legendary heavyweight “Minotauro” Nogueira, graced the Octagon for a final time, dropping a unanimous decision to Stefan Struve. Many questioned whether “Little Nog” would join his brother in retirement.

He didn’t, proving he’s still a dangerous threat in the 205-pound ranks with a first-round stoppage win over Patrick Cummins earlier this year at UFC 198, and he has no intention of leaving just yet.

“I don’t think I have to retire now,” Nogueira said, laughing when asked if his brother is attempting to lure him out of the cage. “No, he sees my training every day and knows I’ve been training very well this year, so he thinks I have a chance to beat the best guys in my division.”

The 40-year-old veteran gets the opportunity to do just that this weekend when he takes on Ryan Bader in the main event of the UFC’s return to Sao Paulo. It’s a bout that carries big stakes for “Little Nog,” who sits at No. 9 in the light heavyweight rankings, five spots behind Bader, as a victory would not only return him to the fringes of title contention in the turbulent division, but bring him a measure of revenge as well.

Nogueira and Bader shared the cage at UFC 119 a little over six years ago, while the Brazilian was in the midst of a seven-fight winning streak and the former TUF winner was transitioning from prospect to contender. Bader won the bout by unanimous decision, propelling him into a showdown with Jon Jones, while Nogueira was forced to take a step back.

This weekend, they’ll do it again and the proud Brazilian would like nothing more than to avenge his earlier defeat in front of the partisan fans in Brazil’s most populous city.

“This fight means a lot to me because I have a chance to fight against Ryan Bader – he’s a Top 5 fighter in the UFC,” said Nogueira, who makes his third consecutive Octagon appearance in his home country after having previously logged just a single bout in Brazil over his previous 27 fights.