Read on for the best of former WEC and UFC lightweight champion Benson Henderson... 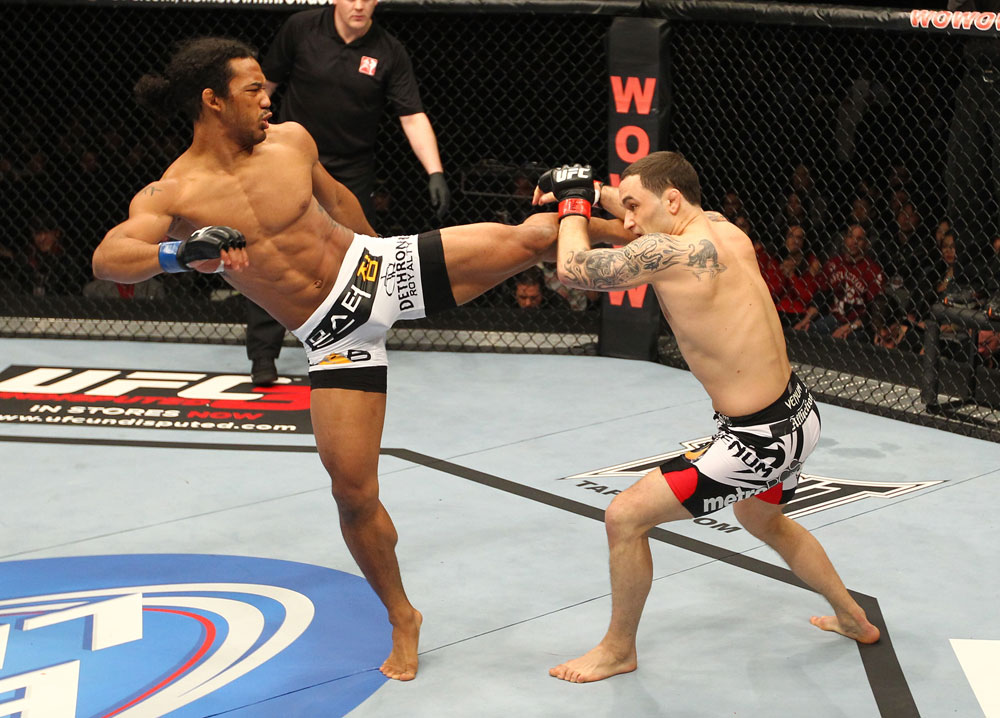 Benson Henderson returns to the Octagon next month when he takes on fellow top-ranked lightweight Rafael Dos Anjos in the main event of the August 23 UFC Fight Night event in Tulsa, Oklahoma.

Over the last five years, the 30-year-old known as “Smooth” has proven himself to be one of the very best in the treacherous 155-pound ranks, claiming championship gold in both the WEC and the UFC while amassing a 14-2 record over that time, with both setbacks coming in title fights opposite his chief rival, Anthony “Showtime” Pettis.

As the MMA Lab product prepares to return to the UFC cage, here’s a look back on the best of the best from Benson Henderson.

If you haven’t seen this fight, do yourself a favor and go watch it right now. Stop reading, open up UFC FIGHT PASS and enjoy 25 minutes of two of the best lightweights in the UFC today going toe-to-toe in the little blue cage for the interim WEC title.

This was a crazy back and forth battle from the outset, with Cerrone attacking with a guillotine and transitioning to a triangle choke in the opening 90 seconds and Henderson answering with takedowns and ground-and-pound over the remainder of the frame.

And it was more of the same over the next four rounds, with Henderson ultimately taking home a unanimous decision and the interim title.

While he’d turned in some quality performances in the past, this was the bout where the future UFC lightweight champion’s true potential was first on full display, as he showcased his resiliency, heart and conditioning, along with his strong wrestling and a steadily improving striking arsenal.

They’d run it back six months later, with Henderson scoring a first-round submission win and a 2-0 lead in the series, but if both men continue on their current winning ways, a third meeting between these two WEC alums isn’t out of the question.

After running through Mark Bocek and Jim Miller in his first two UFC appearances, Henderson and Clay Guida collided in a title eliminator tilt that served as the co-main event of the first ever UFC on FOX event.

“The Carpenter” was in the midst of the best run of his career, following up submission wins over Shannon Gugerty, Rafael dos Anjos and Takanori Gomi with a unanimous decision upset of Pettis five months earlier. With his frenzied style and non-stop motor, many expected Guida to give Henderson fits inside the Octagon.

Instead, “Smooth” turned in one of the best performances of his career, matching Guida’s frenetic pace while continuing to show his otherworldly submission defense and steadily improving striking en route to a unanimous decision win in a wildly entertaining contest.

Just three months after turning aside Guida, Henderson stood in the Octagon opposite lightweight champion Frankie Edgar in the main event of the UFC’s first event in Japan in more than a decade. What followed was one of the top fights of the year – a freakishly close instant classic that is still debated to this day.

With Edgar in control early, the fight seemed to pivot when Henderson landed a nasty upkick that instantly caused a stream of blood to begin flowing from the champion’s nose. Two more tight frames followed and heading into the fifth round, the fate of the lightweight strap appeared to hinge on the final five minutes of the bout.

Fittingly, the deciding round was the closest of the bout, as both fighters knew they were locked in a tight contest and needed to make their mark in the final five minutes to take home the title. Down the stretch, Edgar landed more, but Henderson connected with greater impact, closing out the bout with a heavy knee and last second takedown.

In the end, all three judges saw the fight in favor of Henderson, crowning a new UFC lightweight champion with scores of 49-46, 48-47, and 49-46 across the board. Fourteen months after feeling the sting of losing the WEC title to Pettis in the organization’s final bout, “Smooth” stood atop the division as the best lightweight in the world.

Six months after his first win over Edgar, “Smooth” and “The Answer” would meet for a second time in the main event of UFC 150 in Denver, Colorado with the champion retaining the title in another insanely close fight that can still spark arguments among close friends nearly two years after the fact.

After consecutive battles with Edgar ended in close – and some would say controversial – decisions, the champion was in dire need of a dominant win and that’s exactly what he delivered when he faced Nate Diaz at Key Arena in Seattle.

The former Ultimate Fighter winner had returned to lightweight following his brief dalliance with the welterweight division and rattled off three straight wins, submitting Takanori Gomi and Jim Miller with a one-sided beatdown of Donald Cerrone sandwiched in between to punch his ticket to a title shot.

Diaz looked primed to push the champion, but Henderson would have none of it. From the outset of the fight, it was clear that the champion was on a different level than the challenger from Stockton, California.

Utilizing his superior wrestling and a steady diet of leg kicks, Henderson wore Diaz down, the outcome of the bout decided before the championship rounds even began. It wasn’t a question of whether or not Henderson was going to win, but how and when.

Diaz remained game and refused to wilt, but the champion never backed off the gas, controlling the action for all 25 minutes. It was easily Henderson’s most dominant victory since ascending to the top of the division and one that silenced many of the critics that questioned his place as the top lightweight in the UFC.

Much like heading into his fight with Diaz, this was a bout where many believed Henderson needed to make a statement.

After dropping the lightweight title to Pettis the previous summer, the former champion returned to the cage in January, earning a split decision win over Josh “The Punk” Thomson in what UFC President Dana White described as a typical close Benson Henderson contest.

Following a pair of close, competitive rounds to begin the fight, Henderson’s conditioning and championship pedigree started to carry him. He took the third by outworking the Team Jackson-Winkeljohn product and at the beginning of the fourth, it was clear that Henderson was the fresher of the two.

A minute into the frame, “Smooth” stepped forward with a lunging right uppercut that caught Khabilov along the fence and the former champion wasted little time diving in to capitalize. He snaked his arm under the chin of his dazed opponent, secured the choke and drew a tap from Khabilov, finishing the bout at 1:16 of the fourth round.

It was a statement win for Henderson, who has made it clear that he knows his road back to title contention might be longer than normal given his history with Pettis. Given the way he’s performed since dropping the belt, Henderson has surely taken some distance off his journey and will bring himself that much closer to a chance to win back the lightweight title if he can keep his momentum going in August against Dos Anjos in Oklahoma.