"Every fight is the biggest fight in your mind, and every opponent is the toughest man you ever faced." - Drew Dober 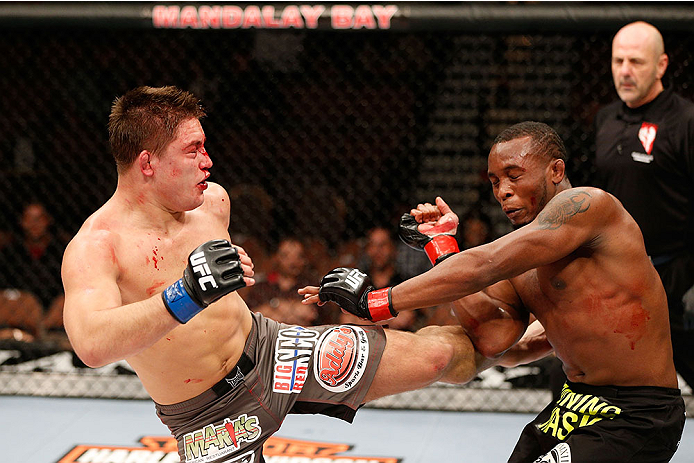 For a 25-year-old, Drew Dober has already assembled quite the resume. Fourteen pro MMA wins, nearly 10 on the amateur circuit, a couple amateur Muay Thai titles, and a spot on the UFC roster.

But there’s still one thing that’s a work in progress.

“One of my biggest problems is that I’m not patient,” he laughs. “I’m always looking for the next training session or the next this or that, and even in my fights I have a problem with not being patient. I like to engage and I like to get after it. Luckily, I have the privilege of having people in my life to tell me to relax and chill out. My coaches, friends, and family all tell me to slow down a bit.”

You could say that impatience led him to take his first UFC fight against Sean Spencer on three weeks’ notice and in the division above his optimum weight of 155 pounds, but then again, anyone would have taken that shot. And while he lost the decision to Spencer last November on the TUF 18 Finale card, what happened in that fight forced him to show patience before getting a chance to fight again.

“I broke my orbital bone in the last fight, and it was pretty rough, but it made me see things that I was lacking in my preparation as far as recovery and everything else.”

And how’s that patience thing working out?

“It’s great on my body, but mentally I need to go,” he laughs. “So there are ups and downs.”

The biggest “up” is that the injury is healed and he will be back in the Octagon this Saturday to face Germany’s Nick Hein in a UFC Fight Night bout to be aired on UFC FIGHT PASS. The fight will be his first in the Octagon at 155 pounds and his first after a training camp spent with Team Elevation in Denver, Colorado. Both are developments he couldn’t be happier about.

“It’s a huge difference,” he said. “My first fight in the UFC I took on three weeks’ notice and up a weight class against a super tough individual. This one I was given a full training camp, and it’s in my weight class, so it’s completely different. It allows me to really focus and build momentum and enthusiasm for this fight.”

As for training in the Rocky Mountain state, Nebraska’s Dober says “There’s a different style of training out there. There are plenty of training partners and coaches, and I’m taking advantage of the high altitude and the different styles. I was getting great training back home; I just needed to change things up, change the routine, and fill some holes in my game.”

In Hein, Dober will face an opponent now going though everything he did a few months ago, but elevated to an even higher level given that he’s the home country favorite fighting in Berlin. It’s got to be a lot to deal with for Hein, and Dober is hoping that could give him an edge. If it does, he’ll take it.

“You’re fighting in front of your home country and your home fans and all this hype might put some extra pressure on him,” said Dober. “He has to perform, and when you fight with that much pressure or that many expectations, you can get very tense and critical. Me going in there, I get to relax, and while I’m obviously going to be fighting my best, I’m also going out there to have fun.”

That’s a veteran talking, despite being only 25 with one UFC fight under his belt. Dober has been around though, starting his amateur career in 2007 and beginning his pro journey two years later. From there, he went through the ups, downs, and sideways of the fight game, fighting in Strikeforce, losing to Daron Cruickshank in an attempt to earn a spot in the TUF 15 house, and generally seeing a lot more than most fighters his age have. After all that, does it get any easier?

“Every fight is the biggest fight in your mind, and every opponent is the toughest man you ever faced,” he said. “You add a belt or the fact that I’m fighting in Berlin with the UFC and it adds more excitement and enthusiasm, but I don’t think it gets easier. I’m still going to have a shirtless man trying to punch me in the face.”

He laughs, and maybe the better question would be, after all he’s experienced, is he ready to stake his claim here and begin a run that will one day lead him to the top of the division?

“I’m definitely ready,” said Dober. “I don’t remember the specific time, but there was a time when I was like ‘this is what I absolutely love, this is what I’m doing, and I’m fully capable of being world champion.’ So I switched over my mentality into taking everything seriously, training professionally full-time and I’m ready. I’m ready to be in the top ten and pursue the best opponents and I’m always growing. I’m always looking to change things up and to improve. What can I learn, how can I advance my abilities? That’s why I went out there (to Colorado). There’s always something I can learn and get better at.”

Even patience. But let’s put it to the test. Drew, if (UFC matchmaker) Joe Silva presented you with the option to get on a Donald Cerrone-esque schedule and fight six times a year…