The Immortal Is Back

Matt Brown is back and more focused than ever for his return to the Octagon at UFC 245.
By Thomas Gerbasi, on Twitter: @TGerbasi • Dec. 11, 2019

It’s a Sunday evening in the middle of training camp for Matt Brown. The work’s done for the day, but there is still precious little time left for things like interviews about his UFC 245 bout with Ben Saunders. But Brown has found a window. The only problem is that while his two boys are old enough to know the pre-fight drill, his four-year-old daughter is a bit newer to the game.

“She’s playing with her Barbies,” said Brown quietly. “We’ll see how long that hangs on for.”

There were some who thought we would never see this day for Brown as a doting father, UFC veteran and gym owner. In fact, Brown was one of those people.

“I definitely did not see that,” he said. “But who does? That’s the way the world goes. I guess some people want to work a job and have kids and grow up; that definitely wasn’t on my goal list, but here we are and it’s a great thing.”

Being a responsible adult is a good thing. Yet it certainly has its moments when you wish you were young and wild without a care in the world.

No, just wondering if part of Brown’s return to the sport at the age of 38 has anything to do with recapturing something so intertwined with being a young, reckless prizefighter chasing glory with both fists.

“It’s just who I am,” he said. “I married this sport a long time ago and I’m a martial artist for life. I’m a lifer. And this is what I’m gonna do until the day that I die.”

His gym in Ohio will allow him to teach the sport and be a part of it for as long as he wants to, but he also knows that being an active participant at the highest level of the game isn’t a lifelong thing. That doesn’t mean he really wanted to give it up after knocking out Diego Sanchez in his most recent bout in November 2017.

“I think I kinda knew that I’d be coming back; I probably should have just worded it as a temporary retirement,” he laughs. “I needed to stop for a little while, but I didn’t imagine myself coming back at 38 years old. I was 36 at the time and 38 seemed old, just like 40 seems old now (Laughs) and two years seems far away. So I did officially retire. I just think somewhere deep inside I knew it wasn’t real, but I had to do it to make it real.”

UFC 245: Fight By Fight Preview | Mike Perry Thinks His Job Is On The Line | Top Finishes From The Fighters Of UFC 245

In April 2018, the retirement was already supposed to be over, as he was scheduled for a clash with Carlos Condit. A torn ACL put an end to that comeback, and it might have been a sign that retirement was a good idea for the 39-fight veteran, but Brown is just not built that way. Now he had something to prove, and the time off to get healed taught him that maybe blitzing every training session every day wasn’t the way to go. Today, he trains smarter, not harder, and as cliché as that saying might be, it’s worked for him.

“I might feel better now than I have in the past five years,” said Brown, whose meeting with Saunders is one of the most anticipated on a stacked UFC 245 card, primarily because “The Immortal” and “Killa B” are two old school battlers not interested in point fighting. As for it being the perfect fight for Brown’s return, he’s not so sure.

Did Brown just say “title fight?” So that’s still in his mind more than 11 years after his UFC debut win over Matt Arroyo in 2008?

“Why else would you do it if you don’t think you could get there?” he asks. “I absolutely believe I have those abilities and it’s just a matter of putting it all together at the right place and the right time.”

Brown, a big fan of all combat sports, knows that in boxing, champions are often given optional title defenses against anyone in the top 15. It’s not that way in the UFC, where the title fights are waged against the number one contender nearly every time. That’s a good thing, but does the Columbus, Ohio product wish that there was an option for him to get a shot at the belt without being a number one contender? He does, and for the record, should somebody in Saturday’s main event not be able to make it to the Octagon, he is offering his services to step in.

“I was actually thinking the other day, what if (Colby) Covington or (Kamaru) Usman got hurt and they needed someone the day of?” he said. “What an opportunity that would be. I’d be on weight, ready to go, sharp, and these things happen, like TJ (Dillashaw) fighting Joe Soto (for the bantamweight title in 2014). This is a crazy sport and you never know what’s gonna happen, so you’ve got to be ready all the time. My whole goal is to test myself against the best; Saunders just happens to be there this time.” 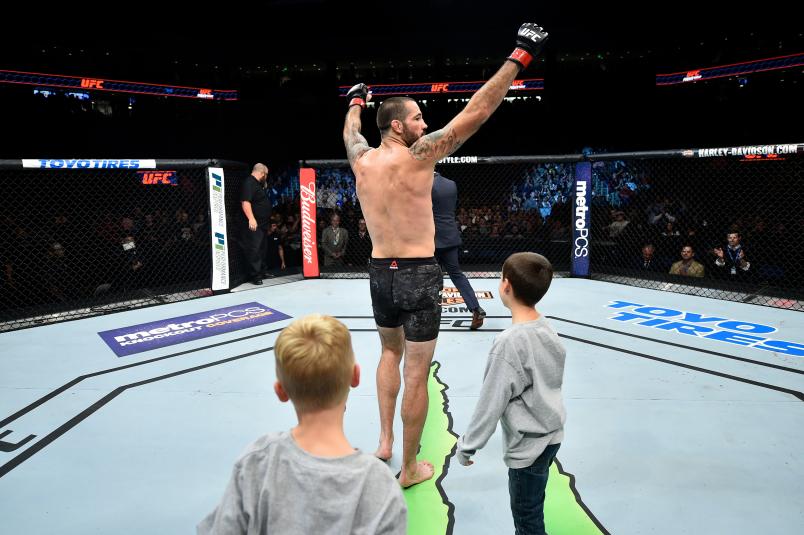 Matt Brown celebrates with his children after defeating Diego Sanchez in their welterweight bout during the UFC Fight Night event inside the Ted Constant Convention Center on November 11, 2017 in Norfolk, Virginia. Matt Brown won by KO. (Photo by Brandon

At this moment, an impromptu practice is starting for Brown’s sons, who are more than happy that dad is returning to the Octagon.

“They love it, and that’s a huge part of having to come back, too,” he said. “Every day, they’re like, ‘When are you fighting in the UFC again?’ Especially when they’re at this age where they’re really understanding what it is. They’re going to school and their teachers are talking about it and their friends are talking about it. They’re getting it now. So it’s a new inspiration. My sons are over here throwing wheel kicks right now and working on their shadowboxing. (Laughs) They love it.”

Time to let Matt Brown be a dad again. But this Saturday, it’s back to work.