"I’m not maybe the most technical fighter with the most advanced techniques, but I do my best and I fight with my heart." - Ilir Latifi 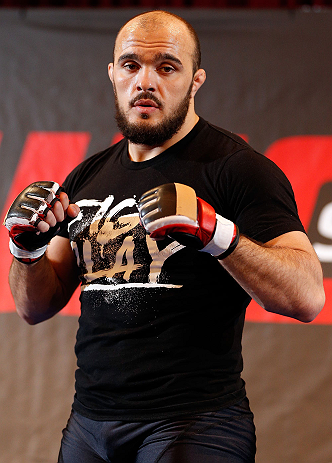 The old adage is that luck is when talent meets opportunity. Malmo, Sweden’s Ilir Latifi has proven over the course of an 11 fight mixed martial arts career that he has talent. On April 2, he got his opportunity.

On Saturday night, the light heavyweight gets to see if his luck is good or bad.

From the good end of things, Latifi got a once in a lifetime opportunity when his countryman and training partner, Alexander Gustafsson, wasn’t cleared to fight in the UFC on FUEL TV 9 main event against Gegard Mousasi this Saturday. When word got out that “The Mauler” had suffered a cut during his last week of training, Latifi was in the gym, not preparing for a fight, but doing his daily routine to keep in shape.

“I didn’t know if he was going to fight or if the fight was going to be cancelled,” said Latifi of the time after he learned of Gustafsson’s injury. “In the beginning I wasn’t sure, but then after a while, people were saying more and more that he wasn’t going to fight and I saw that nobody in the UFC was stepping in to take the fight. Then I just sent a message out that I can take the fight and that I’ll do my best and I’ll fight him (Mousasi).”

Tuesday afternoon US time, Gustafsson was ruled out of the fight. By that night, Latifi was in. Sure, Latifi is an underdog against the highly-touted Mousasi, but with a win, he would immediately stamp himself as a contender in the 205-pound weight class. That’s real fighter stuff right there.

“It’s just the way that I grew up,” said the 29-year-old. “During my life I didn’t have many chances, so when I get the chance, I gotta take it. If you want to make big wins, you gotta take big risks too. I know Mousasi is a great fighter, and everybody’s saying that he’s the best and all that, but I know I can do this fight.”

8-2 with 1 no contest as a pro, Latifi is a former member of the Swedish National wrestling team, he has finished six of his eight victories, and he’s currently on a three fight winning streak. His resume doesn’t match Mousasi’s, but his style may certainly give the veteran problems, and when asked about his style, it’s clear that he’s showing up on Saturday to fight.

“I have a wrestling background, so I like the takedowns and the explosiveness, and I like to brawl,” said Latifi. “I’m not maybe the most technical fighter with the most advanced techniques, but I do my best and I fight with my heart.”

About the only problem we can see is that the Octagon hasn’t been reinforced for a fighter who broke the ring in his first fight, resulting in the no contest on his record.

“I don’t think that’s gonna happen,” he said. “Hopefully not. If it held for the big guys, Brock (Lesnar) and these guys, I think it will hold for me too.”