Ilir Latifi: This is Just the Beginning

"After that experience, everything feels much easier. I’m coming into a fight prepared, I had a training camp, I’m cutting weight as you should, and it feels more relaxed." - Ilir Latifi 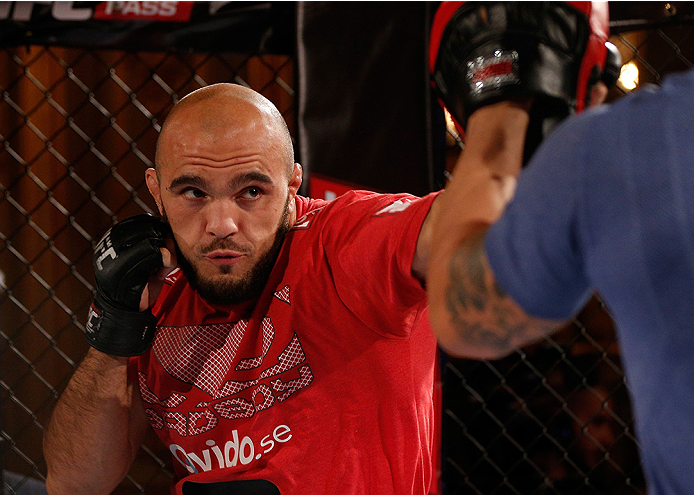 Things don’t always turn out well for fighters who do what Ilir Latifi did back in April of 2013. Of course there are exceptions, but when you make your UFC debut on less than a week’s notice against one of the best fighters in your division, you not only lose the fight more often than not, but the rest of your career usually won’t reach those heights again.

Latifi is one of those exceptions. Yes, he accepted a short notice fight with Gegard Mousasi last year, replacing his teammate Alexander Gustafsson in the light heavyweight bout, and yes, he lost the fight, albeit by decision. But what happened afterward has shown the native of Malmo, Sweden to be a legitimate prospect whose career is one loaded with potential, not a cautionary tale.

Sporting back-to-back wins, both finished in the first round, since the Mousasi fight, the 31-year-old Latifi is now a star in his homeland, one of the impressive Swedish contingent that stacks this weekend’s UFC Fight Night card in Stockholm. Not bad for a former unknown hoping to one day make a name for himself in the Octagon.

“It’s a lot different now,” Latifi, who faces newcomer Jan Blachowicz on Saturday, said. “Now, ordinary people are talking about MMA, not just people who follow MMA. People who have never watched MMA before, they recognize the fighters and the stuff going on, so it’s becoming more and more mainstream. For most, you don’t even have to tell people what you do, because they already recognize you from TV or the newspapers. I’m comfortable with that and it’s something that’s slowly grown. I appreciate all the hype around MMA and, in a way, all the hard work is starting to pay off.”

Public notoriety isn’t the only thing that has changed for Latifi in the last 18 months. After tearing through Cyrille Diabate and Chris Dempsey in his most recent bouts, Latifi goes into the Blachowicz fight with one of the most coveted – and underrated - perks in this sport.

“I’m coming into the fight with a full training camp, so a lot of things are different,” Latifi said, referring back to the Mousasi bout, where he was in what some would call a life-altering fight, but that could have also been looked at as a career-killer. Latifi was going to get a second UFC shot regardless of what happened in the fight, which also took place in Stockholm, but if he got blown out in 30 seconds by Mousasi, he would have been forever branded as a fighter not ready for prime time. But Latifi performed well, went 15 minutes with his opponent, and cemented his status as a fighter to watch. His next two guaranteed that you would be watching.

“After that experience, everything feels much easier,” he said. “I’m coming into a fight prepared, I had a training camp, I’m cutting weight as you should, and it feels more relaxed.”

In Poland’s Blachowicz, Latifi will face a 17-3 foe with a five-fight winning streak that includes four wins over UFC vets Goran Reljic, Houston Alexander, Mario Miranda, and Sokoudjou. Latifi knows what he’s in for, and he expects the fans will enjoy the scrap.

“Here in Europe, he (Blachowicz) was ranked number one for a while, and he’s a pretty experienced fighter,” the 31-year-old said. “He has a lot of fights against good fighters and has a good ground game, so it’s a good challenge. It’s gonna be a good fight.”

A good fight at home in Sweden with the opportunity to win his third straight and continue his ascent in the light heavyweight division. That’s all good stuff for Latifi, who would like to return to the United States for the first time since 2011 and give Stateside fans a taste of “The Sledgehammer,” all as part of his bigger plan to reach the top of the sport’s glamour division.

“I’m taking one fight at a time, and I’m focusing on this fight now and let’s see what happens after,” he said. “But I want to fight in the U.S. after and climb up the ladder. Of course, I have my goal, and that’s reaching the top.”

“I’m happy that I’m starting to show off my skills and what I’m able to do, but there’s a lot more to come,” Latifi said. “This is just the beginning.”