Ilia Topuria Is Ready To Step Into Title Contention

Following Three Consecutive Knockout Wins, Ilia Topuria Believes A Win At UFC 282 Sets Him On A Path Toward Gold In 2023
By Zac Pacleb, on Twitter @ZacPacleb • Dec. 8, 2022

Calling a year in which you earn your first performance bonus and third consecutive knockout victory a “tough one” seems strange, but that’s where Ilia Topuria is at the moment. The 25-year-old German-born Georgian who fights out of Spain was scheduled to take on all-action veteran Edson Barboza in October. Barboza was forced to bow out of the matchup, however, so Topuria is now set for just his second fight of the year at UFC 282: Błachowicz vs Ankalaev, where he fights fellow featherweight riser Bryce Mitchell.

It's a quality matchup between a couple of the finest fresh talents at 145 pounds, although Mitchell is a bit more battle-tested coming off an impressive victory over Barboza earlier this year. While it’s a pairing that serves Topuria well should he get his hand raised, it didn’t add any extra zest to his training camp.

Undefeated through 12 professional fights, Topuria entered the UFC known more for his grappling prowess. In eight fights on the regional scene, all but one victory came via submission. However, something shifted once he arrived at the mixed martial arts leader. Damon Jackson, Ryan Hall and Jai Herbert all suffered stoppage losses quite literally to Topuria’s hands. 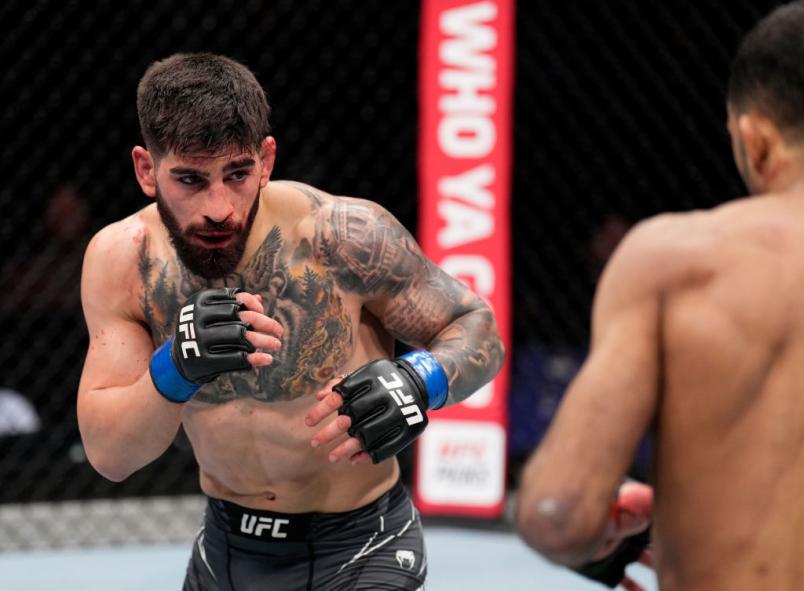 Ilia Topuria of Spain circles Jai Herbert of England in a lightweight fight during the UFC Fight Night event at O2 Arena on March 19, 2022 in London, England. (Photo by Chris Unger/Zuffa LLC)

Topuria said those results are less about his quality of striking – which he says has always been strong but improving – and more so about the gameplan he brought to the fight. Additionally, if anyone has any sort of doubts about his grappling, he points to the fight with Hall, which featured Topuria evading the various leg attacks from the jiu jitsu wizard.

Mitchell does represent Topuria’s first crack at the Top 10, but he isn’t putting any more expectation or pressure on himself because of that.

“Every fight is my biggest test,” he said. “It doesn’t matter if my opponent is Bryce Mitchell or someone else. Every fight is the most important fight of my life.”

His own mentality aside, Mitchell presents an intriguing puzzle to Topuria. He is a marauding grappler with an intelligent aggression about him when he pursues submissions. Mitchell chains those attempts together well while keeping control, so the wrestling exchanges will prove crucial.

That said, Topuria’s confidence is perhaps one of his best traits. Whether he is pressing the action or fighting on the back foot, he never wavers in his ability to work a problem out and find a path to victory as he did after a tough first round against Herbert.

“(Mitchell) is a skilled fighter on the ground, but that’s it,” Topuria said. “People think it’s a tough matchup for me, but (only) people think like this. Not me. I don’t think so. I think it’s a normal fight for me. He’s No. 9 in the rankings. He’s a tough guy, but I’m going to put him to sleep in the first round.”

As 2022 reaches its conclusion, Topuria sees big things ahead in 2023.

After beating Mitchell, he expects a Top 5 matchup and then a title shot to follow as his eyes set on Alexander Volkanovski.

First comes Mitchell, however. The fight is Topuria’s third in Vegas and second on a pay-per-view event. He picked up first-round knockouts in each outing and expects more of the same come December 10.

“I’m better anywhere the fight takes place,” Topuria said. “I’m better than him. Somebody is going to lose, and it’s not going to be me.”