Inspired By His Family And The Young Fighters He Trains, Heavyweight Pushes Forward
By Thomas Gerbasi, on Twitter: @TGerbasi • Oct. 21, 2021

After Ike Villanueva suffered a loss to Marcin Prachnio in June, the 37-year-old didn’t dwell on the defeat, or the disappointment attached to it.

“Wash my hands, wash my face and go back to work,” he said. “I've been down plenty of times in life, and you get your ass back up. Don't dwell on the past, keep moving forward. I know I'm making my dad proud.”

Big Tom Villanueva wouldn’t stand for anything less. Neither would his son, who returns to the Octagon this Saturday to face Romania’s Nicolae Negumereanu in Las Vegas. That doesn’t mean it isn’t nice to get a little encouragement now and then, and he got just that from the kids he’s coached over the years.

Sometimes that’s all he needs to head to the gym for another day of grueling work after some time checking out Cocomelon with his daughter Gigi. But once there, it’s all business for a fighter who embraces the road less traveled. For him, that’s what separates the haves from the have nots in this business, and if you’re wondering what that’s like, he says you can tell from the time you open the door to the gym.

Does that mean no smoothie bar?

“You want that, you keep going north,” laughs Houston’s Villanueva. “You come in our gym, it's in there, you smell it. You know it's gonna suck. Yeah, there's no smoothie bar there.

“As a fighter, you get spoiled if you get treatment like that,” he explains. “You come into Main Street Boxing, you go upstairs and open the door, you feel the heat. Then you look at some of the fighters and you see the hunger in their eyes, you see that fire. That says, ‘I come from nothing and I'm trying to make it.’ Now I don't have to fight, but I do it, because it's like I'm living my dad's dream that he couldn't do because he had kids and a family. So I had the opportunity to do it, and that's what motivates me to keep pushing.” 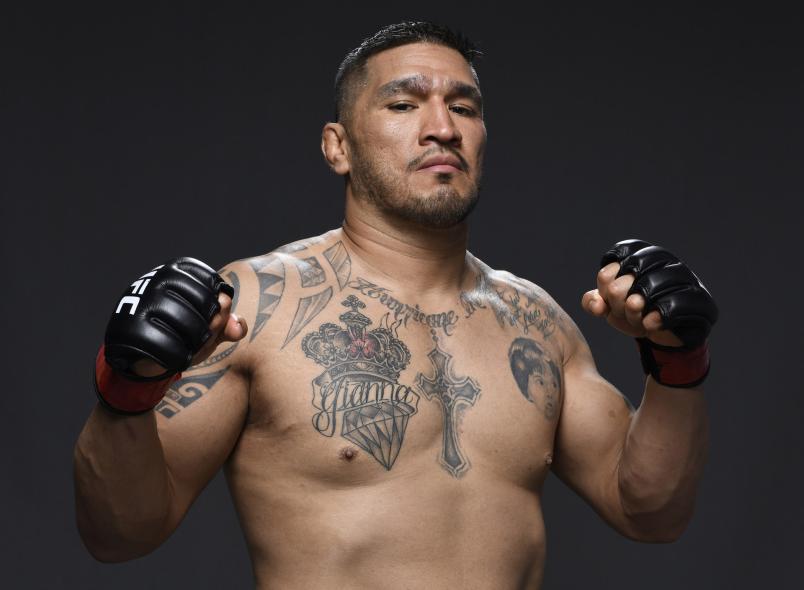 Ike Villanueva poses for a portrait after his victory during the UFC Fight Night event at Etihad Arena on UFC Fight Island on January 20, 2021 in Abu Dhabi, United Arab Emirates. (Photo by Mike Roach/Zuffa LLC)

A pro since 2008, Villanueva has been paying his dues since the start, and he’s got the bumps and bruises and the 18-12 record to prove it. But now that he’s reached the top of the sport in the UFC, the light heavyweight veteran says that he wouldn’t change a thing because that upbringing in the sport sets him apart from many of his peers.

“These kids are spoiled nowadays,” he said. “They're spoiled and they've got everything. Back then, we didn't have nothing. ‘Hey man, I got this guy.’ ‘When am I fighting? You're fighting in Frisco, fighting in Dallas, fighting in Amarillo.’ We didn't have options. You gotta go fight. There was no, hey, I gotta cherry pick my record and get to 10-0 and then we can go take a tough fight.”

Villanueva lost his pro debut. Six fights in and he was 3-3, having just lost a bout to future UFC fighter Cody Donovan. This was all while working a full-time job and raising a family.

A participation trophy isn’t enough for guys like Villanueva. So when the wins came, he moved forward, when the losses happened, he didn’t let them take him from his path. And like Tom Villanueva before him, Ike’s goal was simple, to give his kids a better shot than what he had.

“That's the blue-collar dream,” he said. “My dad and his family, when they came down here to America, it was for a better life for our kids, and I always want my son to do better than me. If he don't have to get punched and hit in the head for a living, go and do that route. He made me proud, and I feel like I'm almost there. My son can do that, and I've got my stepson, he's getting looks at college, so if they can get these scholarships, it's awesome. It's the American dream. Dream big.”

"Much love to him getting here but I'm drawing that line Saturday I'm here to do work."

Ike Villanueva (@Hurricane_UFC) talks about bouncing back after a tough loss, his mindset heading into #UFCVegas41 and the advice he gives to his children 🔊⬆️ pic.twitter.com/1aNZvVkgSY

Ike’s boys are both going to be in college, soon, and dad couldn’t be prouder. It’s what he’s been fighting for all these years. But the fight isn’t over, and that’s something he reminds the up and comers every time he steps into the gym.

“I got all these young kids that are pushing me and that's what it's about,” Villanueva said. “We need these young, hungry fighters. I talk to them a little bit, try to trash talk them to get them to try and kick my ass. Because if I don't talk to them, they're gonna be scared of me. So I talk to them and really try to push them. And lately, it's been working. I'm thankful for 'em, and they're taking a beating in the gym, but they're coming back and I'm very thankful for my team helping me out.”

On Saturday, he will strap on the gloves for the 31st time as a professional. Some would say his back is against the wall as he enters the Negumereanu bout with a 1-3 Octagon slate. But he would say his back’s always been against the wall, and when that’s the case, fighters fight. That’s all he’s concerned with. The outside noise? That’s been around for as long as he’s been in the punch for pay business, and that’s all it is – noise.

“They always said I wouldn't make it to the UFC, but look at me - I'm here, I'm on my second contract, so I did something,” Villanueva said. “But I'm not done. I'm gonna keep pushing, keep grinding and let my story keep going. The doubters' job is to doubt you and my job is to keep fighting, and you know that when I show up to fight, I'm coming to bring it.”