Ike Villanueva's UFC debut didn't go his way, but he will continue chasing his dreams at UFC Vegas 7.
By Thomas Gerbasi, on Twitter: @TGerbasi • Aug. 20, 2020

It takes over 20 hours to drive from Houston to Las Vegas, but Ike Villanueva enjoyed getting some time to reflect on where he’s been and where he’s going.

“There's a lot of thinking on the drive from Texas to Vegas, and I cleared my mind,” he said.

The Houston native was just removed from his first loss since 2017, a May defeat at the hands of Chase Sherman in his UFC debut, and while the short-notice bout cemented the thought in his mind that he belonged at the elite level of MMA, he also knew he had some changes to make if he wanted to stay there.

“Some guys get all depressed after they lose,” Villanueva said. “I looked at my coach and said, ‘We got this. I belong here and I'm ready for it.’ As soon as I got back to Houston, I got to work. I told (UFC matchmaker) Mick Maynard August I'll be ready and here I am.”

This Saturday, Villanueva returns to the Octagon and to the light heavyweight division when he faces short-notice replacement Jordan Wright in the city that has now become a second home, the one he drove a long way to get to.

“Vegas is the hotspot,” said Villanueva, who now trains with the Xtreme Couture squad. “I've been to Cali and trained with some great people, but I talked to my manager, Jason House, and he's like, 'XC is the place.' I really wanted to do it. Coach Eric Nicksick is a badass. I did my research on all the guys there, and I fit in real well. I'm liking it so far, and it's kind of like being reborn. That's the awesome part about making this change, and I still have my team back home when I do go back and that's my family.”

Villanueva says the last time he felt this good before a fight was nearly a year ago, when he knocked out UFC vet Roger Narvaez in 28 seconds. Four months later he issued a similar fate to another former member of the UFC roster in Rashad Coulter. After 11 years in the sport, a stint filled with ups and downs as he juggled family life and a day job as a CNC machinist, the “Hurricane” was more than ready for the call to the big show. But it didn’t come until the world was in the middle of a pandemic and Sherman needed an opponent.

“That was just macho machismo hard-headedness,” he laughs when it comes to his decision to take the short-notice assignment. “I don't back down for nothing. UFC called me, I ain't saying no. And in the back of my mind, I said everybody's got a puncher's chance. I was working 60 hours a week, eating tacos for lunch, and you get the phone call. We didn't expect that with everything we were going through. But when I got done with that fight, I learned from it.”

The main takeaway was, as Clint Eastwood once said, sometimes, “Tough ain’t enough.” The 36-year-old Texan was smart enough to realize that he needed to put himself in the best possible position to evolve his game to compete with the best 205-pounders in the world, and despite his wife being eight months pregnant with their daughter Gigi, she gave him the blessing to chase his dream, something his ex-wife wasn’t on board with. 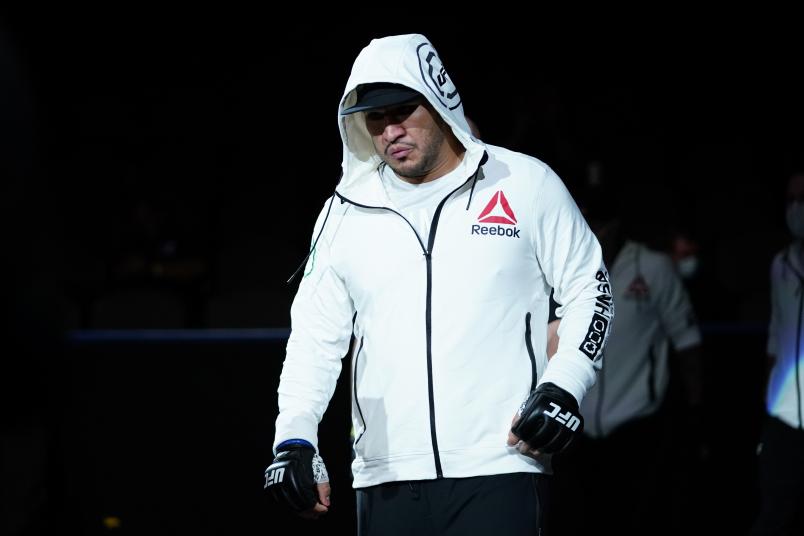 Ike Villanueva walks to the Octagon prior to his heavyweight bout against Chase Sherman during the UFC Fight Night Event at VyStar Veterans Memorial Arena on May 13, 2020 in Jacksonville, Florida. (Photo by Cooper Neill/Zuffa LLC via Getty Images)

“My wife's my main supporter,” said Villanueva. “We sat down and she's like, 'Baby, just go.' My wife's eight months pregnant and this was big for me to come out here by myself. I drove out here and it's one of those things where I'm glad I had my wife and family back home to support me. It's still hard and I'm still adjusting, but I look forward to my future. This is what it's about.”

Villanueva recalls his late father, Tom, a hard-working man whose lessons are still being felt in his son today.

“This is just me; it's who my dad raised,” he said. “I was raised by one of the baddest, may he rest in peace. But he showed me that blue-collar, hard lifestyle. He showed me that you work hard. My dad didn't open his business until he was 40 years old, but during that time, so many people told him, 'You're not gonna do it, you're not gonna do it.' But he finally did it. he didn't stop pushing. That's something that motivates me. I was married once before and my ex-wife told me one time, 'Why are you dreaming? Dreams don't come true.' And now I sit back and I laugh because she's eating those words right now. As long as you work hard for something, don't let nobody tell you that you can't do it.”

He's living proof. And while he might be in Las Vegas now, he feels like all of Houston will be with him on fight night.

“I'm blue-collar,” Villanueva explains. “There's no BS in me. We're going through a hard time back home with this pandemic and I got a text from one of my bosses and he's like, 'Man, you'e doing it for all of us. You're chasing your dream.' I stepped away from that (job) to focus full-time as a fighter. But they still text me, still show me love, and that's what feeds me and motivates me because those guys are struggling back at home but they're excited that one of us, one of the blue-collar guys is doing something, and that's awesome. It's why I keep pushing.”