Igor Araujo: Back to Brasilia

"I like to be focused on my next fight, but I’m pretty sure that if I perform well in this one and I get the W, big things will come for me in this organization and I can’t wait to get these big things." - Igor Araujo 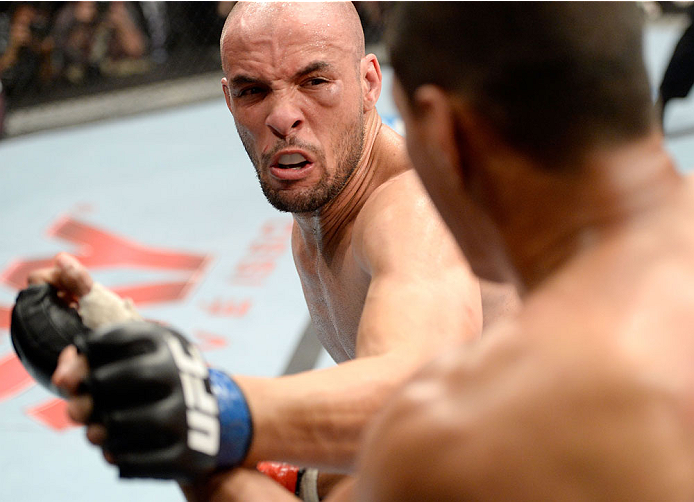 In another place or time, UFC welterweight Igor Araujo may have been writing about the fights and not participating in them. But when circumstances forced him to choose between his journalism studies and a career as a mixed martial artist, he chose to fight, even though that wasn’t the most lucrative business either at the time.

“My first fight I got 70 dollars for the fight,” Araujo recalled. “The second fight I got 150 dollars in a tournament for a no rules fight. It was hard to live like that.”

That’s for sure. But it was even harder to juggle training and fighting with school, and though he walked away from journalism, the trade of his father, he still holds a place in his heart for it.

“My father was a very good journalist in Brasilia,” he said. “I used to go to the place where he worked and I saw the cameras and the radio, and I started studying that but in America you are lucky because you can do both things. In Brazil you can’t do both things. You train or you go to school. I was in school the same time I was training, so my training was 10 in the morning, and my school was 10 too, so it was hard to pick because I was not working besides that. But I love journalism and I dream about writing a book. I have this in my blood. So to be a journalist is not something that I forgot. I really want to try to do something in the future.”

It will likely be a story worth reading, but for now, the 33-year-old has more pressing business in his fight career, namely a Saturday bout in his hometown of Brasilia against New Jersey’s George Sullivan.

“I was dreaming about fighting in Brazil, and right now I’m fighting in Brasilia, my hometown, the place where I was born,” he said. “I lived there for 15, 16 years and I have all my childhood friends and my family there. For sure, it is something special, and I can tell you now that this fight’s the biggest fight of my life.”

There’s something about a homecoming bout, and while much of the Brazilian portion of the UFC roster has had that opportunity to compete in or around their hometowns, this is a first for Araujo, who will be in Brasilia for the first time in two years, and even then it was just for one day to visit friends. This time, he will see family and friends and show them what he has been doing all these years, first while living in Switzerland and now as a member of the Jackson’s MMA team in Albuquerque.

“I’ve been working hard in Albuquerque,” Araujo, whose wife and three children stay in Geneva while he trains, said. “I’m away from my family, giving up a normal life, and it’s for some reason. I train three times a day, go home, internet, video games. I’m about to get crazy here. (Laughs)”

The reasons for the sacrifices include taking care of his family, but also to one day be the top 170-pounder on the planet. At 25-6 with 1 NC, the former Ultimate Fighter 16 quarterfinalist’s time to strike is now, and though he’s unbeaten in two UFC fights, beating Ildemar Alcantara and Danny Mitchell, he hasn’t delivered that signature performance yet, something he hopes to remedy against the hard-hitting Sullivan.

“He’s a powerful guy, a big 170, but when you have 32 fights, nothing is new for you,” Araujo said. “I fought tough dudes like him, so it’s going to be one more tough fight in my life, but I’m ready for anybody. When you know yourself well, it doesn’t matter what the guy will do. You do your thing and that’s it.”

And he dismisses any idea that fighting at home will be a distraction for him.

“I fought all over the world,” he said. “I fought in Russia, I fought in Italy, everywhere. So nothing can distract me because I know my focus is on the fight. I want to win this fight and to show them a boy from the city’s there. I know they’re going to be very happy with the result.”

With the kind of result he wants, namely a definitive finish, Araujo will have made a statement, but it will be with his actions, not his words, and that’s the way he likes to operate.

“I don’t like to tell people what I want in the UFC because I see a lot of newcomers saying they want to go for the belt and they want to fight this and they want to fight that,” Araujo said. “Me, I like to be focused on my next fight, but I’m pretty sure that if I perform well in this one and I get the W, big things will come for me in this organization and I can’t wait to get these big things. My plan is to go really far in the UFC, and I know that I can do it.”

If that plan works, maybe he’ll be coming back to Brasilia the next time with a belt in his suitcase. That’s okay with him.

“You can never sit on your results and be happy there,” he said. “You have to always be looking up at the next step.”