Lightweights Collide In The UFC's Return To Canada
Mar. 20, 2019 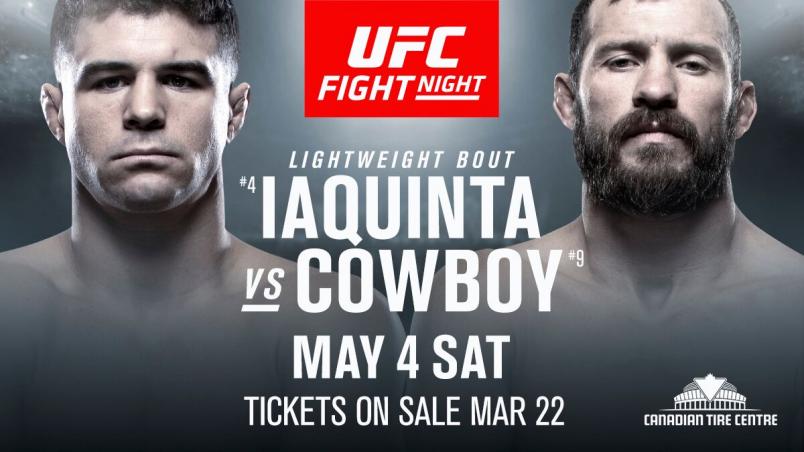 Ottawa, Canada – UFC® will return to Ottawa with a thrilling lightweight battle between No. 4 ranked contender Al Iaquinta and No. 9 Donald Cerrone. In a clash of middleweight contenders, No. 8 ranked Derek Brunson looks to re-assert himself in the title picture against No. 14 and Ontario native Elias Theodorou.

UFC FIGHT NIGHT ON ESPN+®: IAQUINTA vs. COWBOY will stream live from Canadian Tire Centre exclusively on ESPN+ at 8 p.m. ET on Saturday, May 4 with prelims kicking off on ESPN+ at 5 p.m. ET. All UFC live events on ESPN+ will also be available in English and Spanish.

A talented grappler with knockout power, Iaquinta (14-4-1, fighting out of Wantagh, N.Y.) returned to action in December with a spectacular win over Kevin Lee. During his UFC stint he’s picked up impressive wins against Diego Sanchez, Jorge Masvidal, Joe Lauzon and Ross Pearson. He now aims to build on his momentum with a victory over one of the biggest names in MMA.

A perennial favorite who’s equally dangerous striking as he is on the mat, Cerrone (35-11 1NC, fighting out of Albuquerque, N.M.) stormed back into the lightweight division with a show-stealing victory over Alexander Hernandez. He also holds highlight-reel victories against Edson Barboza, Mike Perry, Matt Brown and Rick Story. Cerrone is now ready to continue his climb back up the 155-pound ranks.

A NCAA Division II wrestler with heavy hands, Brunson (18-7, fighting out of Wilmington, N.C.) has fought the who’s who of the 185-pound division. During his UFC run, he’s delivered spectacular knockout wins against former light heavyweight champion Lyoto Machida, Uriah Hall, Sam Alvey and Ed Herman. He now looks to make a statement on enemy territory against a rising contender.

Winner of The Ultimate Fighter Nations: Canada vs. Australia, Theodorou (17-2, fighting out of Toronto, Canada) aims to crack the middleweight top 10. An unorthodox and diverse fighter, he has picked up hard-fought victories over Eryk Anders, Trevor Smith, Cezar Ferreira and Sam Alvey. He’s now set to stake his claim as a title contender against one of the division’s most battle-tested competitors.

-The Ultimate Fighter winner Brad Katona (9-0, fighting out of Winnipeg, Canada) aims to remain undefeated when he takes on gritty Merab Dvalishvili (8-3, fighting out of Long Island, N.Y. by way of Tbilisi, Georgia)

-Nordine Taleb (14-6, fighting out of Montreal, Canada) takes on fellow welterweight KO artist Siyar Bahadurzada (23-7, fighting out of Amsterdam, The Netherlands by way of Kabul, Afghanistan)

Visit UFC.com for information and content to support your UFC coverage. Please click here to apply for the event.

Tickets for UFC FIGHT NIGHT ON ESPN+®: IAQUINTA vs. COWBOY go on sale Friday, March 22 at 10 a.m. ET and are available for purchase online at www.ticketmaster.ca. Ticket sales are limited to eight (8) per person.

UFC Fight Club® members will have the opportunity to purchase tickets Wednesday, March 20 at 10 a.m. ET via the website www.ufcfightclub.com. A special Internet ticket pre-sale will be available to UFC newsletter subscribers Thursday, March 21 starting at 10 a.m. ET. To access this presale, users must register for the UFC newsletter through UFC.com.