Iaquinta reminded of how much he loves MMA 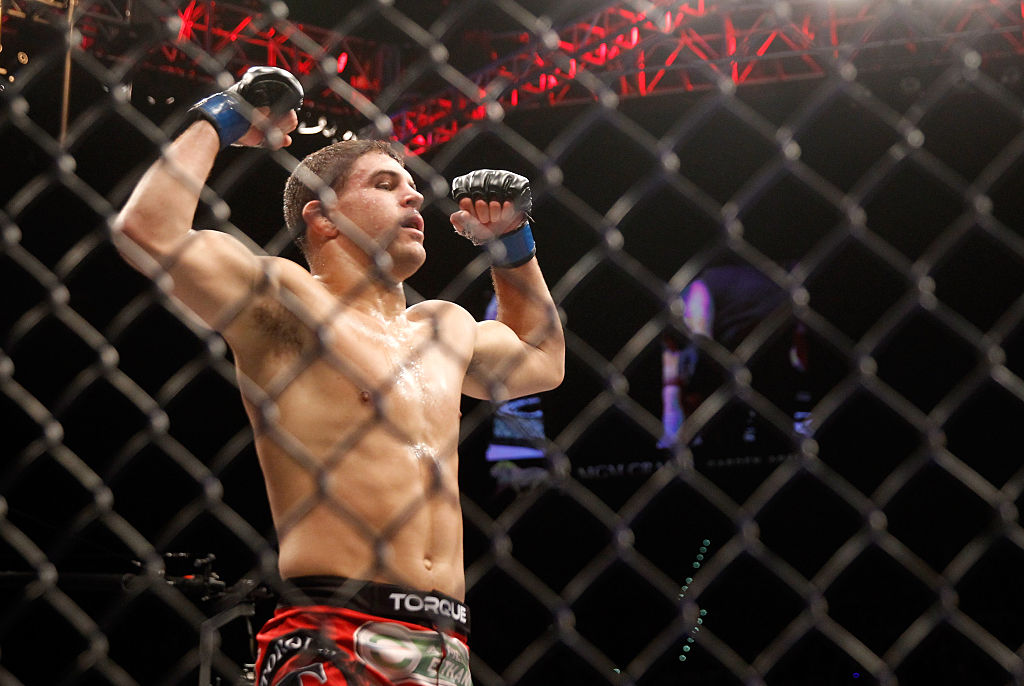 Al Iaquinta celebrates after defeating Joe Lauzon in their lightweight bout during UFC 183 on January 31, 2015 in Las Vegas, NV. Iaquinta won with a second-round TKO. (Photo by Steve Marcus/Getty Images)" align="center" /> Al Iaquinta remembers UFC 53 like it was yesterday.

“I went to Atlantic City, I watched these guys fight and I looked up the guys that fought hard,” said the Long Islander, who recalled being 18 and watching his future coach Matt Serra escape a Karo Parisyan armbar and Rich Franklin land a combination that would lead him to a win over Evan Tanner that earned him the UFC middleweight title.

“It looked so much different than it looked on TV,” he said. “I was just such a fan of that. You could tell these guys put the hard work in, the mentality that goes into it, the essence of the sport, that’s what I love about it. One guy can have every advantage in size and reach and athleticism, but for some reason, that other guy gets his hand raised.”

A little less than four years later, Iaquinta was making his pro MMA debut and he started getting his hand raised on a regular basis, eventually earning a spot on The Ultimate Fighter 15. He won four fights on TUF to make it to the season finale, and while he lost that bout to Michael Chiesa, his spot as a star on the rise in the UFC was secure.

Iaquinta did his part on fight night, following up the Chiesa bout with wins in seven of his next eight bouts, defeating the likes of Kevin Lee, Ross Pearson, Joe Lauzon and Jorge Masvidal. But injuries and battles with the UFC left him feeling like maybe this wasn’t going to be his ultimate path, and after his win over Masvidal in April 2015, he was on the sidelines for two years.

He returned for a 98-second knockout of Diego Sanchez last April, but with his body still not feeling a hundred percent and a new career taking off, “Raging” Al was rapidly morphing into “Real Estate” Al. For a while, he was fine with the idea that he would never see his promising fight career to its conclusion, but beating Sanchez had him wondering “what if” again.

“The last fight put that question back in my head, but other than that, I was a hundred percent immersed in real estate and within a couple years I think I would have been number ten in the world as a real estate agent and on my way to being number one,” Iaquinta said. “It’s a matter of finding something that you like and that you’re good at and immersing yourself in it. First it was wrestling, then it was fighting, and it might still be real estate. But when I put my mind to something, I block everything else out. There’s nothing else but becoming the best. I put blinders on and I go forward.”

On Saturday night, Iaquinta will be in the Octagon for the first time since the Sanchez bout. He’s on the main card against Paul Felder, he settled his differences with the UFC, and he’s fighting in his home state of New York for the first time. All great things for the 30-year-old, but if you ask him, the best part of all of this is feeling a hundred percent again.

“My whole team is blown away that I’ve been able to train like I have for this fight,” he said. “It’s like three and a half, four years ago. I can’t put my finger on it, but I never thought I would be able to go through a full three or four-round sparring session and then feel good enough to train again the next day. I knew I could get through it and be in shape for it, but then the next day I’d be in pain.”

The eight-week camp for Iaquinta has been a revelation and a reminder of how much he still loves the sport.

“If nothing else, this training camp has opened my eyes that I finally can get on the mat, I can learn new techniques, I can further myself in martial arts and not just get in shape and go in there and fight,” Iaquinta said. “I haven’t been myself for the last couple years. You look at Matt Serra and I don’t think he can live without rolling. And I was at that point where it was hard for me to even watch a jiu-jitsu practice, knowing that I couldn’t get on the mat and knowing that one wrong turn would screw up my knee more. It was definitely a frustrating period of my life.”

Now he can just fight, something he never thought he would be able to say again.

“I’m happy that now there’s no pressure,” he said. “I can just go out and have fun.”

In Brooklyn, New York. The only New Yorker on UFC 223. And he’s going to hear it from the fans who stuck by him through it all.

“It’s awesome,” Iaquinta said. “I’ve gotten so much great feedback, people messaging me on social media, telling me how much they respect me. I think they understand me. I’m in a good spot right now and I’m looking forward to it. It’s gonna be a good night.”