Iaquinta Making Up For Lost Time

"We know we train hard. We don’t gotta tell everybody how great we are - we’re just going to go in there and show you." - Al Iaquinta 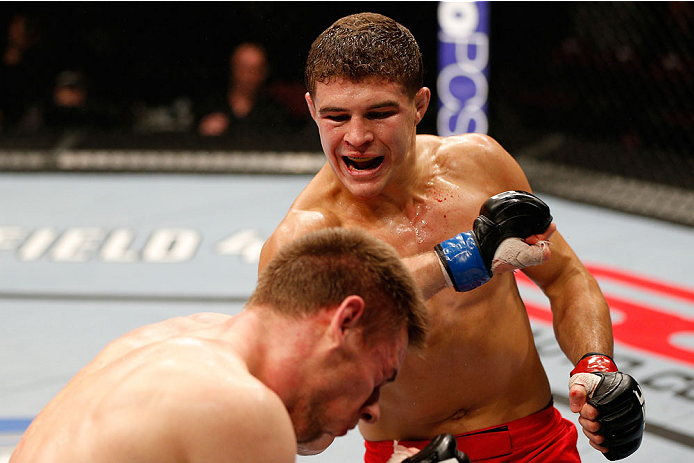 Following a grueling 13-week stint on the one and only live season of The Ultimate Fighter, Al Iaquinta had to go 14 long months with the last entry on his record being a loss.

The Serra-Longo Fight Team member stood out as an early favorite heading into Season 15 of the long-running reality TV competition ¬— his wrestling background, success under the Ring of Combat banner, and affiliation with a team that had a history of producing quality UFC talent all working in his favor.

After being Urijah Faber’s first pick, the Long Island native advanced to the quarterfinals with a win over Myles Jury, before victories over Andy Ogle and Vinc Pichel delivered him to the finale, where he would meet fellow Team Faber fighter Michael Chiesa.

Things didn’t fall his way against Chiesa, as the Spokane, Washington product locked up a rear naked choke midway through the opening round to complete his storybook run to the six-figure contract and glass-block trophy. Reaching the finals assured Iaquinta he’d get another opportunity to step into the Octagon, but it would only come after more than a year on the sidelines spent recovering and retooling.

“It was a weird year,” Iaquinta says of the time between his loss to Chiesa and eventual post-TUF debut, a winning turn against Ryan Couture at UFC 164 last summer. “I worked so hard to get to where I’m at and then I was forced to sit out with an injury, rehab, and take the slow route back. But I think I definitely grew as a person in that time, definitely got to re-evaluate my game, and in the process of coming back, got to work on a lot of my weaknesses a lot more, becoming a better fighter.

“Even though I wasn’t training the whole time - I had a couple months where I wasn’t able to train - I was definitely improving. When I came back and was easing back into it, I got to look at my weak points and focus on them. Plus I got a little time off, which is good because the rest of my body got to heal.

“They don’t really give us much credit for that 13 weeks,” he laughs, reflecting on the longer stretch of time he and his fellow TUF 15 contestants spent cloistered in Las Vegas. “No other season has come close to 13 weeks. It’s a real testament to the guys that were on that show - they picked a real quality cast and most of the guys are still with the UFC today, doing good things. It was definitely one of the top seasons of The Ultimate Fighter, at least talent-wise.

“That was a grueling season, so I needed a little break. I would have liked it to be a little shorter than that, but I think it might have been better in the long run.”

He’s been making up for lost time ever since.

Following his victory over Couture in Milwaukee, Iaquinta jumped right back into the fray two months later, earning a unanimous decision win over Polish prospect Piotr Hallmann in Manchester, England as part of the UFC Fight Night: Machida vs. Munoz preliminary card.

Like his performance against Couture, the win over Hallmann showed that the sound fundamentals and raw skills Iaquinta exhibited heading into the Ultimate Fighter house had been further honed and sharpened, establishing the 7-2-1 lightweight as one to watch in the deep and talented 155-pound weight division.

This weekend, Iaquinta will look to make it three-in-a-row when he makes his 2014 Octagon debut, squaring off with organizational newcomer Kevin Lee on the televised preliminary card for UFC 169, the company’s annual Super Bowl weekend event. While facing a UFC neophyte wasn’t what he was expecting, the opportunity to stay active and fight close to home have him excited.

“It’s the name of the game in this division - stay healthy, stay active, put on exciting fights, and win with dominant performances. I thank God I’ve been healthy and I’ve been putting in the work, so that’s all I can ask for. If they give me a call and I’m ready to go, I’m more than willing to hop in there and put on a show.

“I’m trying to have some longevity in this division. I think that’s what you need to stand out above everybody else - stay around, stay in the public eye, keep winning fights and having people want to see you compete.

“It’s going to be cool,” says the Nassau Community College product of fighting at the Prudential Center in neighboring New Jersey. “It’s going to be a little throwback to my Ring of Combat days when I had all my friends and family coming out and getting rowdy. It’s great to have them coming down and supporting me. A fight is a fight, and when I’m in there, I’m looking out for my own ass, just the before and after is going to be a lot more pleasurable having my friends and family around.

“When they gave me his name, I was a little surprised. I thought that winning my last two fights would have pushed me up a notch, but I got bumped up from the Fight Pass prelims and I’m on TV now, which is awesome, and Kevin Lee is a tough guy. He’s probably just as tough as any of the guys I would have faced if there were a jump up to a more well-known person.

That frankness and easy confidence is a trait he shares with his friend and teammate, UFC middleweight champion Chris Weidman. There is no chest-thumping or over-the-top bravado - just a surety that they’ve put in the work and are primed to do great things once the Octagon door closes.

After watching his training partner ascend to the top of the 185-pound weight class in July, Iaquinta was in Weidman’s corner for the rematch in December, and says that watching his friend set goals for himself and accomplish them inspires him to do the same.

“That’s just the way we are, man - we know we train hard. We don’t gotta tell everybody how great we are - we’re just going to go in there and show you. If you ask us our opinion, we’ll give it to you straight up, but we’re not going to go over the top and put on something that we’re not. It’s just who we are.

“Seeing him in the gym, working hard, putting in the time, and then going out there and doing exactly what he’s been training to do shows me that I’m with the right team, I’m doing the right things, and if Matt Serra and Ray Longo tell me I’m ready for whatever step is next in my career, I know they’re not just blowing smoke. They know what it takes to get to where I want to go, and I know I’m with the right team for sure.

“And seeing Chris do it just motivates me even more,” he adds. “He’s got the middleweight title, knocked out Anderson Silva, and (has been) looking amazing and that amps me up. When I see him fight, I want to get in there right away and do my work.”

And that’s exactly what he plans to do this weekend and the rest of the year.

“I’m going to find a weakness, I’m going to exploit it, and I’m going to get the finish,” Iaquinta offers, not so much as a prediction, but more as a statement of fact. “As for the rest of this year, just staying healthy, staying active, getting my fights in and getting people behind me so I can have some bigger fights, for sure.”