Ian McCall: Ready to be Champion 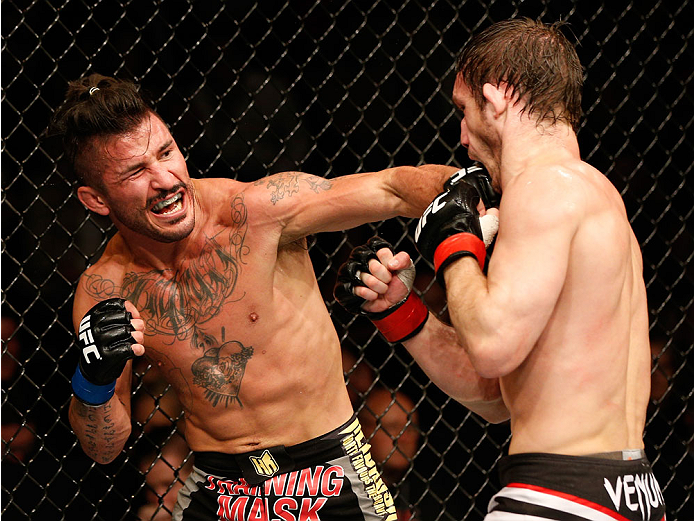 At least for the January 31 portion of 2015, Ian McCall has everything planned out.

“I'm gonna get this win, I'm gonna finish John Lineker, and I'm gonna earn this title shot,” he said. “It’s my time, and there’s no one who can stop me.”

It may sound like the typical confidence from a fighter before a pivotal bout, like the one “Uncle Creepy” has tonight in Las Vegas against the hard-hitting Lineker, but if you read between the lines a bit, the one thing to focus on is the last part of the previous quote.

McCall may be right when it comes to those he meets in the Octagon. Yes, he’s had his losses in the Octagon to current flyweight champion Demetrious Johnson and perennial contender Joseph Benavidez, but the man once considered the best 125-pounder in the world before the UFC instituted the division in 2012 has the tools to beat anyone. So why hasn’t he? The answer was always in the mirror.

Yes, you could say that the scoring mistake that turned a possible win against Johnson in their first fight in 2012 into a draw altered his career trajectory irrevocably – and he would agree – McCall’s life outside the Octagon back then didn’t bode well for a long title reign if he had secured the crown.

“Everyone knows I won that fight - and even if I didn't win the fight on that, it would have gone to a fourth round and I would have finished Demetrious in the fourth, and then I would be champion, and blah, blah, blah,” McCall said. “Someone's crappy decision-making forever changed the course of my life, but it's my own fault for letting it affect me negatively. Granted, I was in a bad position with my marriage and with my life and I was distracted, so when we fought the next time he beat me fair and square, and that is no one's fault but my own. I shouldn't have let it affect me so much and I should have just buckled down and fought better than I did. My diet was off, I cut like 18.8 pounds in the last 20 hours, and again, that was my fault, I had no one else to blame. In the Joe (Benavidez) fight - I don't think either of us fought up to how good we really are.”

Was McCall ready to be champion back in 2012 though?

“Yeah, it would have been nice,” he laughs. “I was at a good point in my life because I had my daughter and I had my career, but there were a lot of distractions that I wasn't handling the proper way. And now they're out of my life, they're gone, and I set up a better framework for my life and a better overall situation.”

After his loss to Benavidez, McCall picked up decision wins over Iliarde Santos and Brad Pickett to set up what many assume is a number one contender’s match with Lineker. At least it is for McCall, since Lineker continued his pattern of missing weight for pivotal fights. Yet while Lineker battles with the scale, McCall has put his outside the Octagon battles away, a development that has showed up on fight night.

“I finally got my head on straight and I'm doing the things that I should be doing,” he said. “I'm showing how good I really am and I think I'm showing that I am the one person that can beat Demetrious and prove that I should be champion and at least be recognized as one of the pound-for-pound best guys.”

At 30, McCall may be in his fighting prime, but the most important thing is that he’s got his life in order. Call it perfect timing.

“Everything is just better,” he said. “Life is good. My training is better, my personal relationships are all better, everything in my life is just more on track, and I'm able to focus better.”

Now he’s really ready to be champion, and that quest begins tonight.

“This is the entertainment business, and I need to go out there and put on a show, entertain people, and finish my opponent,” he said. “And I need to do it in spectacular fashion. It's been a slow progression, but this fight will show what I'm made of. And it's up to me.”