"He’s really good, man. But I think I’m technically better in every aspect of the game than him." - Ian McCall 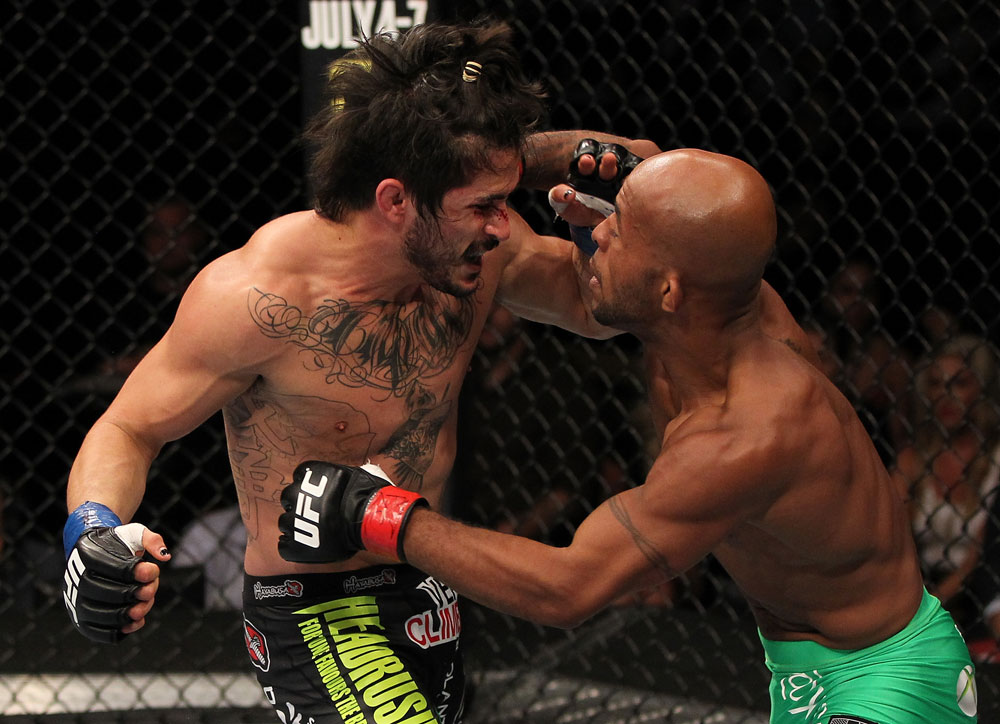 “Joe hasn’t changed a bit. Not to say he sucks because he’s really good for a reason, but he does the same things, he fights the same way.”

Taken out of context, the above quote may seem harsh and perhaps even an attempt to bait Joseph Benavidez, whom Ian McCall fights on February 2 at UFC 156, into a trash talking battle. But when you speak to “Uncle Creepy” at length, it becomes clear that he just says what he thinks –no more, no less. He doesn’t sugar coat his own mistakes or shortcomings and he doesn’t exaggerate or embellish his strengths. Consequently, that frankness also applies to other fighters.

In assessing his two fights with Demetrious “Mighty Mouse” Johnson, McCall says of the first bout, with no hesitation, “I thought I had it but I was excited if it went to a fourth round because then I’d get to beat the s**t out of him.”

Of the rematch, he’s equally frank, “I blew it. I wasn’t focused. I had an off training camp and cut 18-20 pounds in the last 20 hours. They went in and worked on stuff to beat me and I changed up my whole style and that’s not the way I’m going to beat him. I’m going to beat him by fighting the way I like to fight, the way I naturally fight.” And to drive the point home he admits, “It’s no one’s fault but my own.”

Soon after losing to Johnson, Ian was scheduled to fight John Moraga and had to back out due to a knee injury. In sizing up Moraga as an opponent, McCall bluntly states, “He’s pretty good. He finished Ulysses [Gomez] and [Chris] Cariaso but neither fight was spectacular. He’s obviously working his way up.”

After sitting out from the knee injury, things only got worse as some of the consequences of McCall’s wild and troubled past came back to haunt him and he found himself dealing with the police and legal issues. “I was keeping close enough distance to nefarious characters. Someone says something… An actual drug dealer says someone else is a drug dealer and they have to come check on it. They came over to my house and I was cleared of everything but still it’s my own fault for keeping friends like that around.” While allegations of drug dealing were quickly disproven, McCall was charged with driving on a suspended license when traffic tickets he thought he had taken of care of weren’t actually paid. Since he’s still on probation from his sordid past, he wound up having to do the minimum sentence of a month in jail for a parole violation.

McCall sees that these things, despite being somewhat unfair, have still resulted from choices that he has made.

“I’ve done horrible things in my past. I’ll be the first to admit it. I’ve been open about that. I’ve done drugs, sold drugs and done other crappy things but I don’t do that anymore. So, whatever… it’s in the past.”

With his past put back into its place behind him, Ian can again focus on his future. He will get his opportunity for redemption inside the octagon when he fights Benavidez this Saturday. While the temptation to indulge in “MMA Math” by comparing McCall’s fight with Johnson to Benavidez’s fight with Johnson, it’s apparent that this isn’t something Ian puts a lot of stock in.

“Joe hasn’t changed a bit. Not to say he sucks because he’s really good for a reason but he does the same things, he fights the same way. He throws kind of wild, looping overhand hooks. I just have to mind myself and pick him apart, kind of like Demetrious did. The same in and out game plan. The only difference is I’m a lot more violent and hit a lot harder [than Demetrious.]”

McCall stresses that he is more focused on working on being at his best rather than game planning too much specifically for Joe. “Defense is a big part of it because he likes to finish people and he’s gonna look to put the power on me, but I always just work on my overall game. That’s why I am who I am and am as good as I am. I work year round to be better at everything.”

“He’s really good, man. But I think I’m technically better in every aspect of the game than him. Things at [Team] Alpha Male don’t really change. They’re all super athletes and they’re really good at what they do but they don’t change. I know now they have Duane [Ludwig] as their stand-up coach, but it’s not like all of the sudden he’s going to become Ramon Dekkers. Just because he has a Dutch style kickboxing coach isn’t going to make him a Dutch kickboxing champion… and if he wants to try and change up his game that quick, even better. I get the crap kicked out of me by actual professional Muay Thai guys all the time. You wanna play that game, let’s roll the dice. I will sleep you”, McCall says before clarifying that he doesn’t see Joe deviating from his bread and butter. “He’s not stupid. He’s gonna play the same game he always does and slug it out and maybe score a takedown. He’s gonna try and take my head off because he’s good at it.”

With Johnson having successfully defended his flyweight belt against John Dodson last Saturday, and the comparatively sparse flyweight division still growing, it’s inevitable to wonder how far away Ian could be from a title shot if he does beat Joe. Yet one has to acknowledge that with Johnson retaining his belt, it’s hard to imagine much interest in a third fight so soon. Trilogies in MMA don’t generally happen within the space of a year.

“He already beat both of us [him and Benavidez] last year so, technically, I don’t think we deserve it, but of course, I would never turn down a fight –especially with Demetrious.”

While McCall doesn’t mind speculating on the what-ifs, he’s not too concerned with things that are out of his control.

“It’s really up to the bosses. I’m here to fight whoever they want me to.”

Ian seems content to do whatever it takes and fight as many opponents as he needs to to earn his way back to the title shot.  Demanding opportunities that haven’t been earned isn’t something McCall agrees with. He uses the example of a fighter who he had never heard of before and who isn’t even in the UFC calling him out.

“If he wants to fight me and call me out, win first, come to the UFC, fight some lower level guys and maybe get a shot at me.”  As to why this guy would call him out, Ian speculates that it may be the next best thing to calling out the champ. “I think it’s because I’m like the uncrowned champion because everyone knows I can beat DJ and everyone knows I beat him the first time. I love calling people out but you have to work for it first”, he explains. McCall emphasizes that this also applies to himself. “People keep asking me about a title shot and I just want to shut up and work. I just want to get to work and fight as much as possible. I’d fight four or five times a year if I get the chance.”