"I just see myself being too aggressive, too strong, and too mean for Yves.” - Ian Loveland 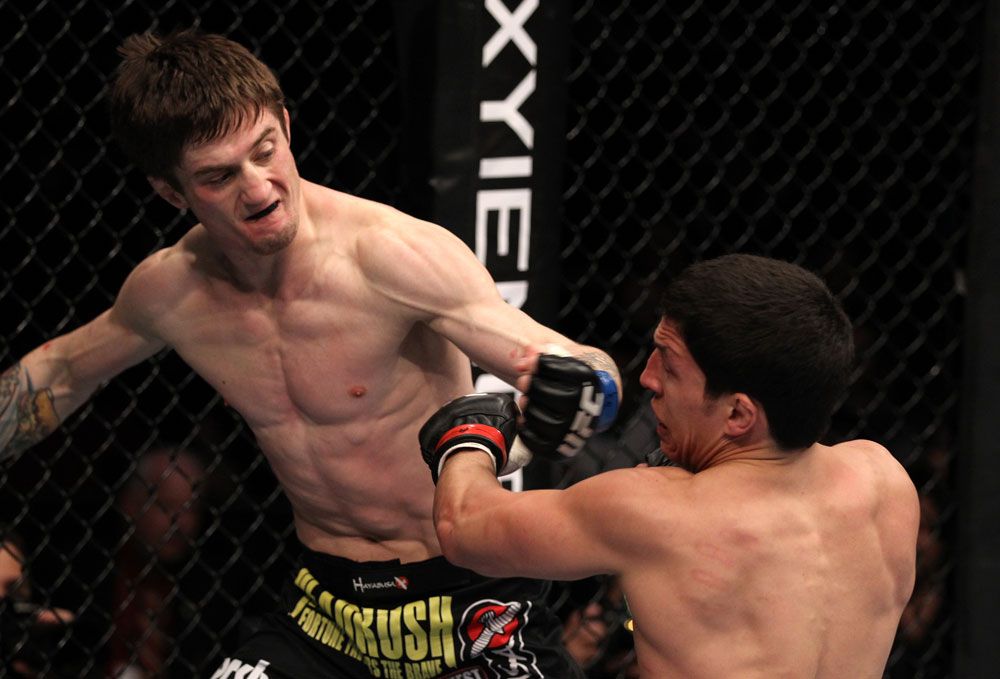 You can’t believe everything you read on Wikipedia. So when the online encyclopedia stated that UFC bantamweight Ian Loveland’s “interest in martial arts started when he was five years old and he began training in Tae Kwon Do because, “I kept getting into fights and my parents wanted an outlet for me,” that wasn’t entirely accurate, as “The Barn Owl” points out that he wasn’t exactly a five year old streetfighting legend in Portland, Oregon.

“I think several quotes have been gathered together and mixed and matched and treated however they wanted,” said Loveland of the Wiki entry. “But I’ve always just been a little s**thead, the smallest guy everywhere. It’s like having a little terrier that keeps tearing up the couch (Laughs); you gotta find something for him to do to get that energy out.”

And for the record, though he can’t confirm the validity of the story, he did have some scrappy moments as a toddler.

“My grandma tells me a story of when I was like two or three years old and I punched a kid because he wouldn’t go down the slide,” he laughs. “He was scared to go down the slide and he was a lot bigger than me and he was holding everybody up. So I gave him a good shot to the gut. I don’t know if it’s true or not, but my grandma loves to brag on me so…”

At this point, you get the impression that Loveland is one of those rare people who find their niche in life almost immediately, and his attitude has remained consistent through a stint in the amateur MMA ranks and now through nearly six years as a pro. He may not be the greatest athlete or the flashiest performer, but he’s going to make you fight and make you go to places you may not want to visit. Just ask him about his UFC RIO bout with Yves Jabouin this weekend, and he’ll fill you in on what he believes is likely to happen.

“I just see myself being too aggressive, too strong, and too mean for Yves,” said Loveland. “Not taking anything away from his talent or his skill set – he’s a great striker and I know he’s gotten a lot better in other areas, like wrestling – but he just can’t keep pace with me. I’m just too mean.”

Surprisingly enough, take the 28-year old out of the gym or the Octagon, and he’s an affable young man with a clear focus on what he wants out of the fight game and life in general. Close that gate though, and it’s a whole ‘nother story. That’s what happens when you’ve traveled through the sport the way he has. This is no “three fights and a UFC berth” tale; no, Loveland may be part of the last generation of fighters who had to pay more than their share of dues before making it to the big show. Being an undersized 155 pounder didn’t help either.

“Your record can tell a lot about you, but it doesn’t tell the whole story,” said the 14-8 Loveland. “I’ve got a lot of losses on my record, but I was fighting at 155 a lot of my career and at 145. I’ve only had two fights at 135 pounds and I’m not that big a guy. It’s a lot different than boxing, where they can groom a fighter and get him the right fights and get him on the right track. I know when I first started fighting, once you fought every other amateur, that’s when you go pro, and once you fought every other pro in the area, that’s when you moved on. You couldn’t be so selective. I think the next generation of fighters, and you might already be starting to see that a little bit, there’s gonna be that many more easy fights for people to take and they can start grooming guys and the records are gonna start getting up there like you would see from a professional boxer with a 30-0 record. Good luck doing that five years ago.”

14-8 certainly doesn’t look sexy on a fight poster or in an event program, but among his peers, Loveland’s pro slate is a badge of honor from an age slowly fading away. And that’s a good thing for young fighters who can get decent fights in their proper weight class and get paid properly to do so. But to the hardcore, guys like Loveland do deserve a respectful nod of the head for their struggles.

“I know I haven’t had the easiest road here,” he said. “You look at a lot of guys and you see their record and people go ‘wow, that guy’s 17-2’ and you look at who they’ve been fighting and it’s 1-1, 2-1, 3-4, and you haven’t heard of a single one of these guys. I know I’ve paid my dues and I think that when I fight some guys like that, they’re gonna learn their lesson that I had to learn years ago when they fight me. So what goes around comes around.”

And things are starting to come around for Loveland. Long relegated to the local scene because there was no high-profile place for him to show his wares in his natural weight class, he finally parlayed a six fight winning streak from 2007 to 2010 into a UFC berth at featherweight, and he made the most of his shot with a three round win over Tyler Toner on the Ultimate Fighter season 12 finale card in Las Vegas. A drop to bantamweight followed, but he wound up on the short end of a decision against top contender Joseph Benavidez in a UFC 128 bout in March. And though he says of Benavidez, “He’s a classy guy and I’m sure he’s gonna be on top for a while, so I’m sure that I’ll get another crack at him,” the competitive nature of the defeat makes it hard to swallow.

“I knew I could hang with that kid and I really thought I could beat that kid,” said Loveland. “According to the scoring criteria that’s laid out right now for MMA, yeah, I lost that fight, but in my mind, man to man, and judging from the way Benavidez looked after the fight, he looked to be relieved to be out of the fight and he looked like he was in a fight, so I don’t feel like he beat me up. I think I did as much damage to him as he did to me. I stuffed a lot more takedowns than he was successful in. Every time I was taken down I got right back up to my feet, I never finished a round on bottom, and I didn’t win a decision, but I don’t feel like I lost a fight to him, man to man.”

There’s that “mean” again, and you can expect that to serve Loveland well on Saturday night, when he’s the American fighting the Haitian-born Canadian in Rio De Janeiro, Brazil. Just how did that happen?

“I don’t know how that worked out, but I’m glad it did because I need another fight and I need to get back on track,” he said. “And I’ve been wanting a free trip to Brazil for a while now. I’m imagining it’s gonna be pretty nuts. I know how excited they get over soccer matches and what not, and a lot of their top guys are on the card, and maybe their top guy in Anderson (Silva), so I imagine emotions are gonna be running high, and it’s just gonna be an energized arena. I’m pretty pumped about being a part of it.”

The fans will be too, and with Loveland-Jabouin being the first bout of the night, every punch, kick, or takedown is likely to be met with a rousing ovation. And despite being tagged as a wrestling-based fighter, Loveland is just as comfortable on his feet, and his hands can give any bantamweight trouble. But if the fight does stray to the mat, he isn’t about to let the excitement level dip.

“If I take a fight to the ground, it’s gonna be just as nasty,” he said. “I don’t have the blanket skills that a lot of the more solid wrestler guys have, and if I get on top of you, there’s gonna be just as much damage done. I like knocking people out standing up, and I had been on a real roll dropping guys before Benavidez, and I feel real comfortable there and I think I can do that to Yves. But if I put him on his back, I can knock him out down there too and it will look just as cool.”

If you haven’t guessed it by now, Loveland is amped up for this fight and the future. After years in the shadows, it’s getting to the point where he’s going to be seen by more and more people each time out, and for a veteran of the sport, there’s no better place to be. For him, the Jabouin fight is just the first step.

“The casual UFC fan probably doesn’t know who I am yet,” he admits. “So I guess I’m just waiting for that moment to break out on TV and show people how exciting I can be. I think Yves is a better opponent for me to showcase more of the entertaining aspect of my skills than a guy like Benavidez, who fought a very smart fight against me and kept himself really safe in between those times where he could get into scrambles and look for takedowns and slow the striking action down. I think Yves is gonna be the kinda guy that I can really show what I’m all about and I’m just looking forward from here. This fight’s gonna set things off for me, I think.”