“I’m definitely the underdog, but skill-wise I don’t consider myself the underdog. It’s not going to be a ‘Rocky’ thing where I have to fight tooth and nail to come back from behind." - Ian Loveland 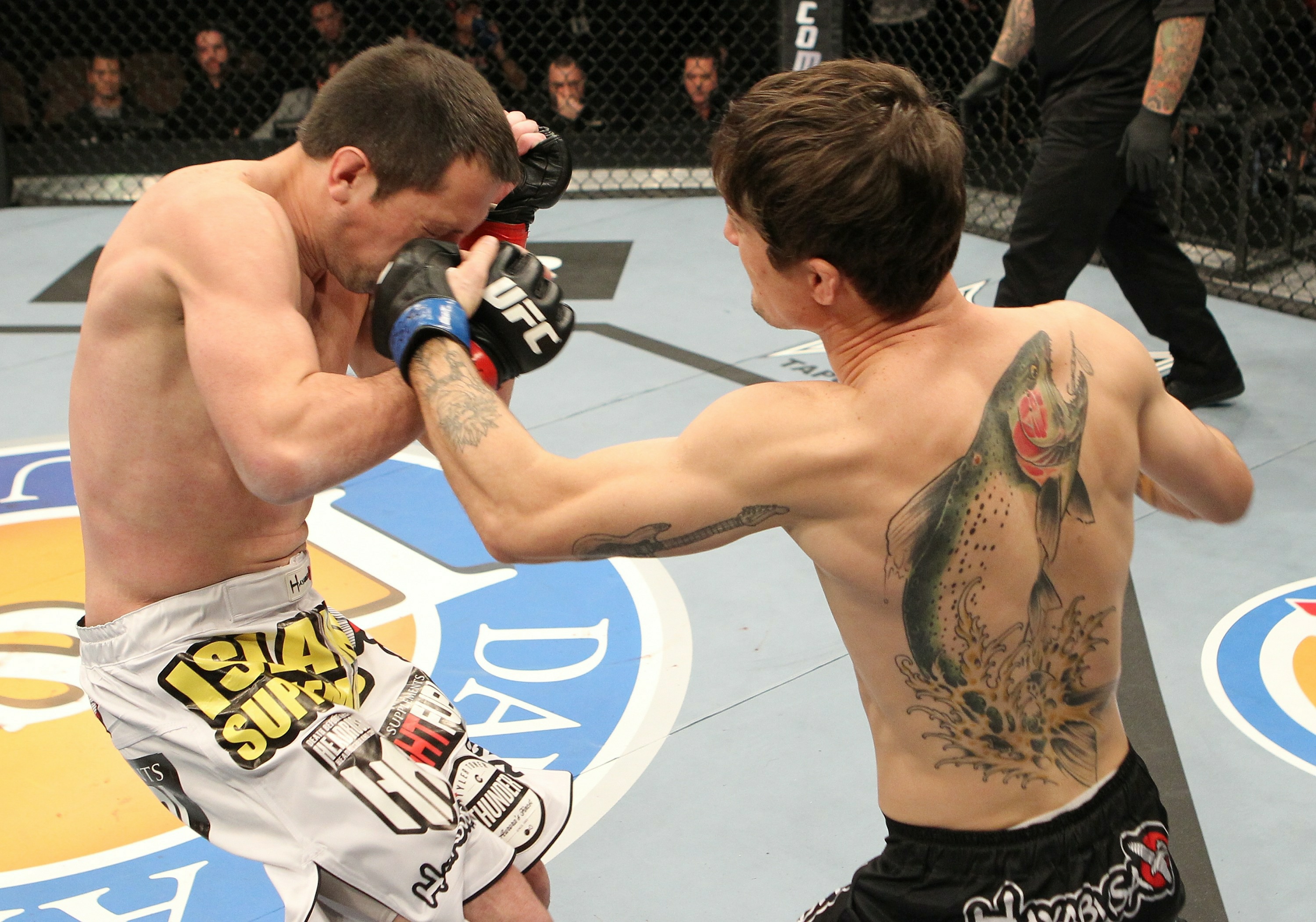 How obsessed is Ian Loveland with fishing? Enough to get a gigantic rainbow trout tattooed across his entire back.

The extraordinary choice of body art naturally piques the curiosities and prejudices of cageside observers. Today, however, the bewilderment ends. The UFC bantamweight, who faces Joseph Benavidez next week at UFC 128 in New Jersey, revealed that the steelhead trout billboard is not a metaphor for something else and holds no hidden meaning.

“I just wanted a steelhead tattoo,” he said. “Steelhead fishing is my life. Steelhead and fighting.”

In fact, the Portland, Oregon native believes that battling a 10-pound fish with a rod and reel has much in common with clashing wits and wills against another man inside a cage. Of note: Loveland said he has fought “the hardest fighting fish in the world” for upwards of 15 minutes straight – the same time limit for a standard three-round fight in the UFC.

“If you catch a real big steelhead, it’s the same rush as going into a fight. You just get flooded with adrenaline,” Loveland said. “It’s all about the high … The best thing about living in Portland is the proximity to world-class steelhead fishing.

“A steelhead is a sea-run Rainbow trout; it’s the premier game fish in the world. It takes a lot of time to learn how to catch them and a lot of technique. The coolest thing is the variety of places you can find them. You can find them in remote places and close to downtown Portland, within 15 minutes of my house.”

There are other similarities between Loveland’s favorite pastime and courageous profession, the 27-year-old observed. In fighting, you’re trying to exploit an opponent’s weakness. With fishing, you’re trying to discover what will make a fish put a hook in its mouth on any given day. And, believe it or not, what instigates a fish one day to bite may not work on another day.

“It’s all in the preparation. Fights are won and lost in the gym. Same with fishing,” said Loveland (14-7). “You have to develop a solid gameplan. When I go fishing I keep my eye on the weather, the river levels, the snow, the rain, the wind -- everything plays a part. It’s just like fighting, where you have to work on your ground, your striking, studying tape on your opponents … there are so many factors involved and fishing is the same way.”

A product of Team Quest, Loveland survived a rocky 3-4 start to his career but has
become red-hot, winning seven straight. He has not tasted defeat since 2007 and credits his turnaround to maturity and re-evaluating his goals.

“Fighting probably wasn’t my number one priority, day to day,” he said. “I was spending way too much time fishing and doing other stuff. Eventually I decided, if I’m going to half-ass it I might as well quit. It’s taken priority in my life now. That’s the main difference.”

The fighting life has made a globetrotter of him, with bouts in Bahrain, Tokyo, British Columbia, Quebec and Las Vegas. Coming off a unanimous decision victory over Tyler Toner at The Ultimate Fighter 12 finale, Loveland has spent the bulk of his career competing at 145 and 155 pounds. The wily counterpuncher has competed but once at 135 pounds in his career, finishing his foe in under a minute.

“I felt as good as I’ve ever felt going into that fight,” he said. “My cardio and my speed are better at 135 pounds … (Benavidez is) a solid fighter, a solid wrestler. I’ll definitely have the height advantage, and I think I’ll have the size advantage, too. Skill-wise I don’t see any glaring holes in his game.

“I’m definitely the underdog, but skill-wise I don’t consider myself the underdog. It’s not going to be a ‘Rocky’ thing where I have to fight tooth and nail to come back from behind. I picture myself controlling the fight and imposing my will. I’m going to win the fight. I don’t know how. I should be able to finish him with a knockout or a submission.”

Other than that, Loveland has relatively little to say about MMA. But switch the topic to fishing and his speech accelerates, his voice rises and his typical brevity suddenly vanishes.

So serious and guarded is Loveland about his trout fishing, he declined to reveal the numerous rivers he frequents.

“Those are secrets. I don’t like company,” he asserted. “I really don’t care if anybody else is catching fish as long as me and my buddies are catching fish.”

He calls himself an addict, and said pro fighting is helping to support it.

“Every cent I’ve ever made fighting has gone into fishing,” said Loveland, who trains with Team Quest. “I’ve spent money I don’t have, too. Gas, rods, reels, tackle, boats, bait, all that stuff.”

Relatives have attempted an intervention. Sort of.

“My wife has definitely curbed some of my fishing spending over the course of our marriage,” he said. “I’ll keep getting crazier and crazier and start fishing everyday unless my wife keeps me in line.”

One of Loveland’s coaches, Matt Lindland, is a kindred spirit.

“Pretty much any discussion we have about fighting takes place on the river,” Loveland said. “I only have time to fish and fight. I can’t squeeze anything else in. For a big fight like this I haven’t had a whole lot of opportunities to fish. I’ve been fishing like once a week.”

In fighting, there are consequences, namely joy and pain. But what’s the worst that can happen when Loveland goes fishing?

“That’s the good thing: There’s no such thing as a bad day of fishing,” he said. “There are bad days fighting and I’ve definitely had my share of them, but fishing is good because there’s not the pressure, it’s a release. Fighting is also a release, because I get to take out frustrations and built-up anxiety and excess energy. But fishing is a way for me to manage the stress of competition.”

Loveland’s goal is to win an Ultimate Fighting Championship. But what drives him is neither riches nor fame. He envisions fighting as a vehicle to someday help him get paid to go fishing.

“I’m hoping to be UFC champion to gain name recognition and start my own (TV) fishing show,” he said. “People will want to watch me on a steelhead fishing program on Versus or something like that.”

Until then, Loveland must keep rattling off wins. In between fights, he tries to add more ink to his rainbow trout tattoo, which remains an incomplete work in progress. The image began two years ago. Loveland knows that many people might think it’s dumb, and he said he doesn’t really care. But his fellow fishermen have been totally supportive.