For most of 2020, Ian Heinisch was able to dodge plenty of bullets when it came to the COVID-19 pandemic.

In November, it got him.

“You know how it goes with me,” laughed Heinisch, who battled through three days of being sick before getting back to the business of chasing a middleweight title.

That’s the good news. For “The Hurricane,” the bad news was that last year only saw him make the walk to the Octagon once. It was a heck of a performance, as he halted Gerald Meerschaert in the first round back in June, but as far as making that move up the 185-pound ladder, the universe had other plans.

“Last year I made so many changes, did so much different training and so much growth happened, but I only got to showcase a minute and 15 seconds of that with one fight,” he said. “So I felt like that was The Hurricane 2.0 and I feel this year the 3.0 version is coming out. God willing I'll be healthy and I want to get in at least four fights this year. I want to be super active, make my name known, make my mark in the Top 5 and be in the contenders' conversations.” 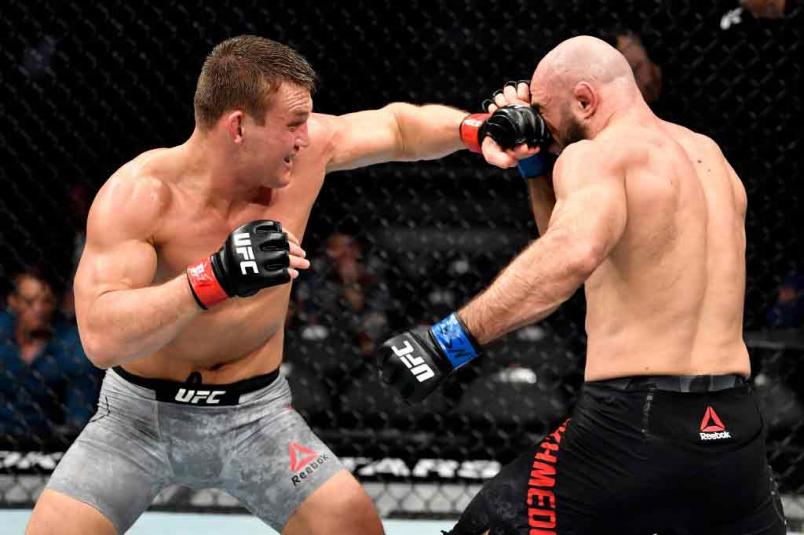 Ian Heinisch punches Omari Akhmedov of Russia in their middleweight bout during the UFC 245 event at T-Mobile Arena on December 14, 2019 in Las Vegas, Nevada. (Photo by Jeff Bottari/Zuffa LLC)

Ian Heinisch punches Omari Akhmedov of Russia in their middleweight bout during the UFC 245 event at T-Mobile Arena on December 14, 2019 in Las Vegas, Nevada. (Photo by Jeff Bottari/Zuffa LLC)

It’s an ambitious schedule for the No. 15-ranked Heinisch, but his optimism is warranted, considering that after being forced out of his November 7 bout with Brendan Allen, he soon got a call for a UFC 258 pay-per-view main card bout against former world title challenger Kelvin Gastelum.

“Yeah, the opportunity's definitely way better, but it was a little bit hard becaus it would have been great to get that knockout (over Allen) and then be able to fight Gastelum,” he said. “Last year was a pretty inactive year, which I don't like. But that's the way things go. God has a plan and it was hard to watch Sean Strickland knock him out the week after and get the 50G bonus because it was almost like, 'Oh man, he stole my bonus and my knockout.' (Laughs) Brendan Allen was ready to go, but everything happens for a reason, and I'm excited for this opportunity coming up.”

Former LFA champions Heinisch and Allen did have a little heat going into their bout, and anything that gives you more motivation to get up in the morning and train is never a bad thing, but Heinisch is just as amped up for his fight with Gastelum, not because there’s any bad blood, but because facing the No. 9-ranked contender is the exact kind of matchup the 32-year-old has been craving since his Octagon debut in 2018.

Owner of a 3-2 slate in the UFC, Heinisch came out of the gates fast, stumbled a bit, then got back on track with the win over Meerschaert. Through it all, he’s kept a positive attitude, something hard to fathom given his well-documented battles in life before MMA helped him turn everything around. 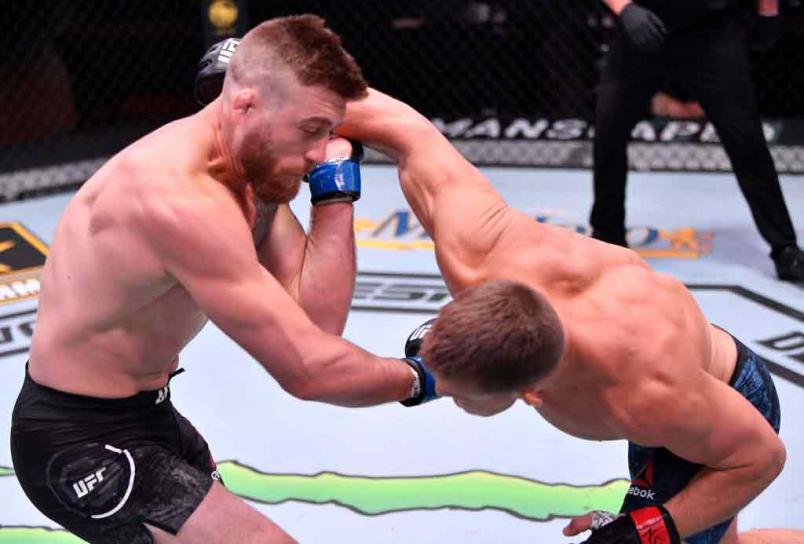 “It's a complicated life, but I just try to roll with it with optimism,” he said.

There’s only a one-word question to that comment – how?

“Life experiences give you that,” the Coloradan said. “Obviously getting locked in prison in Spain for two-and-a-half years can be looked at as a pretty horrible thing, but being able to get sober, find God, train full-time to become an MMA fighter, which now I do for a living, and kick start my true life, there was so much upside that it was probably the best thing that ever happened to me, now that I look back. When bad stuff's happening in the moment, it's hard, but then all the good stuff and the blessings come on the other side of that. And I've learned that through trials and now I've adjusted my mindset.”

Basically, it’s all about perspective. Even losing the Allen fight turned into something positive, as he was offered the bout with Gastelum soon after. It’s inspiring stuff, and a story that would someday make a great movie. Oh wait, that’s already in the works. And while it’s not always easy for Heinisch to re-live everything he’s gone through in his 32 years on the planet, life is going so well now that he can look at his past with a certain detachment. 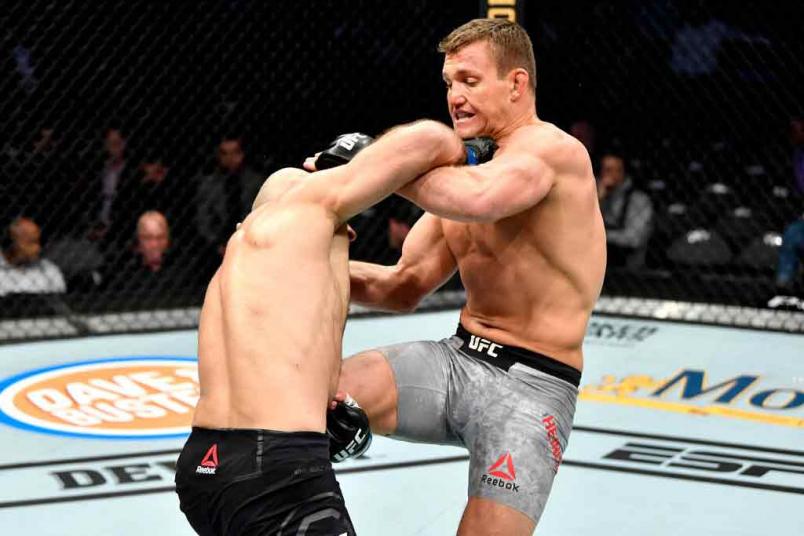 Ian Heinisch strikes Omari Akhmedov of Russia in their middleweight bout during the UFC 245 event at T-Mobile Arena on December 14, 2019 in Las Vegas, Nevada. (Photo by Jeff Bottari/Zuffa LLC)

Ian Heinisch strikes Omari Akhmedov of Russia in their middleweight bout during the UFC 245 event at T-Mobile Arena on December 14, 2019 in Las Vegas, Nevada. (Photo by Jeff Bottari/Zuffa LLC)

“Prison changed my life, and finding that relationship with God, being born again, I feel like I'm a new person,” Heinisch said. “I don't have addiction issues anymore, I'm not dealing with the demons I dealt with before, I've been set free, and with that mindset and the changing of everything, it's just been an amazing journey to see how everything is unfolding in my life and I'm able to look back at all the past troubles like it's a movie, and I'm so detached from that person, because that person's not me anymore. That person's dead. So I can look back at that and speak openly and not feel any crazy feelings. There's still a few things that can bring back some old memories, but for the most part, it's amazing.”

All he needs now is a championship belt to put a happy ending on his tale. In the meantime, there’s a fistfight with Kelvin Gastelum on Saturday and some people’s lives to change.

“I don't mind it (having to re-tell his story) that much because I feel God put me through all these troubles to be a testimony, and that's a powerful testimony to give people hope,” he said. “Recovering addicts, people fresh out of prison, I'm seeing a lot of good people's lives change that were down in the dumps and hitting rock bottom, so it's pretty inspirational for me to see the change that my testimony can have on people's lives.”