After taking some lumps, Ian Heinisch feels primed to prove his spot among the elite.
By Thomas Gerbasi, on Twitter: @TGerbasi • Nov. 3, 2020

You could call this Saturday’s matchup between Ian Heinisch and Brendan Allen the greatest fight in LFA history to be held in the UFC’s Octagon. But when two of that promotion’s former middleweight champions meet, Heinisch believes the fight will show that in their current home, there are levels to this that Allen hasn’t reached yet.

“The dude's young and hungry and he's got an exciting style, which I like, but I had to take my lessons before I got into the top 15 or broke into the top 10 and I feel like that's where he's at right now,” said Heinisch. “He's got to take his lessons, he's gotta grow and move on. My mission's been the same. I've had to prove myself against a non-ranked Gerald Meerschaert and now I'm gonna fight a non-ranked Brendan Allen, and then my aspirations and goals are to climb the rankings again and I'm excited. I'm not looking past Brendan Allen, but I truly feel I'm on a different level and I'm gonna go prove it.”

Confident words from the 32-year-old, who punched his way into the rankings on the strength of back-to-back wins over Cezar Ferreira and Antonio Carlos Junior, then stumbled a bit in consecutive defeats at the hands of Derek Brunson and Omari Akhmedov. But “The Hurricane” doesn’t regret those two losses thanks to what they taught him about life in the UFC. 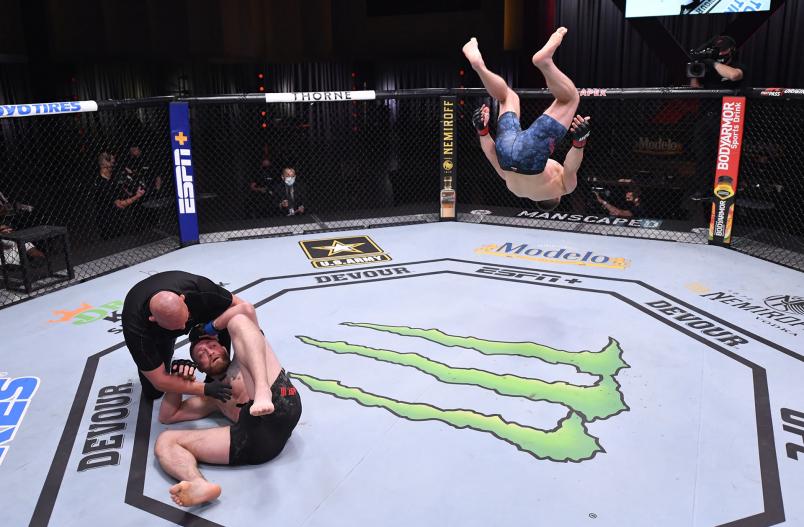 Ian Heinisch celebrates after his knockout victory over Gerald Meerschaert in their middleweight bout during the UFC 250 event at UFC APEX on June 06, 2020 in Las Vegas, Nevada. (Photo by Jeff Bottari/Zuffa LLC)

“I learned so much from fighting guys like Derek Brunson and Omari Akhmedov, especially Brunson,” said Heinisch, who earned his UFC contract on season two of Dana White’s Contender Series in 2018. “Seeing these little tricks that he (Brunson) does, the things that make him such a veteran of the sport and that he's learned over the years that he's been in the UFC, fighting the guys at the highest level. And I grew so much from that fight, that loss, that lesson. And I feel like those are just things you have to go through - you have to go through wars and battles with the highest-level guys to learn these things, and I feel like I've learned so much and I'm more experienced and more comfortable in the cage.”

Heinisch bounced back from those defeats in June with a 74-second knockout of Allen’s longtime teammate Gerald Meerschaert, proving that he is far from done among the elite of the 185-pound weight class. It’s that ability to overcome adversity that he believes gives him an edge over the 24-year-old Allen, who is perfect in three UFC outings, most recently a hard-fought win over Kyle Daukaus in June. 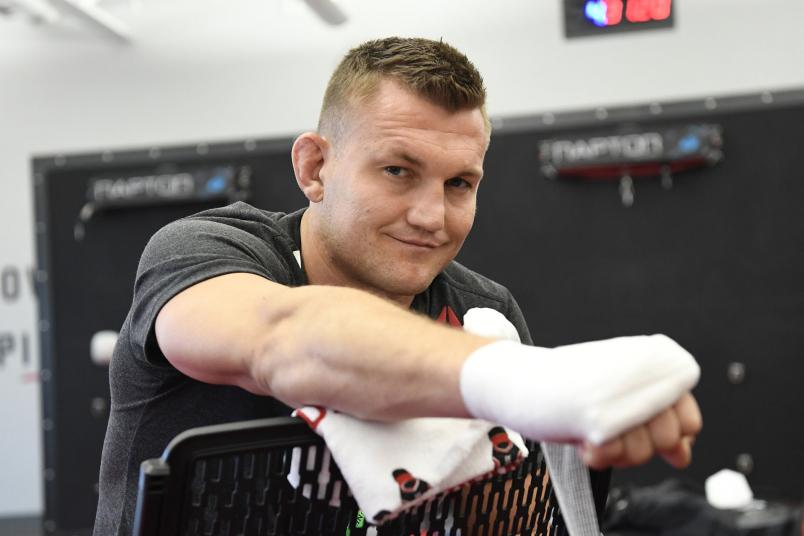 Ian Heinisch has his hands wrapped backstage during the UFC 250 event at UFC APEX on June 06, 2020 in Las Vegas, Nevada. (Photo by Mike Roach/Zuffa LLC)

“If you look at Brendan Allen, he fought a newcomer his last fight, a debut guy, and you can argue that he lost that fight,” said Heinisch. “He took a lot of damage, too, and I saw a lot of holes in his game. I feel like someday he's gonna be a great fighter, but right now it's my time and I'm gonna expose him and really put him in his place, humble him, shut him up and move on.”

That last statement is an example of the heat between the two middleweights, adding to the anticipation for their showdown, but in a year in which he nearly lost the Meerschaert fight two days before it happened due to a false positive COVID-19 test from one of his cornermen, then saw a fight with Allen scrapped due to a knee injury, the Denver native will be happy to punch anyone in the face come Saturday night.

“It's kind of been a rollercoaster this whole year,” he said. “So I'm just going day-by-day.”

That rollercoaster could get to the good part with a win over Allen, though, and that’s just what Heinisch is expecting.

“I feel like I was in his (Allen’s) spot a few fights ago and now the roles have turned and I'm excited to be on the other side of that and get to put him back where he belongs and then I get to go back to what my dreams are and keep climbing those rankings. I want to fight one of these guys like (Marvin) Vettori or (Chris) Weidman or (Edmen) Shahbazyan. But obviously I can't look past this guy. Everything's focused right now on Brendan Allen, but it's my time and he's gonna find that out November 7th.”