"I have confidence in every strike I throw that if it connects
it can end the fight.  I think because of that confidence I tend to
finish." - Hyun Gyu Lim 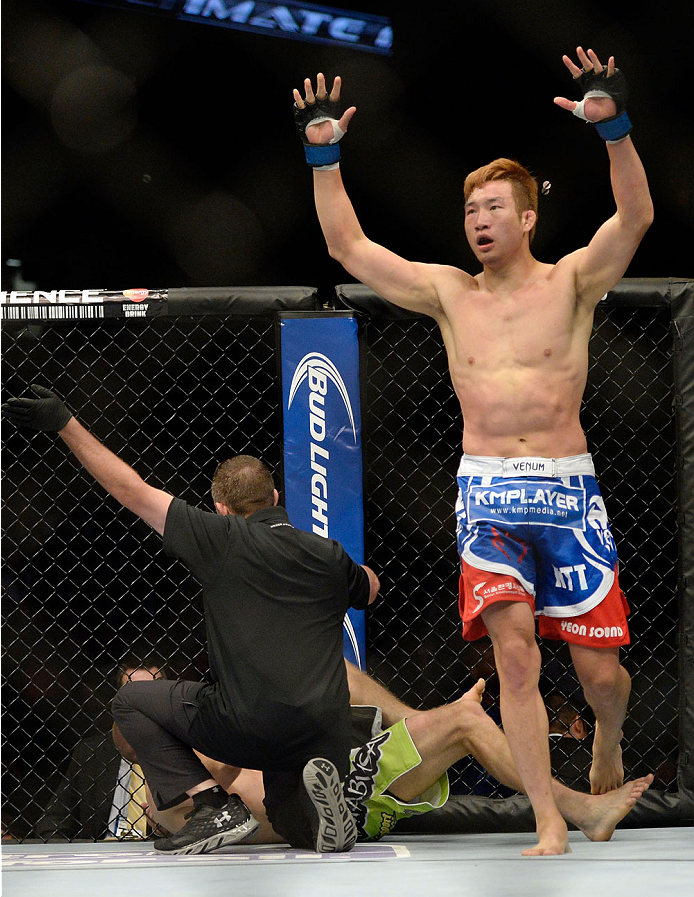 Long before he was “The Ace,” a welterweight force of nature who has won seven consecutive MMA bouts (all finishes), including two in the UFC, Hyun Gyu Lim wasn’t exactly the kid you would expect to be tearing up the Octagon and headlining this Saturday’s event in Singapore against Tarec Saffiedine.

“When I was young my body was really weak and I wasn't a very good athlete,” said Lim through translator / manager Michael Ahn. “I would get sick and injured a lot.”

That wouldn’t be the case for long, and after a stint in the army, where he discovered MMA through watching the PRIDE and Spirit MC promotions, the Seoul native joined up with the Korean Top Team in order to learn the sport.

“After a while, fighting just seemed like the natural thing to do after all that training,” said Lim, but to his parents, he was still the kid who got sick and injured. So he didn’t tell them when he turned pro in 2006. Eventually, they found out though.

“At first I fought in secret and my parents didn't know, but one day they saw me on TV,” he said. “They were really against it. Now they cheer me on, but of course they still worry about me.”

That’s a parent’s job, but they need not worry too much about their son, as he’s proven that he can carry himself pretty well on fight night, something that wasn’t always the case early on, as he only managed a 5-3-1 pro record, not exactly UFC material. But after back-to-back losses to Max Fernandez and Dmitry Samoilov in 2008-09, he turned things around.

“That was my first time losing two fights in a row,” said Lim, chuckling as he fakes a heart attack thinking about that bout with Samoilov. “After that, I treated my other fights like they were the last fights of my life.  I have continued to have that mentality to keep me sharp.”

It’s worked to the tune of seven consecutive wins, including UFC knockouts of Marcelo Guimaraes and Pascal Krauss, but even though he’s become a rising star in the UFC, for a while, he had to play the waiting game as he watched his fellow South Koreans make their way to the Octagon. Yet instead of being jealous, Lim found inspiration in the success of his countrymen.

He got his shot in March of last year, knocking out Brazil’s Guimaraes in two rounds. Five months later he did the same to Pascal Krauss, earning Fight of the Night honors in the process. You could say he singlehandedly destroyed the idea of the first-time UFC jitters, but not so, admits the 28-year-old.

“The UFC jitters are real,” he laughs. “Everybody gets nervous, especially on a big stage like the UFC.  I'm nervous in the locker room before the fight, but once I get into the Octagon, that nervousness turns into focused energy.  It's really a change in mindset.  It's odd, but when the cage door locks I'm calm and at peace.”

There is no calm or peace in his fighting style, as Lim pushes the pace and is more than willing to take one to give two if those two will finish the fight. And with nine knockouts in 12 wins, he’s not accustomed to sticking around long once he lands with his fists, knees, or feet.

“I don't really think about the finish in and of itself,” he said. “However, I have confidence in every strike I throw that if it connects it can end the fight.  I think because of that confidence I tend to finish.”

Following his fast start to his UFC career, Lim was scheduled to face Japanese newcomer Kiichi Kunimoto on Saturday, but an injury to Jake Ellenberger opened the door for him to face former Strikeforce champion Tarec Saffiedine in this weekend’s main event.

“The training is as hard as ever, but now I have more motivation to put on a good show,” he said when asked if his placement on the card makes any difference in his approach to the fight. “The stakes are higher and more people will be watching, and I want to display the best of my skills.”

Yet even with 16 pro fights under his belt and more UFC experience than Saffiedine, who is making his Octagon debut, Lim realizes that beating the Belgium native will be a task unlike any he’s faced before, but one he’s prepared for.

“Out of all my opponents, Tarec is the biggest threat I've ever faced,” he said. “He's a world champion and a great fighter.  If I beat him, I'll have overcome the greatest obstacle I have faced.”