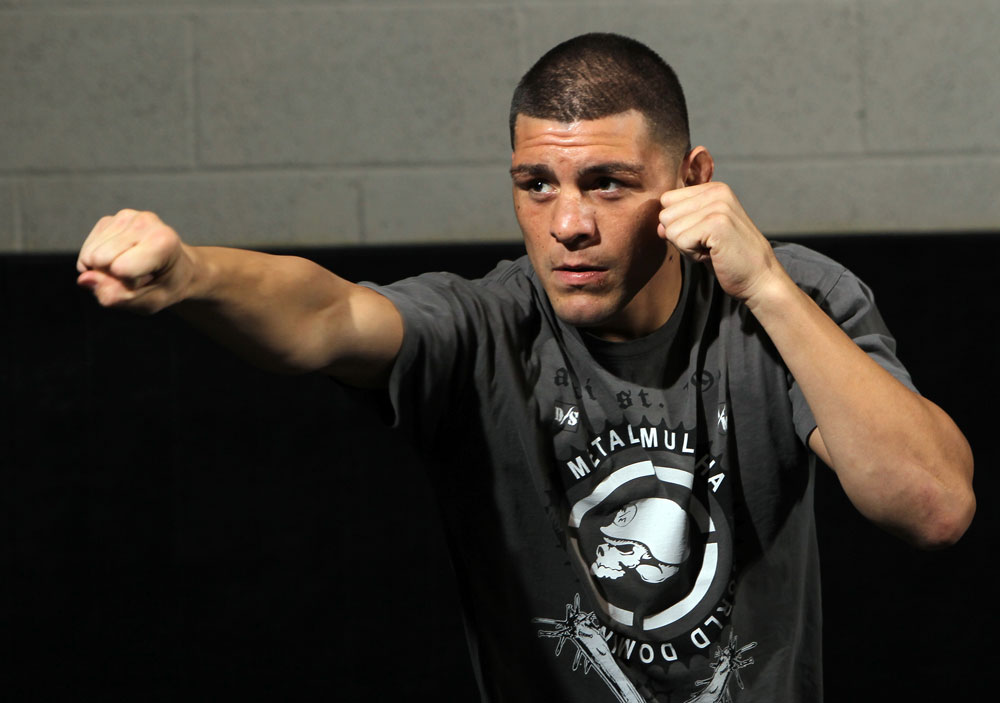 With a seemingly endless entourage, a hungry legion of reporters documenting his every move, and even many he doesn’t actually make, boxing’s pound-for-pound king, Manny Pacquiao, exists in the middle of a hurricane that can veer out of control and become destructive at any second.

But that’s the way the Filipino icon likes it, and you get the impression that if everything was calm around him, he wouldn’t perform quite the way he does in the ring. After watching the Nick Diaz show over the last month, it’s easy to feel the same way.

With his almost perpetual scowl (though there is some photo evidence of him smiling this week in Las Vegas), it looks like Diaz is only happy when he’s unhappy or when he feels that the world is against him. And this isn’t a new development; it’s one that’s been going on for years, subtly when he was in the UFC the first time from 2003 to 2006, and even more so in subsequent years. So when he no-showed the two pre-fight press conferences to promote his UFC 137 title bout against welterweight champion Georges St-Pierre and then got pulled from the fight, it was the perfect chip to put back on his shoulder.

But as he was brought back into the fold to face BJ Penn (a bout elevated to main event status when St-Pierre injured his knee and was forced to withdraw from a replacement fight with Carlos Condit), it put the spotlight squarely on Stockton’s finest again, and after trending on Twitter for showing up 45 minutes late to a recent media teleconference, he finally began speaking his mind on the whole topic of accessibility, responsibility, and the most important thing of all, the fight.

“I’ve just done my best to try not to focus on what’s going on and just try to live every day like it’s not a really a big deal because I don’t know what’s going to happen with me,” said Diaz when asked about the turmoil of recent weeks. “But it’s not going to make a difference whether or not I whine or cry about it or panic to get things done; I’m just going to do what I always do and train and when it’s time to fight I go fight and that really depends on whether or not I’m ready. And that’s really about me, it’s not about whatever’s going on in the world or whatever, who I’m fighting, who I’m not fighting. I’m not really going to have a choice on that, my job is to fight, so I have to fight when I’m told to fight and that’s why I do what I do, and that’s what I do well.”

He certainly does. 11-1 with 1 no contest since ending his first UFC stint in 2006 with back-to-back wins over Josh Neer and Gleison Tibau, Diaz has turned into a fighting and finishing machine outside the Octagon, where he only showed glimpses of the fighter he has become. His opponent this week, Penn, calls him the best boxer in MMA, and that’s coming from a fighter who had the same praise put on him by renowned trainer Freddie Roach. And that’s not even to mention his black belt level jiu-jitsu game, his unorthodox punches in bunches style, his cardio, and his chin. If he has any weakness at this point, it’s that his lone loss in the last five years (to KJ Noons) came via cuts.

That’s the good news. The bad news is watching Diaz squirm in his initial blast of the media spotlight, immediately becoming defensive when asked about missing his press obligations, and then even claiming that the Penn fight is an even tougher one for him because they had trained together previously.

“I’m not happy about it at all,” said Diaz. “I’m fighting a guy who’s my friend or was my friend and now I’m fighting this guy. I’m set to fight, assigned to fight certain guy (St-Pierre), I thought we had a deal.”

“This fight is a completely different fight,” he continued later on in the teleconference. “And I think BJ’s a lot better fighter to be honest with you. On the technical standpoint, he’s got much better jiu-jitsu, boxing, and even on a technical level, I wouldn’t count him out.”

“But I’m going to deal; this is hard times just like it’s been, but I’m not expecting it to get any easier. So this definitely doesn’t make anything easier for me. I don’t like fighting people I already know or I’ve already met or trained with or have video on me.”

All of these distractions, and all the tentative talk about fighting a respected former training partner could shoot up red flags for 99.9% of the fighters out there. But not for Diaz. In Thursday’s pre-fight press conference, the 28-year old seemed loose, tossed out a couple one-liners, and even cracked a smile or two. Why the switch? Maybe it’s because the hard work is done, the “beauty pageant,” as he calls it, is almost over, and now he can get down to fighting.

When all is said and done, that’s what matters, right? Not the pre-fight hype, but the fight. Perhaps the best line Diaz has had recently was when he was questioned about his late arrival to the UFC 137 call and said in an exasperated tone, as if the rest of us just didn’t get it, “you gotta know I’m not sitting here with my phone waiting for a call; I’m waiting for some training. I’m trying to get some relax time before I have to go back to another four hours of training. I’m training hard.”

And when he’s trained hard, he fights hard, whether it’s against a friend or a bitter enemy. On Saturday night, in the eye of his own unique hurricane, Nick Diaz will finally be at peace. It’s D-Day, and the only person he has to talk to in the Octagon is BJ Penn.