Hunter Azure Prepared For The Next Test

Hunter Azure is prepared to take on Cole Smith at UFC Vegas 9 this Saturday
By Thomas Gerbasi, on Twitter: @TGerbasi • Sep. 2, 2020

Hunter Azure is an honest fighter and an honest man. So he’s the first to admit that in the lone loss of his pro career against Brian Kelleher in May, he fell victim to the wrestler’s disease.

It’s a peculiar syndrome only experienced by those who have spent most of their lives on the mat before making their way to mixed martial arts, but the symptoms are evident to everyone once they show up.

In Azure’s case, he made it to 8-0 behind a wrestling-heavy attack, but with years of training in MMA, freed of the restraints of keeping his fists and feet to himself, he wanted to show off what he had learned in the fight with Kelleher.

And he looked damn good doing it, displaying power, accuracy, and variety in his striking attack against the New York veteran in the first round. But in the second, Kelleher roared back, caught Azure, and stopped him at 3:40 of the round. 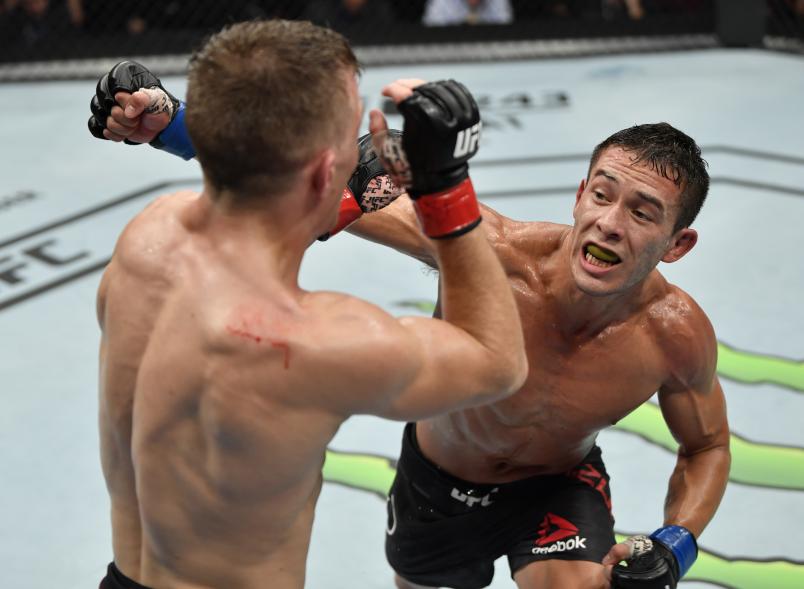 “Oh yeah, I'll admit to that,” Azure laughs. “It's a fight, so you're gonna get out there, let your hands go and it's fun. I loved every bit of that fight. It was fun, I enjoyed it. But I need to get back to my style. I gotta mix things and let the hands be there when they're there and add in wrestling because I definitely fell victim to that.”

On Saturday, Azure makes his first start since the Kelleher fight against Cole Smith, and while he had fun going toe-to-toe with “Boom,” he promises to mix things up more against his Canadian foe, who is also coming off the first loss of his pro MMA career.

“It was like the first time I really let my hands go and was feeling comfortable,” Azure said. “I felt great in that fight, I felt like I was winning pretty much every second of the fight, but in this sport, that's just how things go and I had to take it as experience. That was my ninth fight, and he had 31 fights, so it's just part of the sport. I'm gonna take it, there are things I gotta look back on and adjust and fix and keep rolling. I've lost plenty of times in wrestling growing up, so it's get back to the drawing board, keep doing what you do, and you've got to keep getting better every day no matter what.”

Having experienced being on the other side of the win-loss equation helped the 28-year-old deal with the sting of the setback, and a Fight of the Night bonus didn’t hurt, either, especially with Azure and his fiancée, Sage, now raising their young son Sage. But it did cause some concern from his family.

“It was definitely tough for my family and my fiancée,” he said. “I called them up right after and told them it's part of the sport. I'm fine, I'm happy and I was good, I was clear-minded. After I got knocked out, I woke up and I remember everything, getting up, walking out of the cage. It was just a bummer. It hurt my heart more than anything. Just that loss.”

But the beauty of this business is that there’s always another chance to get it right, and Azure gets his shot in Las Vegas this weekend. It won’t be easy, but those wrestlers don’t like easy.

“Everyone who they're gonna throw at me is tough,” Azure said. “I like the matchup; he has about the same experience as me. We'll both put on a good pace and be exciting, so I take it as just another step and another test they're throwing at me and I'm just gonna go pass it.”