Hunt takes "sixth round" from Bigfoot

MARK HUNT VS. ANTONIO SILVA
Their first bout in Dec. of 2013 was a classic war, but when Mark Hunt and Antonio “Bigfoot” Silva met again at UFC 193 in Melbourne’s Etihad Stadium Saturday, it was all Hunt, as the Sydney favorite stopped Silva in less than a round.

The rematch came nearly two years after the two battled to a five-round draw in one of the greatest heavyweight fights in UFC history.

Silva and Hunt traded kicks in the first half of Round 1, Hunt taking the lead thanks to some thudding shots to the leg and body. With 90 seconds remaining, Hunt made his move, first with a right-left punch combination that wobbled Silva’s legs. Then, seconds later, a right caught Silva behind the ear and sent him to the mat. Three right hands later, the fight was over, referee John Sharp intervening at the 3:41 mark. 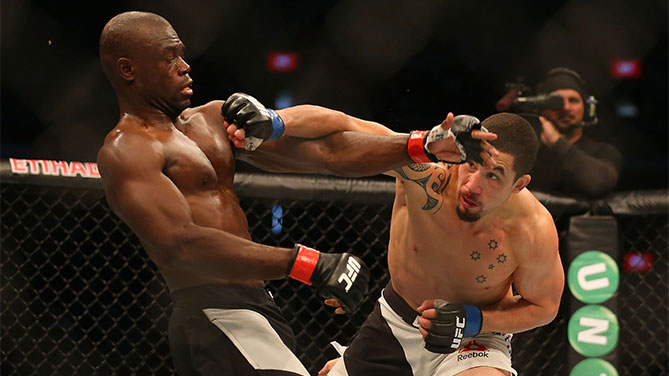 Sydney’s Robert Whittaker made it 3-for-3 in the middleweight division, winning a three-round unanimous decision over the No. 10-ranked Uriah Hall.

Whittaker was aggressive from the start and he landed the first big shot of the fight, a right hand that seemed to kick Hall into gear, as “Prime Time” began firing back with bad intentions after eating the punch. A wild sequence of spinning kicks by Hall didn’t end up so well when he got tangled up with his opponent and wound up on his back. Whittaker stayed on top, landing strikes as he moved into the mount position, but Hall kicked free. Whittaker kept working though, eventually taking Hall’s back. Hall turned into his opponent’s guard before the horn, but wasn’t able to do anything with it.

The second round featured more back and forth action, Whittaker landing hard kicks to the leg over and over while Hall finally began landing his bombs on the Aussie, who took them well.

Whittaker came out blasting in the final round, with a right hand hurting Hall and forcing him to cover up. After Hall survived the initial barrage he got locked up against the fence, visibly bothered by his left eye. With three minutes left, the two broke and Hall landed some hard shots, bloodying Whittaker. After a brief stay against the fence, the combatants resumed their stand-up battle, both scoring as the crowd roared. In the final minute, Whittaker got his second wind, capping things off with a takedown before the horn. 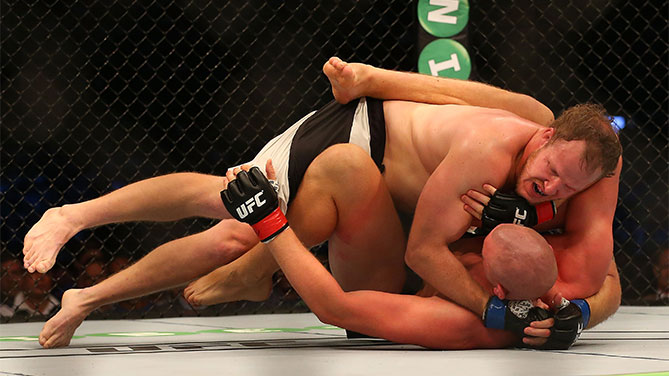 It may not have been pretty, but heavyweight prospect Jared Rosholt scored the biggest win of his career in the main card opener, winning a three-round unanimous decision over the Netherlands’ Stefan Struve.

After a long feeling-out period between the two heavyweights, Rosholt found his opening for a takedown and nailed it just before the midway point of the first stanza. Rosholt was able to keep Struve grounded for the rest of round, taking the frame on the scorecards, but not doing any serious damage, drawing boos from the crowd.

The slow pace didn’t improve in the second, but two takedowns by Rosholt midway through kept the Texan ahead on the scorecards, even though Struve was able to get off an upkick as well as some hard elbows just before the horn.

Struve’s jabs finally started hitting the mark early in Round 3, and they were beginning to have an effect on Rosholt, who was now backpedaling and not looking to get inside. Soon, Struve added kicks to the mix, but just when it seemed like Stuve was going to pull off the miracle comeback, Rosholt got a takedown and a breather in the final minute. That was the last gasp for Struve, who falls to 30-8 with the loss.